Arabic calligraphy as a typographic exercise

‘Arabic Calligraphy’ is a hybrid English term. ‘Calligraphy’, taken from the Greek kallos (beauty) and graphe (writing), is literally understood in the western perception as ‘beautiful (hand) writing’ of the Arabic language. Yet the Arabic term for what we call calligraphy invites closer inspection. Within the Arabic language the transliterated word ‘Khatt’ (خط) is derived from ‘line’, ‘design’, and ‘construction’. The philological connotations get lost in the translated term ‘calligraphy’. From a type design perspective I think this rather an astonishing difference. 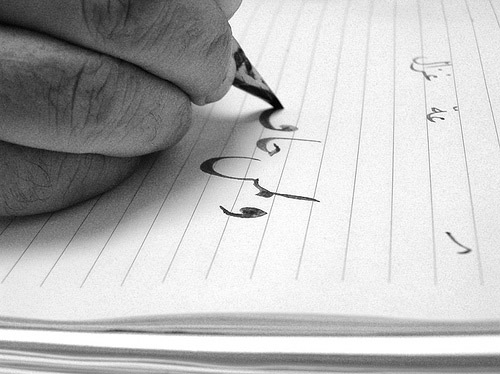 Western type is related to calligraphy, but not in the same way. The artistic practice of western calligraphy is nowadays clearly remote from the technical construction of digital type on screen. Still, calligraphy has come a long way, as has the development of type. In the beginning traditional type design took its cue from  the calligraphic writing techniques that punchcutters were imitating in the fifteenth and sixteenth centuries (see Fred Smeijers’ Counterpunch). Then, much later, came the counter-movement: a palette of non-calligraphic influenced typefaces that distanced themselves from the influence of the pen stroke; ultimately finding their expression in the Sans Serif types. And today we observe anew the calligraphic influences in Sans Serifs of the twentieth century (see Keith Tam on typeculture.com). 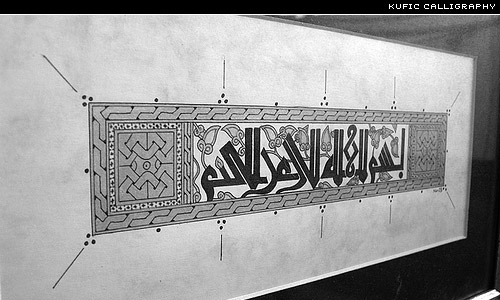 Typography nowadays enjoys a considerable public awareness, and numerous typographic techniques are accessible through scores of applications, but the calligraphic origins are differentiated. Still, we have a choice of calligraphic or non-calligraphic influences on typefaces. In cultures that have a writing system based on cursive scripts (and graphemes, such as Chinese characters) the calligraphic practice is the model for type design. These cultures have little choice to distance themselves from the scribes. Arabic, as one of the Semitic languages, is part of these cultures. Yet, at least the philological indication of Arabic’s terminology on calligraphy is marked by design and construction and a determining pre-step to Arabic type. Recognizing these distinguishing philological connotations illuminates the western traditional view on calligraphy’s significance in typeface development.

Within the Islamic culture the art of Khatt is understood as the art of the pen and an expression of the sacred. Though the common perception is connected with handwriting, the practice of Arabic calligraphy resembles, in many ways, more a type of lettering. Khatt is inspired and driven by religious contemplation and reverence. Figural representation of shapes in any form was ‘religiously’ banned, and so creative expression streamed forth in alternative forms — mostly concentrated on the word — decorating any kind of object.

Historically Arabic script has undergone different reformations, as well as influences of regional and epochal writing styles — mainly as the result of conquests, and conversions to Islam. Today the main styles have been categorized into six types. Details on the styles’ development can to be found here: islamicart.com, sakkal.com, and in the book Arabic Typography by Huda Smitshuijzen Abifares.

The modern market of global branding is today claiming the different calligraphic styles for reasons of typographic hierarchy. Thus the writing styles are not just calligraphic styles anymore, but have been absorbed into typography and are now also type classifications. At the same time the religious traditions of Islam still motivate and support the practice of decorating the holy word of the Qur’an.

The Kufic script (the name comes from Kufa, a city in Iraq) developed in the late 8th century, marking a clear traceable typographic approach within Islamic history. Kufic is still a common script, geometrically constructed with compass and ruler. Since it needs very accurate planning its calligraphers were and still are more like architects of the layout, the lettering and decoration — similar to the letter artists in Europe at the beginning of the 19th century who painted posters and facades. 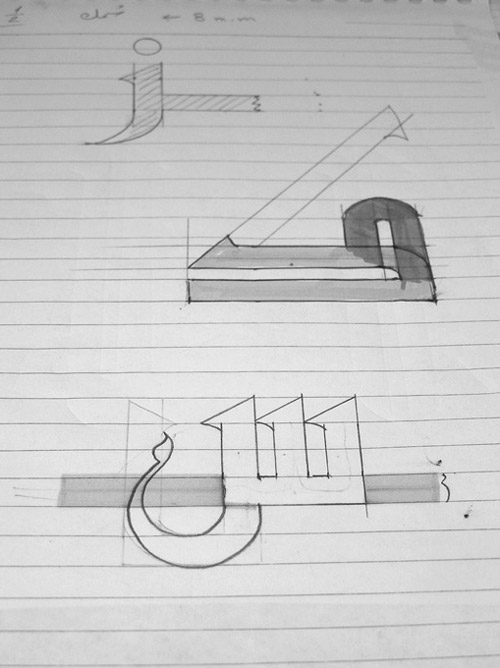 Kufic is still considered a script of lettering, known for the lengthy time to ‘write’ it. Fourteen centuries ago, with the rise of Islam, a script was needed to fit the pace of conversions, and the cursive and more handwritten scripts developed. Yet one should not believe that the cursive, rounder scripts are written so much faster than the constructed Kufic. If one is a trained master calligrapher the writing might flow quickly and easily, but the training to be one can easily take ten to twenty years.

Developed in the 9th century:
It is known as the script of the Qur’an and is the most ubiquitous; therefore, at times it is mistakenly referred to as the Arabic script. Writing this requires a round thin device, such as a point pen. A medium expansion of the hand movement follows above and below the writing line. 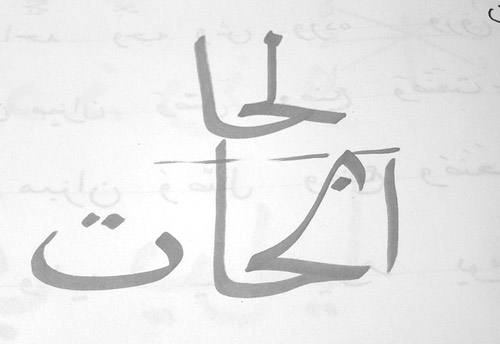 The script has voweling dots and all the letters follow beside each other from right to left.

Derived from a mixture of Thuluth and Nashker, 9th century:
It is a handwritten style still commonly used. The writing occurs only above the writing line. Certain consonants are written above each other before they hit the baseline. 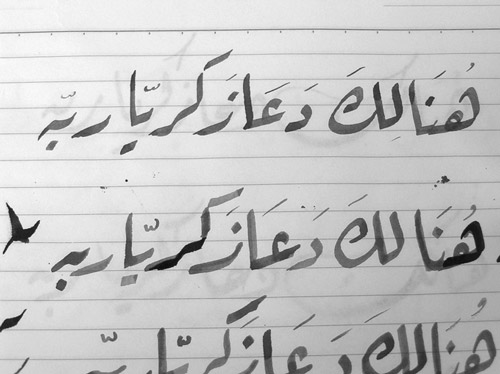 The writing device should be wider and flatter than the one used for Naskher. Voweling lines, though no dots, indicate the pronunciation, but the letter shapes can alter significantly from Naskher.

Developed in the 10th century, is still common:
This script (philologically related to ‘one third’) was an offspring of Nashker, and was developed as a display script to decorate in particular scriptural objects. Its most important letter is the Alif, the letter dedicated to Allah. The script has an x-height of one third of the reoccurring patterns of the long stems/verticals (Alif). 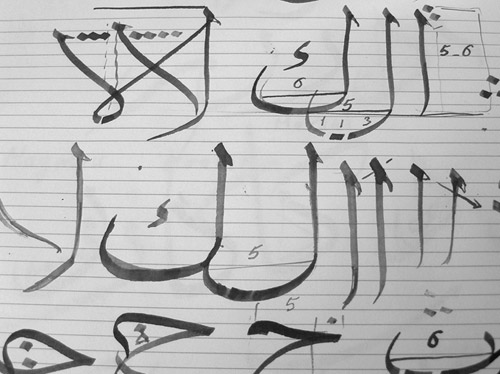 The letters are placed mostly beside each other, with accompanying broad letter spacing. A medium size bamboo pen and a patient hand will lead to true Thuluth shapes. 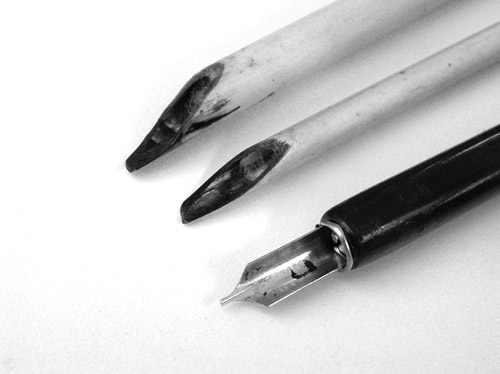 Developed in the 10th century, its peak was in the 17th century:
It peaked owing to the Ottomans, who highly admired it and used it extensively. It is easily recognized by its distinguished curves. This script is not written with dots, but rather it shapes different forms for each letter’s recognition. The consonants can be arranged beside each other or on a tilted axis of 45°. 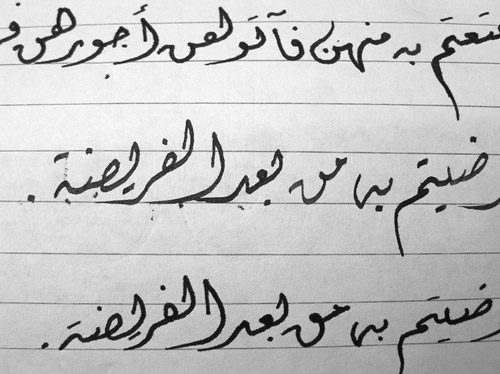 A beautiful curviness contributes to the extended flexibility. A slim reed or bamboo pen works well with this script.

Developed in the 9th century, had its peak in the 14th / 15th century:
Tal’iq came from Persian culture (having a whole history before the influence of Islam), and was absorbed through religious conversion. Tal’iq has the most significant recognition in the long drawn letter shapes extending the word image. Tal’iq (meaning ‘hanging’) is written tilted towards the right along a baseline, only rarely crossing it. 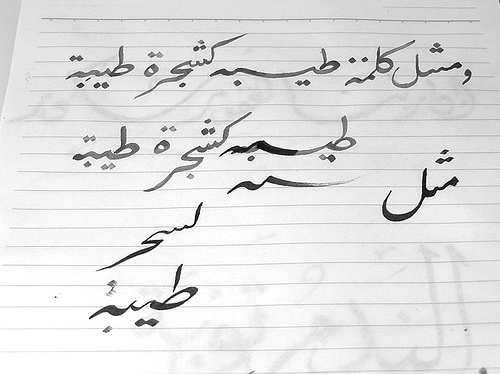 Another hallmark of the script is its rhythmic pattern of wide-shaped horizontals and slim and narrow-drawn verticals. The writing tool should be a broad-nip pen or bamboo pen.

My motivation to study Arabic calligraphy was solely a typographical one — in a sense a typographic exercise. I exposed myself to a foreign script, language, and reading habit to train the eye, challenge my perception and examine the outcome. I focused mostly on the essential: the practicing of Arabic scripts. I studied the historic and scholarly aspects of Khatt a little, but I learned the different writing styles and measurements of letters, and found myself quite capable of reproducing these. The experience was unique: I was able to observe consciously the type of learning process a preschool child would go through. In order to learn the handwriting I had to copy letterforms whose meanings and sounds I understood only afterwards.

The interesting fact about Arabic writing, as I experienced it, is that although the script is so flexible (see Calligrams), it is many times precisely measured with equivalents of drawn dots in between the white space of the letter forms. Too little white space between the letters will be considered illegible and therefore not a valid shape. The slowness of calligraphic writing is equally caused by the many moments of lifting the pen to draw a transition, outlining the shape first, and filling in the ink later (especially in the case of Farsi) — reminiscent of lettering design. 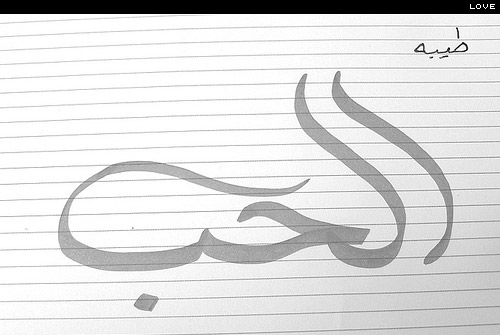 Calligraphic writing is not just a contemplative art or simply an historical and psychological exercise. It requires not just an accuracy of measurements and the knowledge of alphabets. Calligraphic writing leads to the understanding of shapes and forms. Following the fact that one sees only what one knows, the calligraphic practice certainly causes one to look closely.

My typographic exercise made me look from the Arabic calligraphic practice to the European interrelationship of calligraphy and type. The outcome has left me with an interest in other calligraphy traditions and their influences on inter-linguistic type.

In the Islamic culture the respect for calligraphers is, by far, greater than its awareness of type designers. Similarly so in the Chinese culture. Likewise a related phenomenon occurred in Europe in the fifteenth and sixteenth centuries, when the transition from calligraphic handwriting to punchcutting and letterpress printing occurred. I see Arabic type design in a similar context to the interwoven development of type design and calligraphic influence.

Arabic Typography, which ultimately builds upon calligraphic writing styles, nowadays receives more attention. Though the broad public shows little awareness, the modern development of Arabic type has caused a new interest in the future state of its typography. Having a remarkable relation to its cultural embedment in design and construction, the shift and merge from traditional calligraphy to a mature typography will be a most interesting development to observe.

[ After completing her Graphic Design Diploma in Germany, Julia studied Arabic Calligraphy for six months in Egypt. This coming fall she will begin the MA Typeface Design program at the University of Reading. ]