Fashion is a global, multi-billion dollar industry. From haute couture to five-dollar tees, it is inescapable — at least for those of us who wear clothes, that is. It is supported and promoted by vast publishing enterprises of glossy magazines and books and million-dollar advertising budgets. And although, arguably, we might say that fashion got its start when humans began wearing clothes 170,000 years ago, fashion as an industry was only really possible after the Industrial Revolution. But centuries before Coco Chanel and Yves Saint Laurent, and long before the first fashion shows of the late nineteenth century, we find seeds of an industry in the very first fashion publications.

When it comes to the ‘first fashion book’, Matthaus Schwarz comes to mind, (1497–c. 1574), the German accountant for Renaissance ‘billionaire’ banker Jakob Fugger. Over the course of four decades (1520–60), Schwarz commissioned local artists to faithfully catalogue, in detailed watercolors, his and his brother’s sartorial vie quotidienne.

Although Schwarz’s handwritten book, Klaidungsbüchlein, is a marvel of sartorial splendor, his endeavors were a personal chronicle, rather than part of a broader enterprise. In that respect he was well ahead of his time, born 500 years too soon for Instagram and the selfie revolution. But the first true fashion publications were not single-copy or unique handwritten books but printed books and booklets. We shall come to them in a moment.

A page from Matthaus Schwarz’s Klaidungsbüchlein (‘A Book of Clothes’) compiled between 1520–60.

New genres
The early decades of the sixteenth century were fertile grounds for new genres of books. When the printed book was in its infancy, printers and publishers were usually risk averse, printing mostly those books that had been popular even before the invention of print. Medieval staples like religious works, school text books (e.g. Latin grammars) and medieval tales of courtly love and romance. By the next century, the printing industry had found its feet and was all the more ready to experiment with new genres of literature. An added factor in their willingness to take risks was economic: a growing book-buying public and falling paper costs meant books became cheaper to produce.

Ornament
At the end of the fifteenth century, printers began to experiment with prints of ornamental designs — as single sheets or gathered into booklets. Their purpose was artistic and inspirational — a kind of Renaissance look-book, if you like — or a way to share and disseminate new ornamental designs and motifs.

Those patterns were used across many arts and crafts. Their broad audience is even explicitly referenced in their titles. One German ornament book of 1538 is titled (long before short titles were a thing), “A new and wonderful little art book such as has never been seen by anyone or published; very useful for painters, woodcarvers, goldsmiths, stonecutters, carpenters, armorers, and cutlers.”* The same patterns might be engraved on a dinner-knife handle or on a piece of jewelry or feature as an architectural detail on a wooden screen or carved in stone or embroidered in fabric for soft furnishings, rugs, tapestries or clothing. Although this kind of book was aimed primarily at professionals, they were sometimes marketed to masters and amateurs alike. The same author of the above-mentioned ornament book of 1538, states that his book is intended, ostensibly, for those lacking the artistic talents to draw their own designs, for those whom we nowadays might term hobbyists.

The popularity of ornament books sped up the spread and international exchange, especially between East and West, of new decorative designs and motifs. They were usually small-format, slim volumes or booklets and thus relatively inexpensive. The single-sheet ornament and artistic prints later became a flourishing industry in their own right, with Hieronymus Cock (c. 1510–70), the famed Flemish painter, printmaker and publisher, instrumental in their early success.

Da Vinci & Dürer
Arguably the most famous patterns to emerge at this time are those designed in the 1490s by none other than Leonardo da Vinci. While in Milan, he applied his talents to the design of a series of six intricate interlaced designs, known as the ‘The Six Knots’. 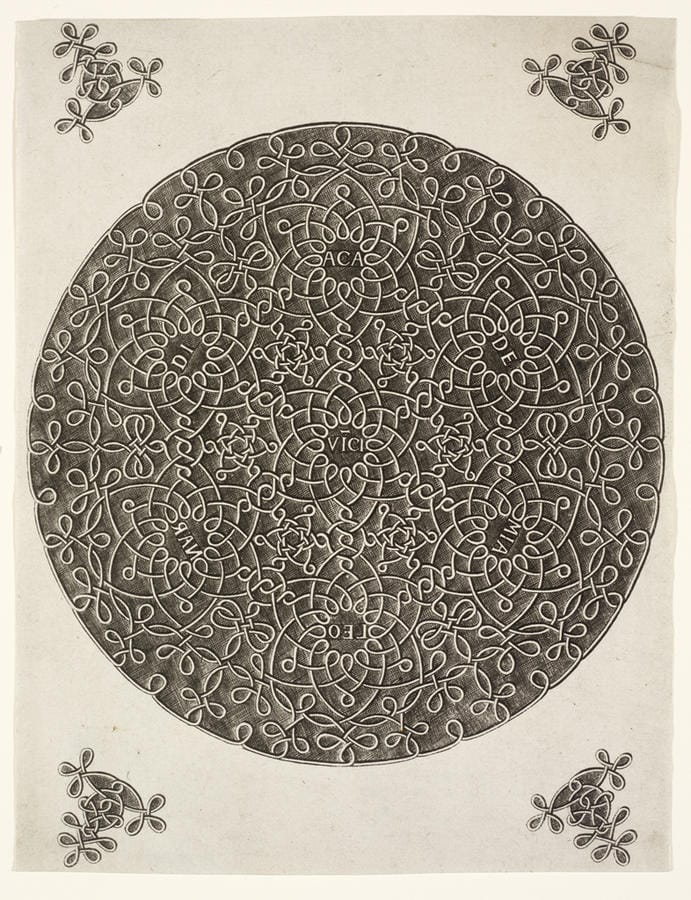 Such knot patterns were the height of fashion in 1490s Milan and can be seen adorning the dress of Bianca Sforza in Da Vinci’s striking ink and colored chalk portrait.

To make Leonardo’s rare series of knot designs available north of the Alps, they were copied as woodcuts by Leonardo’s Northern Renaissance counterpart, the brilliant Nuremberg artist and print-maker, Albrecht Dürer (1471–1528).

Left: Albrecht Dürer’s woodcut of Leonardo da Vinci’s The Fifth Knot. Before 1521. Incredibly, the original woodblock used to print this design has survived and is now in the Museum Bautzen in Germany; right: Portrait of Bianca Sforza by Leonardo da Vinci, 1490s. Note the knot-work patterning across the shoulder in the magnified detail.

The First Pattern Books
From this new ornament book genre, we begin to witness specialized editions, focusing on patterns and ornaments for specific crafts. The pattern or model book was one of the most popular sub-genres to emerge. They contain patterns for lacemakers and weavers for the design of textiles and thus can be considered the first printed fashion publications.

It is no accident that the first fashion publications should appear during this time. New materials and fabrics, innovative tailoring and sewing techniques and growing urban populations, meant that clothes came to be, more than ever, expressions of personal will, of individualism and social status. As Ulinka Rublack writes in her introduction to The First Book of Fashion, that during the Renaissance “a passion for fashion became a broad social phenomenon.” The earliest known textile pattern book, the first printed fashion publication, was printed in Augsburg in Germany in about 1523, at the print-shop of Johann Schönsperger the Younger, a letterpress printer and fabric printer with workshops in Augsburg in the south and Zwickau in central Germany. Schönsperger printed several other popular model books during the 1520s — his second went through five editions. Among their pages of design patterns for weaving and embroidery are letter designs These Renaissance ‘pixel’ fonts, centuries before their appearance on our screens, would have proven invaluable additions to those wishing to embroider initials onto a piece of clothing or a pithy Latin phrase onto a tapestry.

Of Schönsperger’s first pattern book, only a single copy has survived. In fact, intact pattern books are now very rare. They did not sit pristine on library shelves or on the desks of scholars, but were put to use in workshops, sewing shops, parlors and classrooms; often their pages torn out, tacked to a wall for reference, or pricked and pounced to transfer their designs onto fabric.

In some of these books we also see distant forerunners of periodicals or magazines. Alessandro Paganino’s Libro quarto de rechami (‘Fourth Book of Needlework’), published in 1532 (see below), is the fourth in a series of quarterly pattern books, with the author even opening with a kind of ‘letter from the editor’ addressed to its readers.

§ Is pouncing alien to you? This video from Christie’s explains all.

Another interesting development was the production of books without any designs — just pages with printed grids — some 200 years before the ‘official’ invention of graph paper (for math) at the end of the eighteenth century. Below is such a book from Germany or France, produced right at the end of the sixteenth century. The entire book is printed with a grid, or graph paper, from woodblocks. The designs have been penned and painted in by the book’s anonymous owner; several even in color.

Some of the designs would be just as at home in a twentieth-century 8-Bit arcade game.

‘There are essentially two methods of making lace: both involve the manipulation of fine linen thread & they are commonly referred to by the names of the tools used. Needle lace requires the use of a single thread & a needle to make stitches one after another which gradually build up a fabric. Bobbin lace uses many threads attached to small bobbins, which are interwoven in various combinations to create a pattern.’ — FHT

In the second and third quarters of the sixteenth century, with the development of new lace-making techniques like punto in aria (literally ‘stitch in the air‘) devised in Italy, more free-flowing designs began to appear; ones not constrained by the natural grid or warp and weft of linen. In light of this, some artists abandoned the woodcut in favor of engraving and etching in metal — mostly as a means to produce finer details in their designs. In Rome, the Italian artist and engraver Isabella Parasole (c. 1575–c. 1625) designed and published four lace pattern books (using woodcut and metal engraving), including her 1616 Teatro delle nobili et virtuose donne, a book of lace and embroidery techniques and patterns. It proved so popular that she published it in several editions.

Unlike most of her contemporaries, Isabella’s designs were presented on a dark background. Isabella was the first female designer to be explicitly acknowledged as the author of a pattern book, with the publication of her Spechio delle Virtuose Donne (‘Mirror of the Virtuous Women’) in 1595. The word ‘virtue’ and the Italian play on it, virtuoso, were frequently used in pattern-book titles. Needle-working was long considered a virtuous endeavor for women. Even the Virgin Mary, the epitome of virtue, was traditionally depicted sewing or embroidering.

From Rome to Bologna and the lace books of artist and lacemaker Bartolomeo Danieli. He produced five books between 1610 and 1639. His are among the most impressive of the genre and they demonstrate how the engraver’s needle, rather than the woodcutter’s graver, is especially well-suited to faithfully reproducing the thousands of fine threads in a piece of lace.

At around the same time, at the close of the sixteenth century, some German printers of lace books also began to use metal engraving and etching to reproduce their lace designs. The first German lace pattern book printed from copper plates, Schön Neues Modelbuch, [PDF] was designed by Johann Sibmacher and printed in Nuremberg in 1597. Once again this book, in addition to patterns for lace, embroidery and weaving concludes with eight pages of plain graph paper in two sizes of grid, so that readers might add their own designs.

Schön Neues Modelbuch, 1597. Designed by Johann Sibmacher in Nuremberg. The engraved title-page depicts embroidering, lacemaking and weaving. The woman left-front is consulting her pattern book. Note too the figure on the right wearing spectacles. Image courtesy of The Met.

From Pattern Books to Prada
Even for a dyed-in-the-wool non-fashionista like me, the history of fashion, from those first printed pattern books to the upending and technological transformations wrought by the Industrial Revolution and fashion born again as a burgeoning industry, is fascinating. From those first ornament prints and pattern books, the early involvement of brilliant artists like Leonarda da Vinci and Albrecht Dürer, and the industry, innovation and artistic talents of countless printers, tailors, lacemakers, embroiderers, weavers, engravers, and woodcutters — all forerunners of one of the world’s largest industries. So the next time you slip on your sweat pants and Jimmy Choos, you’ll be reminded of the first printed book of fashion printed in Augsburg by Johann Schönsperger in the early 1520s, of Renaissance pixel fonts and the invention of graph paper. ▦