News existed long before we invented writing. A hundred thousand years ago, it echoed off cave walls when we first began to speak. In that preliterate prehistory, and for a long time thereafter, news traveled by word of mouth: Local gossip shared around the campfire after a hard day’s hunting and gathering; news from farther afield might reach us via a rare traveler or exile. And then, when we mastered writing, news stories became artifacts, permanently recorded episodes in our cultural history.

In the Middle Ages, news, especially foreign news, was an expensive commodity, and only available to those rich enough to support a network of agents and messengers. The world was unimaginably different to the one we inhabit today. Travel was slow and dangerous and, whereas nowadays news travels literally at the speed of light, it was once limited by how fast we could run, how swiftly horses galloped, and by how favorably prevailing winds carried our ships. And those natural constraints on the speed of travel limited the pace of news.

Invariably, people lived intensely parochial lives, with few ever setting foot outside the town or village they were born in. Long before tourism and travel for pleasure were a thing, fairs and pilgrimages were among the few opportunities medieval people had to meet and exchange news with others from farther afield. News as a regularly published genre simply didn’t exist. In fact, the medieval world was just not prepared for it. But that was about to change.

In Italy, from about 1500, a new kind of manuscript began to circulate. These avvisi, also known as gazzettes, reporti, corantos, and zeitungen were short handwritten news-sheets reporting on international politics and international commerce. At the beginning, Rome and Venice were among their most enthusiastic proponents, and for obvious reasons. Rome as God’s European HQ and Venice a major international commercial hub and maritime empire. But why were avvisi not made obsolete by the advent of printed newspapers? How could a manuscript news service survive for two centuries alongside cheap, mass-produced printed news?

Left: Avviso dated 1552, from Antwerp about the political machinations of France, England, & the Empire in relation to Flanders.
Right: Avviso dated March 25, 1550, from the French court, discussing, among other things, the recently elected Pope Julius III. Photos from the Medici Archive Project

It’s important to understand how avvisi differed from the impending printed newspapers. They served very different audiences, and so didn’t directly compete. The avvisi were written by those in the know, by intelligencers close to the seats of real power, both secular and religious. Avvisi also earned a reputation for reliability. And, although the avvisi were not averse to regular gossip and quotidian affairs, they also excelled at social commentary, power politics, international diplomacy and commerce — the kind of news indispensable to aristocrats, politicians and business leaders. In Italy, the Medici, and in Germany, the Fuggers are examples of powerful, wealthy and influential dynasties that relied heavily on news and intelligence gathered in avvisi. The historian and author of The Invention of News, Andrew Pettegree, describes them as ‘well-sourced, dispassionate and reassuringly expensive’ — factors contributing to their longevity.

Although printing began in Europe in the 1450s, the fifteenth century was not a time for innovations in the kinds of publications produced. During that first half-century, printed output was almost identical to what had been handwritten throughout the later Middle Ages. However, by the sixteenth century, printers had ironed out most of the wrinkles, so to speak, and they now had a better feel for the market. It was time to experiment.

Gazette was one of many names given to early newspapers. It’s not altogether certain where the term originated. It might be from gazetta, the name of an old Venetian coin; or it could be derived from the ancient Greek via the even older Persian word, ‘gaza’, denoting a treasure or treasury.

In the late 1500s, a number of printed news publications began to appear. Some resembled newspapers but they were published too infrequently to really qualify as bona fide newspapers. For example, the Mercurius Gallobelgicus was published in Cologne in 1592, and ran until 1635, but it was published only twice a year. However, in 1605, Johann Carolus, a young German stationer and printer in Strasbourg petitioned the city council for a license or privilege to print something new. He decided to take his handwritten news pamphlets and print them. In doing so, in the autumn of 1605, he created the first printed newspaper, the Relation aller Fürnemmen und gedenckwürdigen Historien. No doubt, Carolus saw in printed news an opportunity to reach a larger audience while making a little extra money. 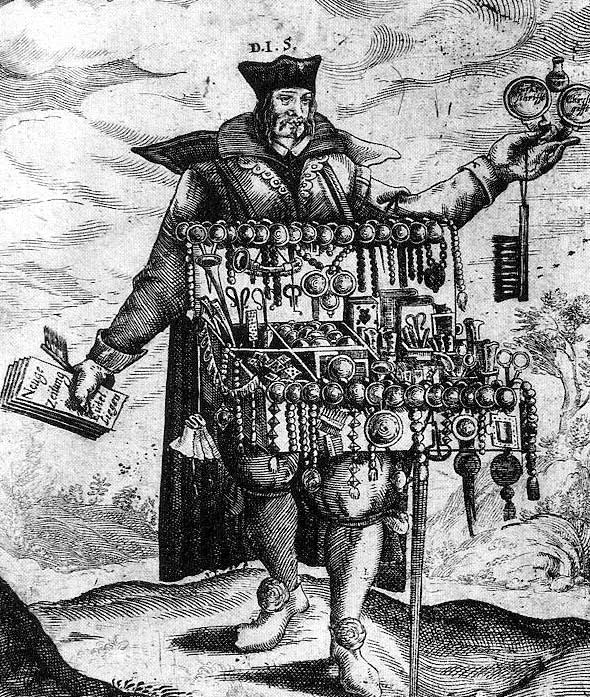 An early modern German peddler. Note the copies of the newspaper, Neue Zeitung, in his left hand. (Fig. 6.3 in Pettegree, 2014). Princeton Univ. Library

Other cities soon followed suit, and in the subsequent several decades, printed newspapers were launched in Basel, Frankfurt, Vienna, Antwerp, Hamburg, Berlin, Amsterdam, London, Stockholm, and by 1631, in Paris too, with France’s first weekly newspaper, La Gazette, published by the multi-talented French physician Théophraste Renaudot. Many of these nascent newspapers were published several times a week. The first daily newspaper, Einkommende Zeitungen, appeared in July 1650. It was a four-page paper published by the Leipzig printer, Timotheus Ritzsch.

As a rule, the earliest newspapers did not feature illustrations, although they frequently bore a printer’s mark or a decorated border on their front- or title-pages. In fact, not until the nineteenth century would pictures in newspapers become more commonplace. The Times newspaper, founded in 1788, didn’t print its first picture until 1806 — a murder-scene floor-plan. But the first decades of the 1800s mark the emergence of the illustrated press and hugely popular titles like The Illustrated London News, the first illustrated weekly news magazine; and The Penny Magazine, which in its heyday sold more than 200,000 copies. If newspapers were to compete with these lavishly illustrated periodicals and even cheap print like the illustrated and sensational ‘murder broadsides’ (the topic of a future article), then pictures were the future.

Left: The Penny Magazine, an early illustrated periodical. December 27, 1834. Center: Page from The Illustrated London News, for a feature on the horrors of the continuing slave trade. September 27, 1856. Right: A ‘murder broadside’ from c. 1826. Photos: Heritage Auctions, Wellcome, & the British Library

* Long before they appeared in Europe, Egypt, ancient Persia (modern-day Iran), and most notably China, all had limited postal systems. In Europe, the first of note was developed by the Romans during the reign of Augustus Caesar (27 BC–AD 14). Sadly, the Roman postal system went the same way as the Empire.

It’s no coincidence that newspapers appeared when they did. At least three associated factors were crucial to their emergence and success: Mass production made possible through the printing press; the broad availability of inexpensive paper; and an infrastructure, most crucially the development of postal systems,* to support both the gathering and dissemination of news.

The Industrial Revolution saw global newspaper circulation rise to all-time highs. The mechanization of printing, typesetting, and paper-making meant that newspapers could be printed quickly and inexpensively in hundreds of thousands of copies. More than that, those technological advancements coincided with the rapid expansion of railroads and the invention of the telegraph turning newspapers into global mass media. Some predicted that the telegraph would be the downfall of newspaper publishing, but quite the opposite turned out to be true, with newspapers becoming its biggest customers. By 1860, in the United States alone, there were already 3,600 newspapers, up from 200 titles at the turn of the century, with a combined circulation in the hundreds of millions.

From prehistoric gossip to town criers and diplomatic dispatches; from avvisi, or handwritten newsletters of the sixteenth century to printed news-sheets and newspapers of the seventeenth, we have always been captivated by the news. For four centuries now, newspapers have informed, reported, commentated, celebrated, persuaded, and even infuriated. But when it comes to immortalizing our failures and successes, of charting the vicissitudes of our species, perhaps no other medium has done a better job than the newspaper.◉

Header image: Detail from a Caricature of a Bristol newspaper vendor, Oct. 22, 1796.
Footer image: Not Elvis, but the death of King George VI in 1952. Photographer unknown.