There was universal consensus that the Plague was a punishment from God, either for general depravity and sin in general or for specific incidents; for example, some English writers believed that early outbreaks of plague were God’s punishment for recent and indecent fashion trends. The Pope called it, ‘a pestilence with which God is afflicting the Christian people’; the Emperor, ‘a chastisement from heaven’.

Plague books were produced long before the European invention of print. Manuscript plague treatises began to appear in 1348 at the start of the pandemic.

The first printed plague book appeared in 1473. Written by the Ulm physician Heinrich Steinhöwel, it was printed by Ulm’s first printer, Johann Zainer, who established his print-shop in early 1473.

As there was no cure for the Black Death, its spread was most effectively slowed by the implementation of mandatory quarantines and voluntary social isolation; the latter and most famous literary record being Giovanni Boccaccio’s Decameron, a collection of short stories recounted by characters who had fled the city of Florence when it was visited by the Black Death. Despise not comprehending the true cause of the plague, or understanding precisely how the disease was spread, those precautionary measures undoubtedly saved many lives. Similarly, Pope Clement VI, in Avignon, was spared when his doctor ordered that he be isolated in his chambers and, that despite the summer heat (and it gets hot in Avignon), fires be lit on either side of where the pope was seated. This had the probably unintended but fortunate effect of killing fleas that carried the deadly plague bacterium.

Although quite a number of scholarly plague books were published in Latin, the most popular were those written in the vernacular. Both the language and the kinds of recipes for proposed cures or immunization were simplified for a broader lay audience. The contents were a mix of spiritual and medicinal salves aimed at restoring one’s physical and spiritual well-being.

Plague Saints
For the most part vernacular plague books were not illustrated, although the very first example, from 1473, does open with a fancy border and an historiated initial (a capital letter illustrating a story) depicting the attempted martyrdom of Saint Sebastian. 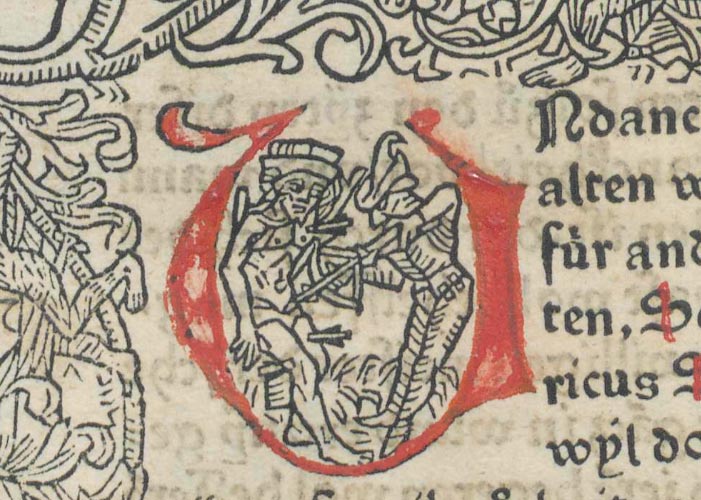 Increasingly, plague books were printed with illustrated title-pages. Most often they were depictions of Saint Sebastian or Saint Roch. It is not entirely clear how Saint Sebastian, famed for being shot full of arrows, became the most popular of the plague saints. But arrows had come to be seen as symbols of God’s retribution (arrows rain from the heavens) and then with the plague as a manifestation of God’s wrath. As an aside, Saint Sebastian is also the patron saint of — yes, you guessed it — archers! A crappy accolade for a guy shot full of arrows.

Unsurprisingly, thoughts and prayers proved ineffectual in a worldwide pandemic that led to the horrific and painful deaths of tens of millions. Some of the medicinal remedies were concocted by charlatans and quacks, with numerous treatments and cures only killing their patients sooner — salves of herbs and excrement for puss-filled Bubonic boils, and bathing in urine proved unsuccessful. With no cure available, quarantining and ‘social distancing’ were most effective in limiting its further spread. These days, the Black Death and the bacterium Yersinia pestis that causes it, still exists, infecting several thousand annually, but if diagnosed promptly, then it is successfully treated with antibiotics, an invention of the twentieth century.

Erik A. Heinrichs, Plague, Print, and the Reformation

Rachel Barclay, ‘The Reformation of a Plague Saint’

Daniel Defoe, A Journal of the Plague Year

next: Road-trips & the Invention of Print