Born in December 1571 in southwest Germany, Johannes Kepler would go on to become one of the greatest observational astronomers of all time. He would also write books that forever transformed our view of the cosmos. He is best known for his three laws of planetary motion that describe the motion of planets around the sun and were expounded across two books, The New Astronomy (1609) and The Harmony of the World (1616). He also wrote about optics, chronology, sunspots and even published a treatise on how to accurately calculate the volume of wine casks. He combined a magnificent intellect with unbounded curiosity.

This article is the first in a new series called 5-minute books – concise articles that can be read in under 5 minutes.

One day during the winter of 1611, while walking across the Charles bridge in Prague, Kepler noticed several snowflakes that had landed on his coat. While he observed that each appeared unique in design, he also noted that all shared one thing in common – they all had six sides or corners.

* The earliest recorded account of the sixfold symmetry of snowflakes is from the Chinese scholar Han Yin in 135 B.C.

Below: a small woodcut from Kepler’s De nive sexangula showing the natural hexagonal lattice in the compact stacking of spheres – first mathematically analyzed by Thomas Harriot in c. 1587, as a solution to the most efficient way to stack cannonballs on ships. 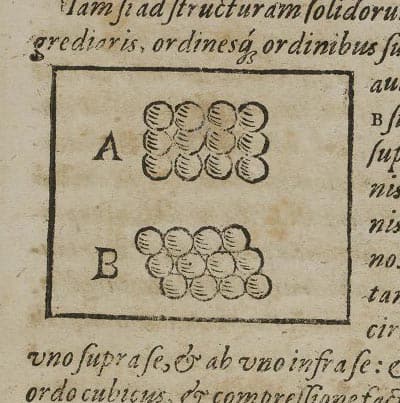 In trying to understand why all snowflakes were six-sided,* Kepler looked to other examples in nature. For example, he knew that spheres, whether oranges or cannonballs, when packed or stacked most efficiently, form a hexagonal pattern and he speculated that an analogous stacking of water droplets might explain the hexagonal structure of snowflakes.

He published his meditations in the form of a letter addressed to his friend and benefactor, the scholar Johannes Matthäus Wackher. The 24-page pamphlet, De nive sexangula (‘On the Six-Cornered Snowflake’), was published by Gottfried Tampach in Frankfurt on Main in 1611. Fifteen copies have survived.

As the book is in the form of a letter, it is set in italic with a fine set of swash capitals. Marginal notes are thus presented in roman type. The text is illustrated with three small thumbnail woodcuts and a five-line decorated initial or dropcap. On the title-page is a larger woodcut of the printer’s mark depicting, what appears to be Aphrodite riding a dolphin, surrounded by scrolls, cartouches and lyre- and flute-playing putti.

Kepler concludes his often playful and witty musings by admitting that the question why do snowflakes have six sides defeated him and that it now lay to someone else to answer. The answer to the six-sided symmetry of snowflakes would not come for another 300 years, when a farmer-scientist from Vermont, Wilson Bentley, began photographing snowflakes in the 1880s. He paved the way for physicists like Ukichiro Nakaya in the 1930s. A comprehensive answer to Kepler’s question, posed in 1611, did not fully materialize until the 1980s!

next: Underground World & the man who knew everything