Written by Niccolò Machiavelli in 1513, The Prince is undoubtedly the most famous political treatise of the Renaissance and a book that is, if not actually read, familiar to many even today. More than 500 years after its first publication, it still remains both popular and controversial, surviving in popular culture through the adjective Machiavellian, a by-word for political machination, amorality and that ultimately, virtue must bow to expediency.

Printing the Prince
Although quite popular during Machiavelli’s lifetime, The Prince was not printed until after his death. The first printed edition was published in January 1532 in Rome by Antonio Blado (1490–1567), with a privilege or formal protection granted in 1531 by the Medici pope and nephew of Lorenzo the Magnificent, Clement VII. The privilege was a kind of copyright protection — long before copyright proper — that granted Blado exclusive printing rights for Machiavelli’s writings, throughout Christendom, for a period of ten years. Among my favorite features of this edition are its italic z-ligatures.

Such calligraphic flourishes were extended to a full alphabet of letters when the master calligrapher and former papal scribe turned type designer and printer, Ludovico degli Arrighi translated those forms into metal type with the first swash capitals appearing in 1524.

Four hundred and eighty-two years later, New York type designer Christian Schwartz described the swash as ‘the tea cosy of typography’, prescribing restraint with, ‘swashes are like salad dressing: great as a condiment, but you wouldn’t want to drink a whole glass’ — sound advice for anyone but Marian Bantjes.

Examples from the first swash capitals font. Designed by Arrighi. Appearing here in Coryciana, a collection of Latin poems, printed in Rome in 1524. 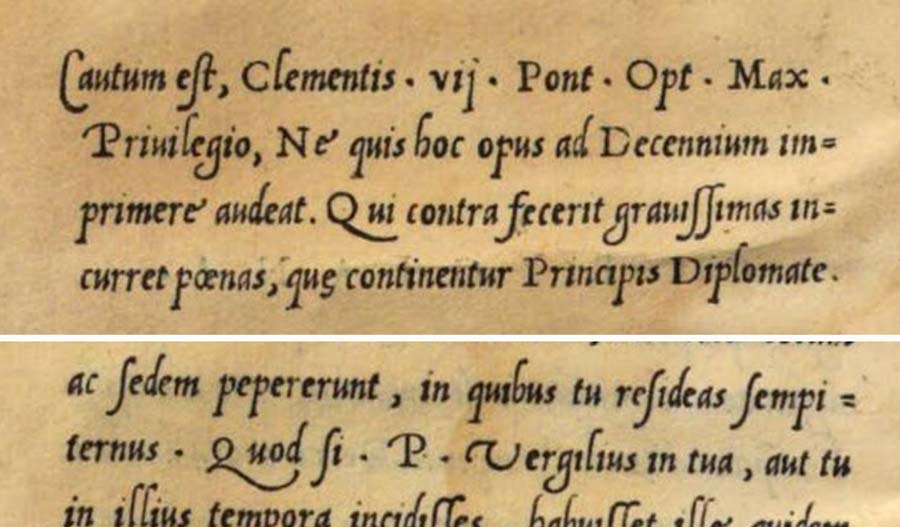 Also of interest are the fleurons* or printers’ ornaments on the title-page. These ornaments first appear in printed books from 1505 (although initially their use was epigraphic rather than ornamental) and appear with increasing frequency from the 1520s, especially in France and Italy. The smaller ornament (3 mm) on Blado’s title-page was first used in a book printed by Elisabetta Rusconi in Venice almost ten years earlier. The second larger ornament (10 mm) first appears in Venice and Perugia in 1525. Those ornaments were well travelled, especially as during the early 1500s making fonts was increasingly outsourced to professional type-founders — type designers and punchcutters.

§ Lucantonio Giunti expanded the family business beyond Florence by establishing a publishing center in Venice in the late 1470s, at first as stationers selling books and paper and later as publishers and printers, becoming one of the biggest and most profitable firms in early sixteenth-century Italy. For more on the Giunti, see ‘An International Renaissance Publishing Family: The Giunti‘ and Angela Zhang’s ‘Giunti Press‘. 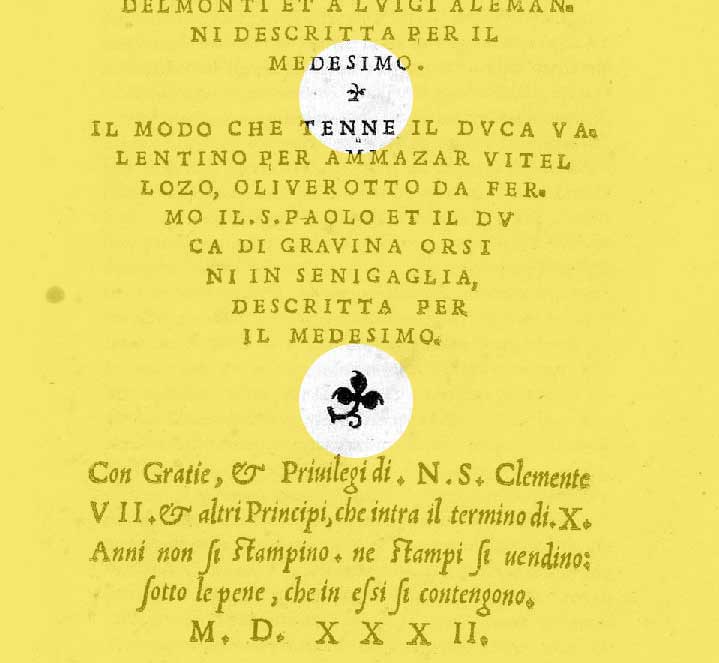 The ‘exclusive’ papal protection granted to Blado was shortly thereafter extended to the famed Florentine family of printers, the Giunti.§ The original handwritten papal privilege granted to the Giunti firm survives in the formerly ‘secret’ Vatican archives. The privilege states that as Blado had already sold most of his copies of Machiavelli’s books (i.e., his Discourses on Livy), and that the Giunti family also had the backing of Machiavelli’s heirs, then it was deemed only fair to extend printing rights to the Giunti. It is also worth mentioning that seldom were such privileges awarded freely out of apostolic benevolence. They were often very expensive but would be seen as investments by those who sought them — and the Giunti family were among the richest printers in Italy.

Actual page from the papal privilege granted in 1531 to the Giunti: 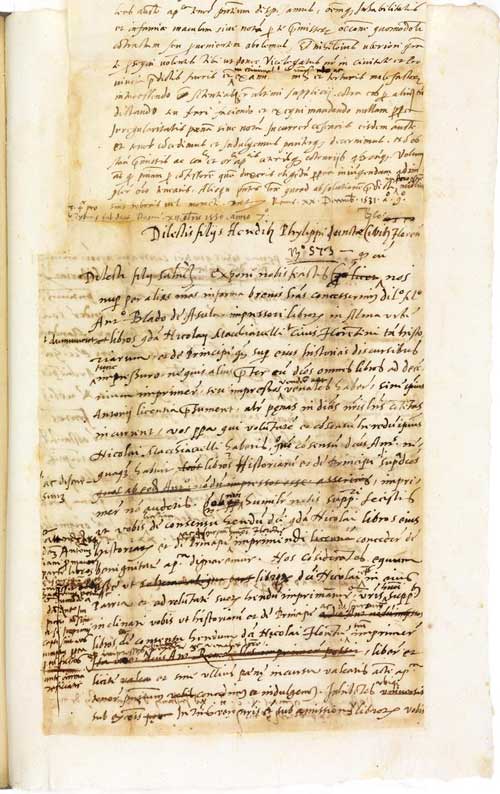 Giunti’s title page for the second edition of The Prince. Eight copies have survived. Photo courtesy of The National Library of France.

With the papal privilege in hand, the next and second edition of The Prince was published by the firm of Bernardo Giunti in Florence in May of the same year, 1523.

The above title-page for Bernardo Giunti’s Florentine edition of Machiavelli’s The Prince, bears the familiar Giunti fleur-de-lys supported by two cherubs, with the motto ‘Nil candidus’ (‘nothing fairer’) on the plinth. This edition, like the earlier Roman edition by Blado was published in one volume along with several other short pieces (The Prince is a relatively short work), including the biographical sketch, The Life of Castruccio Castracani.

The Giunti were shrewd and especially quick to pick up on new and potentially profitable trends. Bernardo’s father Filippo (1450–1517) had been quick to imitate or plagiarize the new small-format, italic-type Aldine editions for which Aldus appears to have successfully sued Filippo Giunti. And although the out and out forgeries ceased, Filippo continued to use italic typefaces. Perhaps the most notable feature of the Giunti italic used for typesetting the Florentine edition of The Prince is its oversized ampersand. Note too that the italic lowercase is paired with upright capitals, as were almost all italics until the late 1530s. (see Typographic Firsts, p. 52). 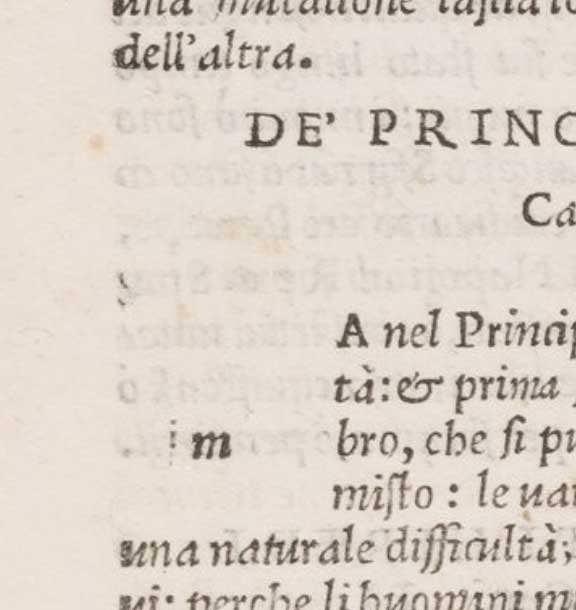 Above: a printed guide letter m in Bernardo Giunti’s May 1523 edition of The Prince.

Spaces are left for initials but, as was increasingly common in books of this period, those spaces were not filled with hand-painted or printed initials but left as they were — with the guide letter printed in the center of that little calm lake of white space serving well the purpose of pause and emphasis. The fashion is part taste, part economics: as the cost of books fell (significantly), then the relative cost of paying a rubricator or scribe to add in those initials by hand increased, to the extent, that for some books, the cost of adding in those hand-written elements exceeded the cost of the book itself.

A quick thumb through catalogues of sixteenth-century books reveals that Machiavelli was also published in Venice shortly after the papal privileges granted to Blado and Giunti. Were the Venetian printers also granted papal protections? Not at all! But then the Venetians lived in a world of their own and for them, the whole point of being a Republic was that no one could tell them what to do, so they simply ignored the papal privileges granted to Blado and Giunti, even issuing their own for local printers.

The Prince was not translated into English until the end of the sixteenth century. The first printed English edition appeared in 1640 in a very small (duodecimo) format, measuring just 14.5 x 8 cm and printed in London by Richard Bishop (fl. 1636–54). 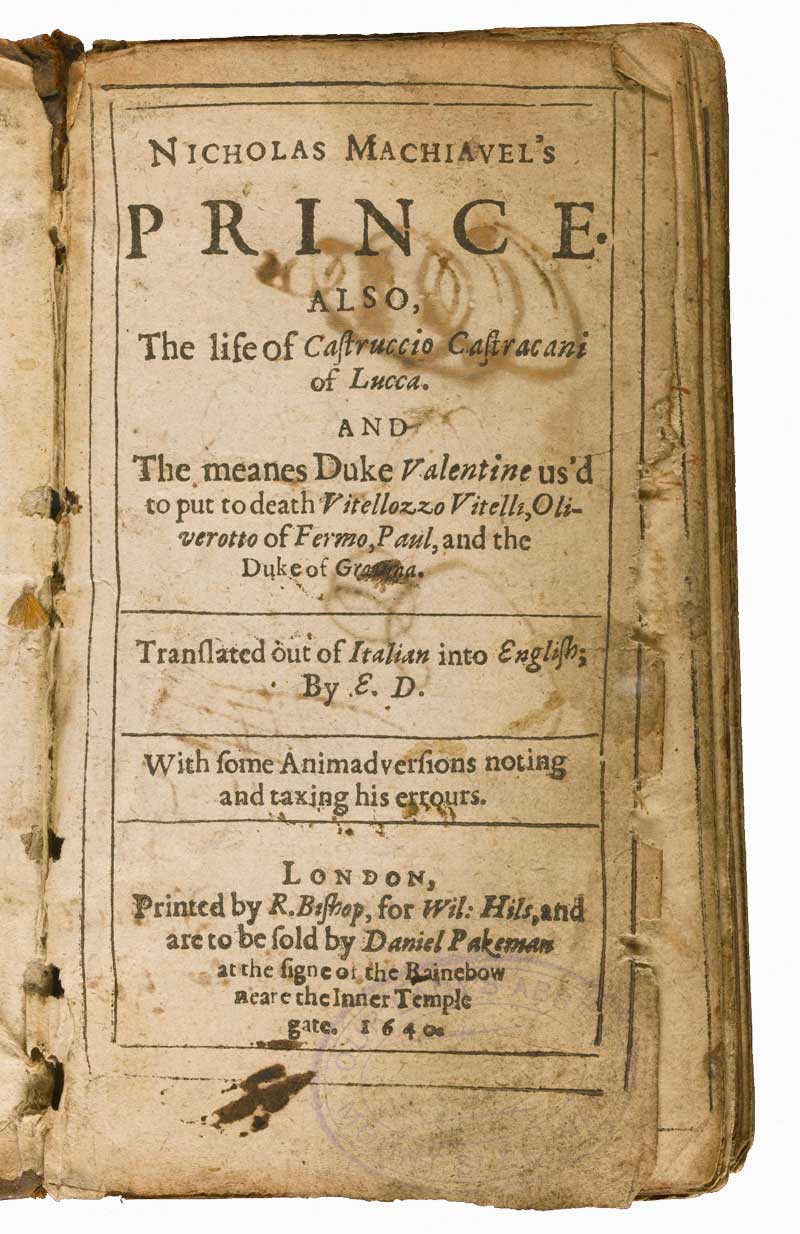 In Conclusion
Machiavelli’s ideal leader or prince might be ruthless, calculating and amoral but no more so than most Renaissance autocrats and wannabe tyrants, whether secular or ecclesiastical. Ultimately, The Prince is about the acquisition, maintenance and wielding of political power. If you wish to become a despotic autocrat who rides roughshod over ethics and truth, then it’s a fine play book. And if you don’t, then it is still an important book and worth reading for its insights into the minds of those who believe that the ends always justify the means — a notion still alarmingly prevalent in present-day politics.

If you’re interested in learning more about Machiavelli and his work, then for a good overview, see the Stanford Encyclopedia of Philosophy. If you don’t wish to read a biography of Machiavelli or to read The Prince from cover to cover (or listen to the audio book), then I suggest the BBC documentary.

Header image: Detail from Portrait of a Young Man by the artist-poet Bronzino, 1530s. Thanks to The Met.

To end on a lighter note: A number of quotes have been misattributed to Machiavelli’s The Prince but my favorite has to be, ‘Keep your friends close, and your enemies closer.’ Although Machiavelli covers the topic of friends and enemies, this quote is actually from the 1974 movie, The Godfather, Part II.