Love it or hate it, dread it or revel in it, suck at it or excel in it, math makes the world go round, sending rockets to the moon, forecasting the weather, describing the motions of the planets and everything else in the cosmos. Galileo (1564–1642) famously said that ‘the universe is written in mathematical language, without which it is humanly impossible to comprehend a single word.’ But today we are concerned not with the math of the astronomer or physicist but with the altogether simpler but equally important branch of mathematics, arithmetic. From the Greek words for number and art, arithmetic describes the traditional operations of or fundamental manipulation of numbers, including addition and subtraction, multiplication and division.

Anicius Manlius Severinus Boethius (c. 475–7 – c. 526) is best known for his Consolation of Philosophy, written while incarcerated as a political prisoner.

Throughout most of the Middle Ages, Boethius’ De arithmetica (‘On Arithmetic’) was, in Europe, the principal source for most math textbooks and remained so until the twelfth century, when the works of Arab mathematicians (via Spain) were translated into Latin by the likes of Robert of Chester, Gerard of Cremona and Adelard of Bath. These works and translations in conjunction with the rise of universities in the twelfth century gave a renewed impetus to the study of mathematics.

Although addition in Roman numerals is easy: stack or combine & then rearrange the numerals in descending order; e.g., XVI + VII =XVVIII or XXIII (Note: remember first to substitute for any subtractives; e.g. XIX is described as XVIIII). The Romans relied on the Roman abacus for arithmetic.

At about the same time, exposed to Arabic mathematics while studying in Bugia (in modern-day Algeria) and while accompanying his father on business trips to Egypt, Syria, Byzantium and Provence, Leonardo of Pisa (1170 – c. 1240), better known as Fibonacci, introduced aspects of Arabic math into Europe. Fibonacci’s Liber Abbaci (‘The Book of Calculation’), completed in 1202, was instrumental in popularizing Hindu–Arabic numerals. Imagine long division in Roman numerals!

Abbacus Book: the term derived from the ancient counting device, came to mean, in Renaissance Italy, ‘mathematical computation’ in general.

Mercantile Arithmetics
From the thirteenth century, a new kind of math book appeared – the commercial arithmetic or ‘Abbacus Book’ designed specifically for the education of merchants and tradespeople and usually written, not in academic Latin but in the vernacular. They arose in response to expanding international trade and banking and were used in the ‘abbacco schools’ that flourished from the fourteenth to the sixteenth centuries. They were filled with practical math problems related to the contemporary marketplace and for that reason reveal a great deal about Renaissance trade practices.

Math in Print
From the fourteenth century, it became increasingly common for German merchants and entrepreneurs to send their youth to Italy – typically Venice and its surroundings – to learn the mercantile arts, for which the Italians had a fine reputation. Therefore, it comes as no surprise that during the fifteenth century, Italy was to lead the way in the production of math books.

There are two other contenders for accolade of the first extant printed math book, but both are undated: a German-language text, perhaps printed as early as 1475; another, a 68-page Italian-language arithmetic titled Algorithmus, printed in Northern Italy (Reggio Emilia or Venice) about 1478. Remarkably, the contract for the printing of the Italian book has survived, revealing that 500 copies were to be printed – of which just two have survived (now in Vienna & Genova).

For the first printed math book, we must head to the plains of the Veneto, to the town of Treviso, just a little way north of Venice. The year is 1478, the printer is either Gerardus de Lisa or Michael Manzolus; the author, to this day is unknown but, from his introductory remarks, was evidently a math teacher in Treviso or thereabouts. The so-called ‘Treviso Arithmetic’, or Arte dell’ abbaco is the first printed and dated arithmetic and is filled with math problems for merchants, farmers, tailors, builders, and more besides. That it was a textbook aimed at students of commerce is evident in its use of the Venetian dialect. Merchants would seldom have been proficient enough in Latin to decipher such technical texts.

A curious typographic oddity is the frequent use of the letter i in place of the numeral 1. It appears that the printer simply had too few ‘ones’ in his type case and so substituted the scarcer 1 for the much more common i. However, as readers were already familiar with the lowercase i featuring in Roman numerals, no-one would have had any difficulty parsing them.

Common to all the early Abacco or arithmetics is the inclusion of countless practical, real-world problems and solutions for the math of commerce, including exercises for currency conversion, weights and measures, barter and investments. Many of the math problems in the Treviso Arithmetic read like latter-day brain-teasers. See if you can solve this one:

A carpenter has undertaken to build a house in 20 days. He takes on another man and says: ‘If we build the house together, we can accomplish the work in 8 days’ … How long would it take this other man to build it alone?

In the account book or Zornale of the Venetian bookseller Francesco de Madiis, for the year 1484, the Treviso Arithmetic is listed as sold for a price of 15 soldi, or the price of about three chickens, or three packets of sugar, and less than a day’s wage for a master builder (20-40 soldi).

After the Treviso Arithmetic of 1478, came the fifteenth-century’s best-selling arithmetic, a more comprehensive book by the Venetian mathematician Pietro Borghi. His Qui comenza la nobel opera de arithmetica, or simply Aritmetica mercantile ran to an incredible seventeen editions. The first was printed by the brilliant Erhard Ratdolt in Venice, in August 1484. At the time of its publication it is difficult to imagine any other printer being up to the task. It is an incredibly complex book to typeset.

The third notable arithmetic was Filippo Calandri’s Aritmetica. It was the first in print to include long division in the form we are now familiar with, superseding the galley method. It’s a rather unusual math textbook for its use of Italian-style woodcut borders in the classical style, populated with putti, vases and vine leaves – the kind of ornamentation usually reserved for classical works in Latin, rather than a math primer in Italian. 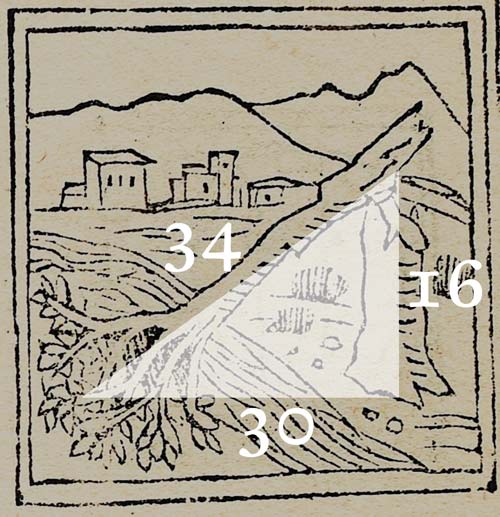 Printed in Florence by the Italian-German duo Lorenzo Morgiani and Johannes Petri, it is also the first arithmetic to accompany problems with pictorial illustrations. For example, the illustration of the felled tree in the bottom right of the spread, asks students to solve a problem requiring them to make use of the Pythagorean theorem [a2 + b2 = c2]. The problem asks at what height above the ground must a 50 braccia (unit of length/distance) tree be cut, so that its tip lands on the opposite bank at a distance of 30 braccia? Go!

In England, despite its early foray into vernacular printing, the first English-language arithmetic did not appear until the sixteenth century. The earliest surviving was printed in 1525 by Rychard Fakes in London. Fortuitously, the sole surviving page is its colophon which also reveals that it’s a translation of a French arithmetic.

These incredibly popular books continued to be printed in their tens of thousands well into the sixteenth century. And we have not mentioned other kinds of math books, like those of Regiomontanus (brilliant mathematician, astronomer & printer!) in Nuremberg, or the first printed edition of Euclid’s Elements, published in Venice in 1482 (again by Ratdolt) and Luca Pacioli’s 615-page Summa de arithmetica, geometria…, first printed in Venice by Paganinus de Paganinis in November 1494 – that was instrumental in promoting the use of the double-entry accounting system.

The printing revolution sent these hand-printed math texts to all four corners of the earth, confounding and inspiring hundreds of generations, igniting scientific revolution and launching our very modern world.

next: In the Shadow of Notre Dame