Humans have written about war and warfare since writing was invented. One of the best known from antiquity is Flavius Vegetius’ late fourth-century, De re militari or ‘Military Science’, repopularized throughout the latter Middle Ages and first printed in c. 1473–74 by Nicolaus Ketelaer and Gerardus de Leempt in Utrecht in the central Netherlands. This edition is entirely without illustrations. It was first published in English translation, in print, by William Caxton in 1489. But despite its early resurgence in print, the sixteenth century saw it replaced by more up-to-date treatises, like, for example, Machiavelli’s The Art of War, first published in Florence in 1521. Machiavelli felt that Italy had, militarily, fallen behind many of its European neighbors. This led him to look back at Graeco-Roman antiquity for models on the proper conduct of war. His work is especially indebted to that of Polybius (c. 203–120 BC), who in his The Histories described the political and military institutions that had made the Romans so successful. 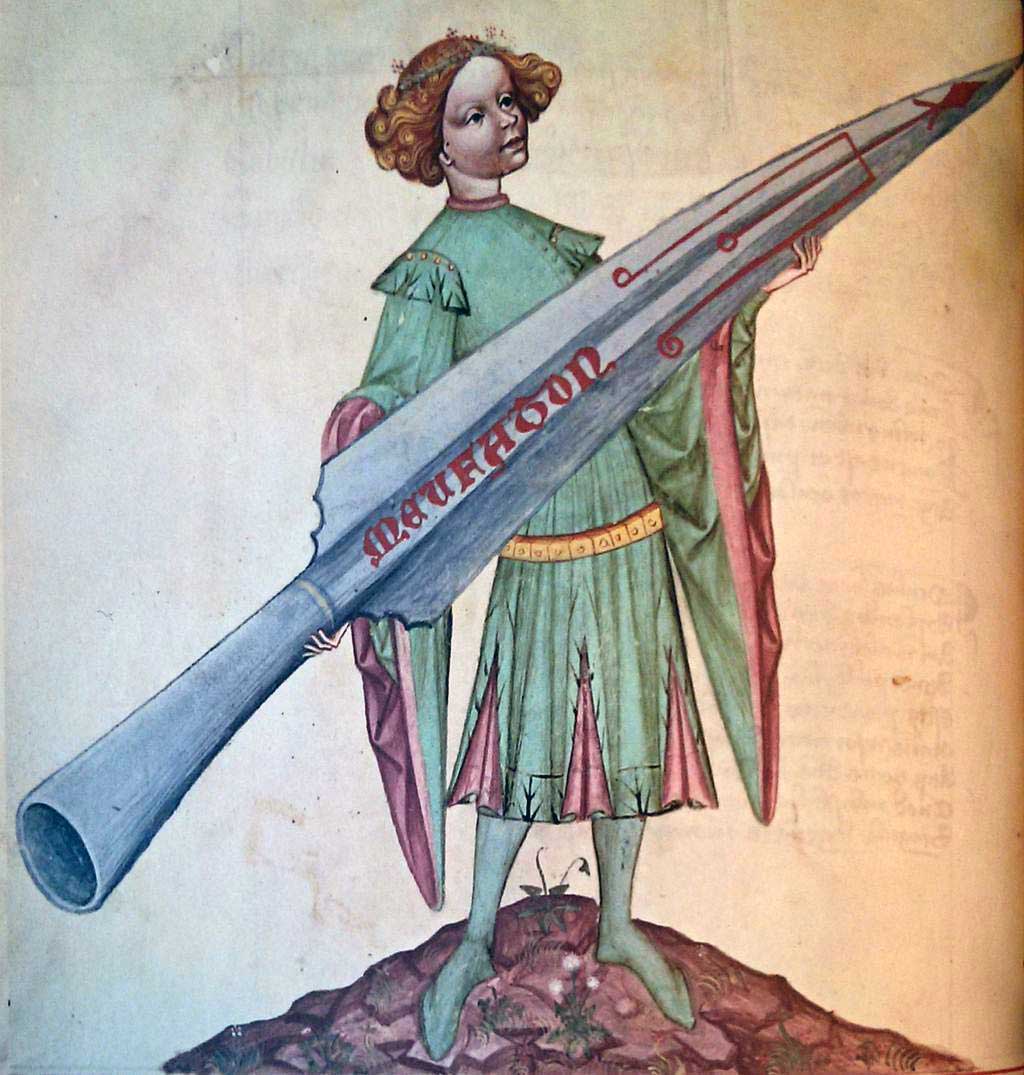 Woodcut from Kyeser’s Bellifortis, 1405, depicting Alexander the Great holding, not a large pen, but a rocket. Kyeser was obsessed with the legends of Alexander, going so far as to suggest that he possessed magical powers.

Of all the medieval manuals of warfare, Conrad Kyeser’s Bellifortis (‘Strong in War’, 1405) is undoubtedly the best known, even to modern audiences who might be familiar with Bellifortis’s illustration of Alexander the Great holding a rocket. Oddly enough Bellifortis’s manual was not printed until the twentieth century! Kyeser traveled widely, spent time at the Paduan court, later joining a crusade against the Turks that ended in disaster at the battle of Nicopolis in 1396 – a defeat that undoubtedly motivated him to write Bellifortis, in which he describes military tactics, troop discipline, the use of magic and astrology, instruments of torture, and numerous weapons and war machines that predate those of Leonardo da Vinci by the best part of a century.

Although a number of Kyeser’s contraptions are rather novel, his designs for bizarre female and male chastity devices and an awful instrument of torture for excruciatingly painful and protracted castration reveals his sadistic nature. As Lynn White writes, “the fourteenth and fifteenth centuries were the most psychologically deranged in European history, and Kyeser was entirely a man of his age.” (p. 439)

The very first book printed on the topic – indeed the first book on technology to be printed – was published in 1472 as De re militari (and not to be confused with Vegetius’ work of the same title), authored by the fifteenth-century humanist Roberto Valturio and printed by Johannes de Verona, Verona’s first printer. Valturio was a military engineer to Sigismondo Malatesta (1417–1468), Lord of Rimini in northern Italy. Like many brilliant men of the time, well educated and even an enthusiastic patron of the arts, he was also a monster. Among his most vocal critics was Pope Pius II who accused Sigismondo of rape, incest and the murder of his first two wives by poisoning and strangulation. On a typographic note, the small, fairly round and delicate roman type is rather uneven in its setting – not at all uncommon in early types and attributable more to defective casting than typesetting.

The text is accompanied by more than 100 woodcuts, illustrating everything from sometimes bizarre Heath Robinson-esque contraptions to modifications of earlier medieval technologies and dozens of siege machines and other weapons of war, including a scythe-wheeled combat wagon, ferrying an elite strike force armed with, among other weapons, a crossbow and a handheld gunpowder canon

The very last woodcut in the series depicts a soldier in a full suit of armor, breathing through a pipe attached to a girdle filled with inflated goat skins — to permit swimming under water! I would not have volunteered to test this one.

Related article: The Prince and the Fleur-de-lys

next: Who Invented the Index?