Welcome to this month’s roundup of type-related info and entertainment. Today, we dip our toes into some controversial typographic decision making over at Apple; we talk about typography as a societal problem solver (or not); we discuss the evolution of emoji and the invention of the octothorpe; we show you type made out of hands, arms, buildings, lakes, and rivers; we check out Norway’s new passports; we look at Medieval ASCII art; and much more. 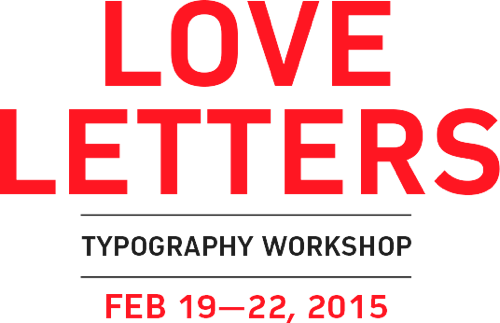 Twice a year, creatives from all over the world gather at The Hotel am Brillantengrund, in the heart of Vienna, and participate in workshop-based masterclasses. This year’s workshop will split a real love letter into small parts, on which each participant will work some typographic magic, supervised by tutors. The end result will be composed into a limited edition book. Sounds like a great way to spend mid-February! 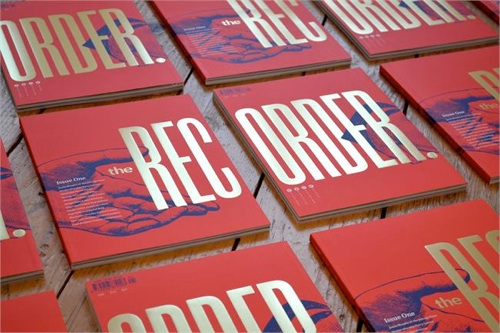 The original Monotype magazine, The Recorder, has been relaunched, with a complete redesign by Luke Tonge. The magazine first appeared in 1902, and is now a limited-run biannual focusing on typography and its place in culture.

How did we miss this? A line of watches inspired by and using Helvetica. Apparently too much Helvetica is never enough! Actually this makes a lot of sense — a great deal of constructive genius has gone into Helvetica; why not apply it to a different sort of construction?

Will Google Fonts Ever Be Shut Down?

A interesting essay on the possibility of Google Fonts winding up in the Google Graveyard someday. Why is Google in the font business? And what would happen if our reliance on their service were upended?

Every so often, someone comes along who claims that typography can solve some huge societal problem. Recently, there was quite a storm kicked up by a precocious middle-schooler who claimed that the US government could save hundreds of millions of dollars a year simply by switching from Times New Roman to Garamond. Similarly, several years ago, there was a great deal of buzz about the hole-filled, toner-saving econfont. Most recently, a font was released that its creator claims can help dyslexics read faster and with better comprehension. In this article, Chuck Bigelow shares an impressive amount of research which helps dissect the idea that this font can ameliorate dyslexia.

A short talk on the current state of webfonts, by editor and typographer Stephen Coles. If you use webfonts (or are thinking about using webfonts) you’ll want to watch this 30 minute introduction to the topic. 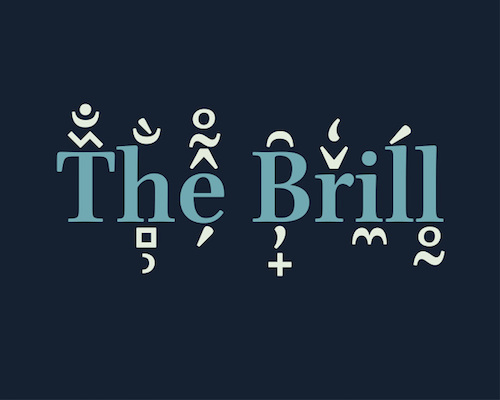 Alice Savoie’s foundry, Frenchtype, is online with a brand new portfolio website. Check out some of our favorites, Capucine, The Brill, and Bogartes.

International foundry Typofonderie — makers of Le Monde Livre and Ambroise — is now selling its collection of printed type specimens. (They generally send these to their clients along with their font purchase.) This set of specimens include Angie Sans, Anisette, Apolline, Ardoise, Geneo, and Mislab, along with Typofonderie stickers and a few others goodies. 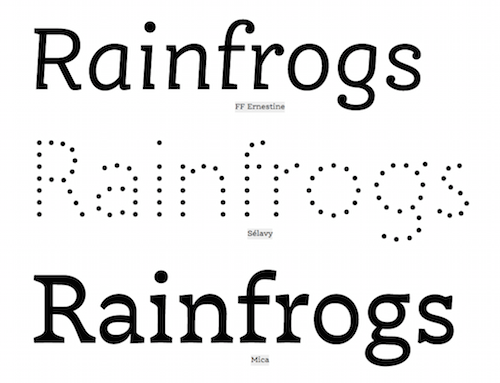 Typologic is a small studio for type design and typography run by Nina Stössinger. Check out her new website, filled with typefaces, typography, and tools. 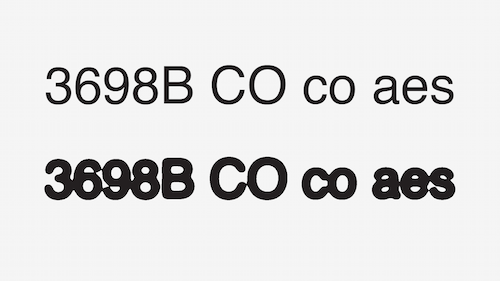 A good piece on legibility in typography and type design, including research on controversial issues like whether or not serifs increase legibility, and the role of x-height in legible reading. Check out the Gaussian blur test — very interesting.

In case you haven’t already heard, buried in the new developer tools for Apple’s smart watch is a new font called San Francisco. Apple’s developer notes say: “The system font was designed specifically for legibility on Apple Watch. At large sizes, the font’s slightly condensed letters are set tight to take up less horizontal space. But at small sizes, they are spaced more loosely and have bigger apertures in glyphs like ‘a’ and ‘e’ to make these easier to read at a glance.” 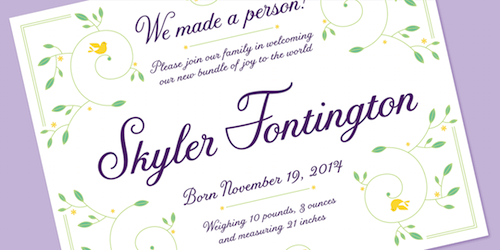 A beautiful microsite for Jessica Hische’s beautiful typeface, Tilda. The typeface was developed for the Wes Anderson movie Moonrise Kingdom, and is now available for your use from Font Bureau.

The Evolution of Emoji

Oh, those smiley faces. Annoying, ridiculous, but ubiquitous, and seemingly here to stay. Unicode already has 722 emoji symbols encoded into it, and recently announced that another 250 will be officially added, including Reversed Hand With Middle Finger Extended. I can’t wait for the emails to start rolling in with those emoji embedded. Check out this New York Magazine article on the history and current state of emoji. A very interesting read.

This is only marginally about typography, but we love when bureaucracies let graphic designers update the look of traditional government documents. Great work from Neue Design Studio. Check out the cool UV light feature.

If you’re a fan of topography and typography, this will make your day. The folks behind Aerial Bold are planning to scour satellite imagery of the Earth, in order to find letterforms made out of buildings, roads, lakes, and other natural and man-made features. The images will be made available, and a selection of them will be made into an actual font. The project was recent successfully funded at Kickstarter, so keep your eyes peeled for progress.

Courier and the Massachusetts Court System 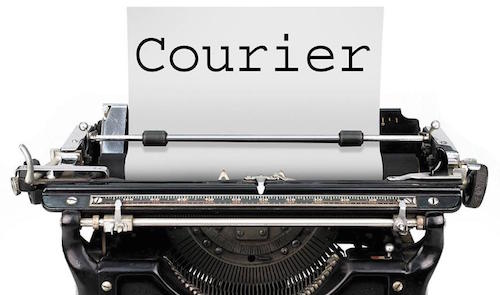 The Boston Globe writes here about the State of Massachusetts steadfastly clinging to the use of the monospaced font Courier in all of their official documents. There are reasons beyond the inertia of bureaucracy — for instance, in the early days of computers and their proportional fonts, cagy lawyers started submitting non-monospaced briefs to the court, where 50 pages would actually hold the equivalent of 70 pages of monospaced text. In 1999, Massachusetts formally restricted legal briefs so that they can only use Courier, and the regulation stands today. 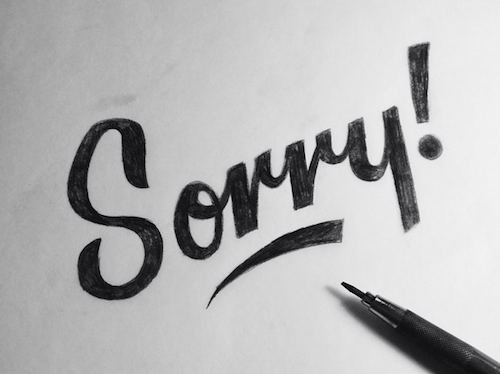 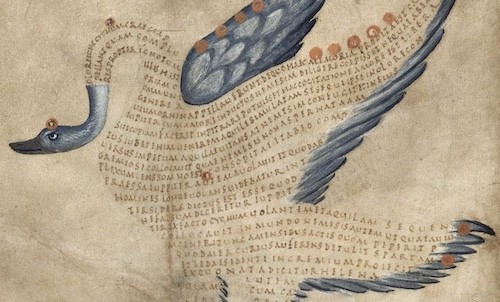 Books weren’t so different in Medieval times — tracts of text were composed along with accompanying illustrations into an aesthetically pleasing whole. But our Medieval counterparts were also wonderful design experimenters, and essentially invented ASCII art, well before ASCII. They created art out of words. Read this article for a glimpse into this Medieval practice.

Misha Beletsky — Art Director of Abbeville Press, a publisher of fine illustrated books in New York — talks about the old foundation and the new influences in art book design, using his own work as an example. The talk was given at the Society of Printers, in Boston.

A Quick History of the Octothorpe (#)

A very animated Hank Green describes the history of the octothorpe, and how it became known as the “pound sign”. 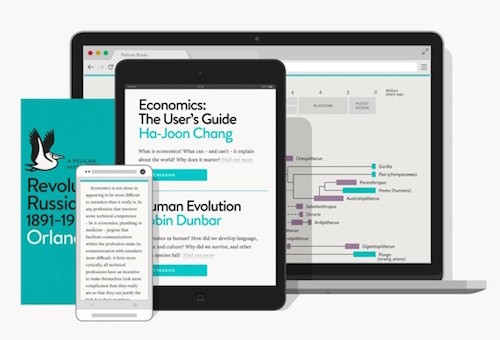 Creative Review reviews the recently launched corpus of Pelican Books’ ebooks. Pelican standardized their fonts across their library, using Freight Text for body copy and a custom version of Brandon for headlines; they created adaptive cover art that scales well at any size, and recurs thematically throughout the text; and all of the books’ illustrations have been redrawn with special attention to clarity via screen viewing. Lovely work.

You know, in case you’ve been worrying about your lack of Erik Spiekermann knowledge lately. 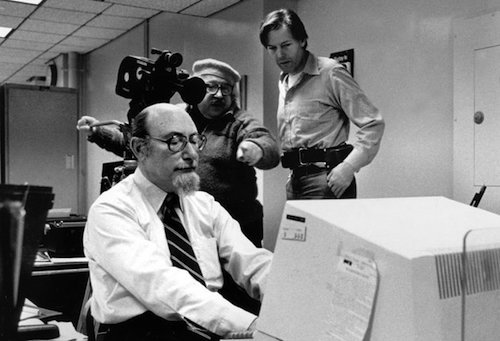 Carl Schlesinger, a typesetter at The New York Times, is perhaps best known for his role in an award-winning documentary about the last issue of the newspaper that was made using hot-metal type. Schlesinger helped The Times transition from using Linotype, a hot-metal printing technique invented in the 1880s, to cold type, generated by computers.

Type Made with Hands (and Arms) 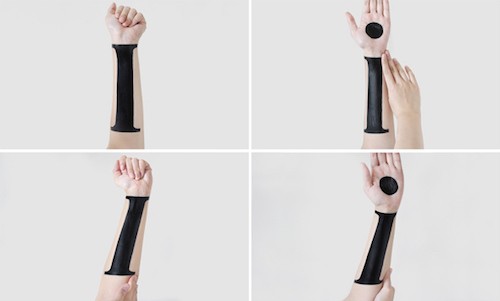 A kinesthetic typographic experiment about transforming uppercase glyphs to lowercase. Take a look at the images and video — a picture is definitely worth a thousand words, in this case.

Craig Mod on the Unnoticed Aspects of Good Design 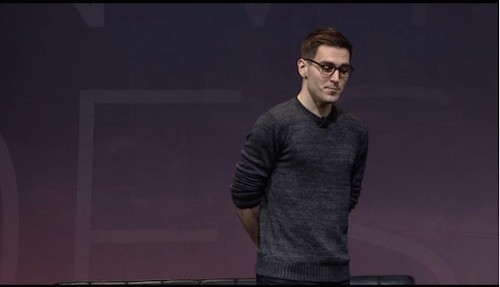 In a recent talk at Gigaom’s RoadMap conference in San Francisco, designer and writer Craig Mod discussed the beauty that lives in the margins of typographic and other design pieces. Scroll down to the bottom of the article for a video of the talk.

Nicole Dotin, co-founder and partner of Process Type Foundry, talks about all things type. Our favorite quote: “This is a strange idea, to single out only beauty to judge a typeface. Typefaces are tools, and a beautiful axe that can’t cut down a tree is worthless. ”

Typeblocks: Play with Your Type 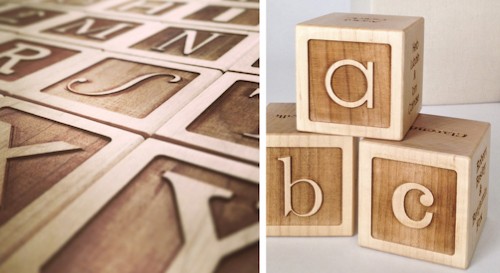 Two-inch maple blocks for your child (inner or real). Each block presents a different typeface whose name begins with the letter of that block (ex. “A” is for Avant Garde) and includes a large upper and lowercase specimen, typeface name, designer(s), date, and classification.

What’s the Difference between Lucida Grande and Helvetica Neue?

In case you missed the brouhaha over Apple’s decision to start using Helvetica Neue instead of Lucida Grande as its system font in OSX, we bring you this in-depth article on the differences between the two. Now you can add even more informed opinions to the loud debate over which font is better.

How Morisawa Japanese Fonts are Created 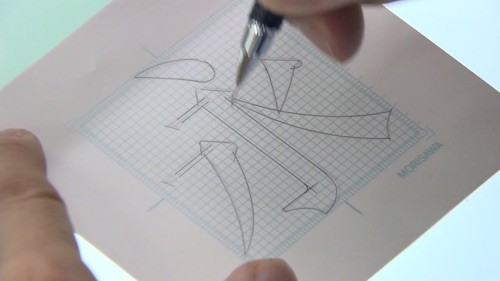 Wow — we thought that creating Latin fonts was difficult! Check out this video on the creation of Japanese fonts by the folks at Morisawa. Fascinating. And incredible how much work goes into the process.

For those of you who like playing with pens, here’s a nifty set of calligraphy exercises that guide you through experiments in blackletter letterforms. There’s a helpful video at the end, too. 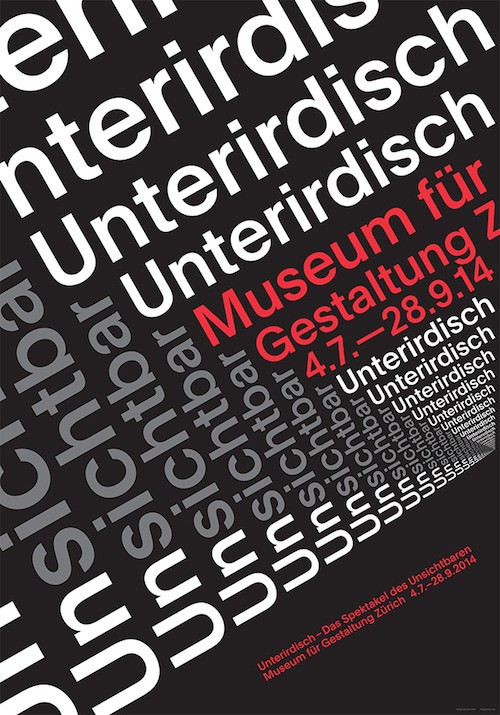 In 1998, Rust co-founded the online type foundry Optimo. Shortly thereafter, as a principal of the Gavillet & Rust studio, Rust helped create the visual identity and communication for prominent institutions in the art world in Switzerland and (Art Basel, Museum für Gestaltung in Zurich, Kunsthalle in Berne) and beyond (Guggenheim Museum in New York).

previous: Notes on the first Italic

next: The first Bible set in roman type