In the 1980s, the German Democratic Republic’s state television broadcasting service commissioned Axel Bertram to develop a custom typeface. The result was “Videtur,” a remarkably independent serif design that was intended to define the on-screen graphics of East German television for years to come. But by the beginning of the 1990s, the GDR no longer existed. With it went its state broadcasting service – and Videtur, too. Another 20 years in the now reunified Germany would have to pass by before Andreas Frohloff could finally help bring a modernized FF Videtur to market.

Whenever a particularly unique type design challenge arose in the eastern half of divided Germany, it wasn’t long before eyes began to fall on Axel Bertram. Already when it had come to the design of magazines and book covers, he had refused to be satisfied with the limited range of typefaces available in the socialist state. Unlike many of his colleagues, who simply copied western models, he drew new type and lettering commissions according to his own ideas:

“The typefaces that came from the west were often photographed; then their letters would be rearranged. I always drew everything myself, however. The results looked more original that way. All that practice made my letter-drawing skills better.”

The requirements for Videtur were very specific. In order to meet the medium’s needs, Axel Bertram initiated a broad series of experiments with the 625-line television screen’s display conditions. He summarizes his findings into three points:

1. Serif letterforms are easier to recognize than those in monolinear sans serif typefaces.
2. Compact serifs stabilize letterforms and improve the reading movement along a line of text.
3.An alternating stroke contrast leads to easier differentiation between letters.

During Videtur’s design phase, all three findings were kept in mind and refined with the most advanced technology available at the time. After the typeface had been precisely drawn in four different sizes, it was photographed with an electronic camera and projected onto the screen.

“The letters’ height was adapted to the number of lines on the television screen and were justified pixel by pixel with the Chyron font generator. The point size was practically determined by the number of lines available. I experimented with the serif-forms a lot; the result was something that I named the ‘balled knot’ at the time.”

Aside from electronic display technology, text for television graphics in the 1980s was often set with rub-down letters. In East Germany, these sheets were produced a by company named Typofix. Both of these typesetting methods (electronic on-screen typesetting and rub-down letters) were technologies that – at least in his GDR days – Axel Bertram only had access to during his work on the Videtur project.

Oldstyle-inspired letterforms, short ascenders and descenders, low stroke contrast and the “balled knots” form the basis of this extraordinary typeface’s design. In order to transfer these characteristics into the new millennium in a contemporary way, it was necessary for Axel Bertram to find a competent helping hand; someone with a particular attention to detail. He found the man he was looking for in Andreas Frohloff, a former student and now Head of the Type Department at FontFont. Or rather, Frohloff found him. Frohloff proved to be the impetus for redesigning Videtur in the first place, as Bertram had long considered a Videtur-revival to be out of the question. Frohloff managed to change Bertram’s mind through something of a “pirate” method:

“I told him that I’d really like to have an image of the old Videtur typeface. After he found one for me, I scanned it in and made a pretty raw digital version of my own. I changed the proportions a little bit, too. My results managed to convince him, and our collaboration really took off.”

It was clear to both of them that, in the age of HD-TV and retina displays, Videtur couldn’t be re-digitized as is. Even the old serif-form would appear quaint in a high-resolution environment. The “balled knots” were gently and prudently modeled into a triangular form – more pointy, but still rounded. Adjustments were also made to the vertical proportions; shorter ascenders and descenders were adequate for old television graphics, but needed to be extended a bit for optimal comfort in today’s reading conditions. Of course, the two designers also revised the basic shapes of the letters – when returning to a typeface after such a long time, it is only natural to take advantage of the opportunity to incorporate lessons learned. More subtleties are possible today, as Andreas Frohloff explains with the example of one detail:

“We tempered the rather oblique diagonal stroke on the lowercase ‘e.’ In the original Videtur, the diagonal was so extreme because its angle could minimize flickering on the screens of the time – the so-called ‘St. Elmo’s fire’ on corners and edges appeared less frequently this way. Now the bar appears softer, and it fits into a contemporary text typeface better.”

Although the letters were revised, particular attention was paid to keep the stroke contrast moderate but still noticeable – less than is usual in humanist typefaces – in order to retain the design’s original vigor.

Because of its television screen background, FF Videtur remains a technical typeface, but it does have recognizable humanist features in its blood. This isn’t surprising, as both of the typeface’s creators are calligraphers. Already in the design for an earlier custom typeface for the high-circulation weekly magazine NBI-Wochenzeitschrift (Neue Berliner Illustrierte, 1963), the influence of Eric Gill and Edward Johnston on Axel Bertram is quite recognizable. After so many years, his opinion on the humanist letterform remains unchanged:

“The highest development for typefaces, in terms of legibility, was reached during the Renaissance. It doesn’t get any better than that!”

In comparison with the typefaces from the last decade, FF Videtur stands out. Similarities are more likely to be found in printing types from the 1980s, such as Karl-Heinz Lange’s Minima, or ITC Weidemann, whose similarity stunned Axel Bertram’s former student Andreas Frohloff:

“We were talking about Videtur one day while I was in design school, and I happened to have an issue of Graphics magazine with me. ITC Weidemann was presented in that issue; although at the time, the typeface was still called ‘Biblica.’ I couldn’t believe the resemblance at first, but a closer inspection allowed us to breathe easy again. This was one of those famous coincidences: a similar task – good legibility, little space available – and at that time, one apparently had similar conceptions of design.”

At the same time, Videtur’s humanist approach also managed to help distinguish GDR-TV from competing West German television channels. During the 1980s, on-screen graphics from ‘that other side of the Wall’ were more often set with neoclassical-style typefaces.

Thanks to its 21st century revision, FF Videtur isn’t limited to the television screen or to just four point sizes. Numerous tests prove that it easily fits into any media. Today, FontFont typefaces are used in more environments than ever before – in print, on websites, with mobile devices, etc. – and Axel Bertram is thrilled to see how designers will use his modernized typeface:

“I work with the fonts myself. I love writing with them, and I’ve tried the typeface out in my own correspondence. The design is objective and has an attitude.”

Andreas Frohloff especially appreciates FF Videtur’s warmth: “Its objectivity, combined with its rather warm humanist forms, gives the typeface an impressive range of possibilities. I’m not surprised that it works well on-screen. It has a static quality that combines well with the dynamic of the moving image, even under adverse conditions.” 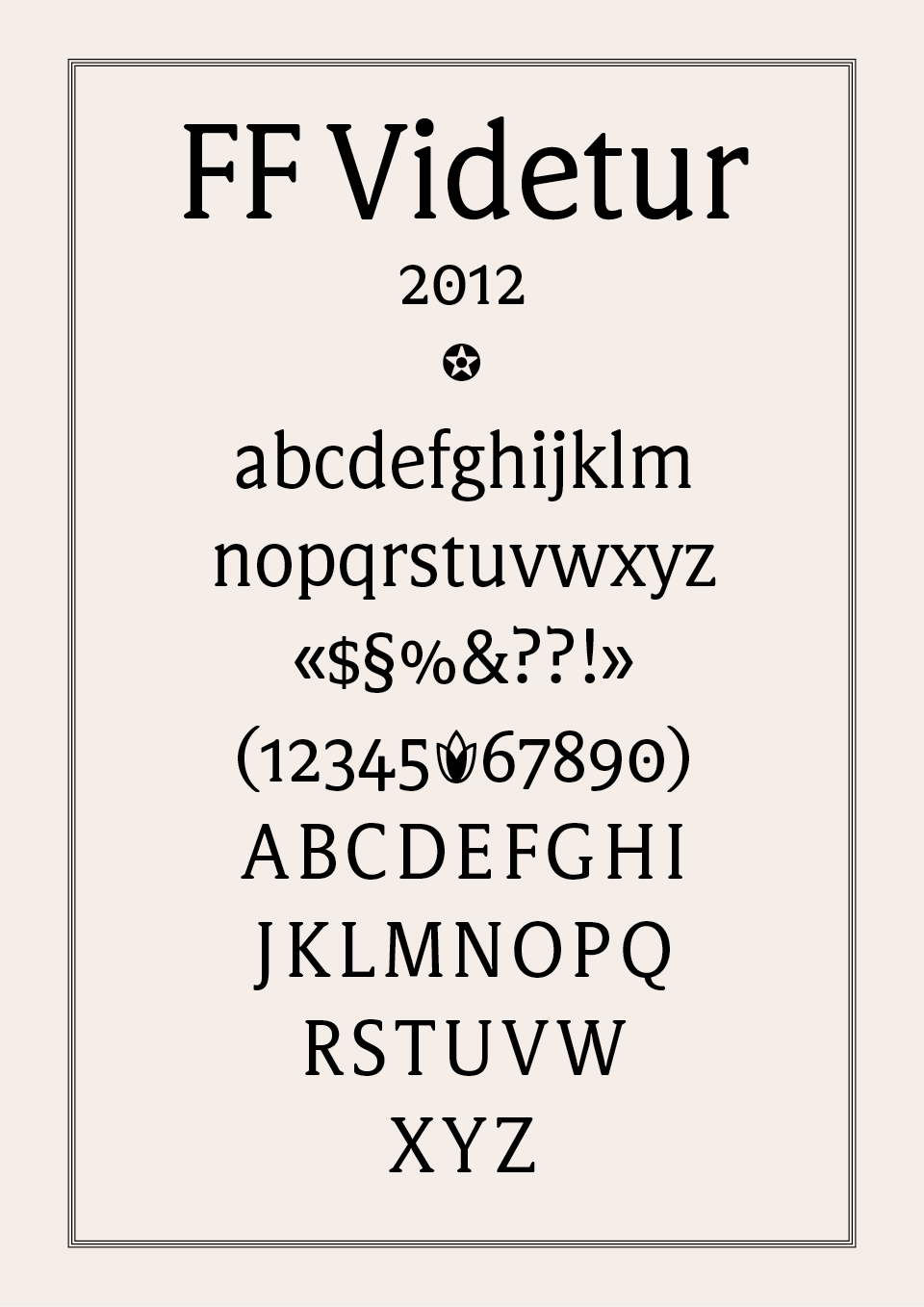 FF Videtur is already the second collaboration between these two type designers. Rabenau, their neoclassical serif family, also had a long development process before it was finally published by Linotype in 2011. Axel Bertram and Andreas Frohloff each work with precision and share a common attention to detail, as Frohloff emphasizes:

“It’s nice when two designers can work on the same wavelength. I studied under Axel Bertram, but I don’t feel occupied by his opinions. In between our frequent meetings, we often came to similar conclusions in our work. Afterwards, we could constructively continue down the same path.”

With the release of FF Videtur, their cooperation hasn’t reached its end. Each of them has ideas as to how the never-before-designed italic for FF Videtur could look. While Axel Bertram isn’t even sure if an italic is necessary, Andreas Frohloff already has a vague concept for the extension:

“If it comes to that, the italic should have a dynamic form that would combine with the very objective-natured upright members of the family. I think that the contrast between these two styles would be charming.”

We’re sure he’ll find the right way to convince Axel Bertram this time, too!

next: Making waves with Magasin