Welcome to another ‘week’ in type. So much is happening, I can barely keep up. If you haven’t already read it, then head on over to Typographica for their brilliant list of 50 favorite typeface releases of 2011. A great list and some fine reviews. Really like Typographica’s use of FF Quadraat. I am working on my own list of ten typefaces, to be published within the next two weeks.

I was interviewed for the fourth issue of Eight Faces magazine. Also interviewed are Craig Mod, Kris Sowersby, Doug Wilson, Nadine Chahine, David Březina, Silas Dilworth, and Nelil Summerour. I like Craig’s description of one of his eight faces, Feijoa:

Like a brusque, curvy madame at the entrance of a whore house, with parents born to nobility.

The printed version is sold out, but you can buy the PDF.

A wonderful interview with the brilliant Ken Barber:

Oded Ezer is interviewed on TypeRadio. 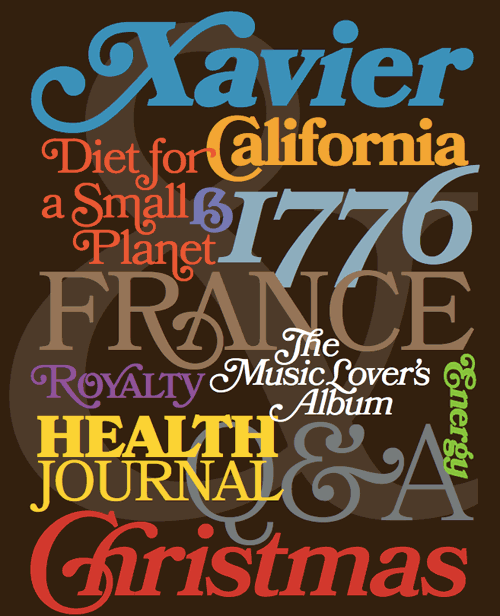 Be sure to check out Mark’s blog too. He’s been posting at warp speed of late.

50% off Dunwich Type’s Armitage and Sybarite before February 24 ▼

The latest addition to my own type library is Revis. Based on Daphne by Georg Salden. Coen Hofmann resurrects this gorgeous hard-cornered, bold, italic-like script beautifully ▼

A brand new, fifth edition of Meggs’ History of Graphic Design in print, on the iPad, and iPhone. A must-read for all graphic designers. Read more about it on The Atlantic; buy the print version, or head on over to the app store for the iOS version. This is not a digital version of the book, but a flashcard app for reference & study. The app is pretty ugly and useless. The book is required reading.

And mark March in your calendars for the publication of Stephen Banham’s Characters. In the meantime, read Paul Shaw’s excellent review.

Chatype, a typeface for Chattanooga:

Be sure to check out TypeToken:

Really like the use of Process Type’s Stratum on The Great Discontent. See it in the pull-quotes.

You can buy the web fonts from Process Type’s site, then choose to host the files yourself, or have TypeKit do it for you.

How do you woo Jessica Hische? That’s what the folk at the Society of Design in Pennsylvania asked themselves.

My first reaction was that’s not bad. Not such a big deal to have a pile of license plates printed; but then I read on to discover that they actually convinced drivers to register these license plates with the DMV.

And, yes, Jessica Hische will be going to Pennsylvania. If you’d like to invite me to your event, then hold off the license plates — a pair of socks or a book token will do.

Some interesting experiments in 3D type between Ravensbourne and Johnson Banks with 3D type. I wonder what Baskerville and Bodoni would think of this:

Upside Down, Left To Right: A Letterpress Film by Danny Cooke:

When it comes to setting em dashes, some claim that they must always sit between thin spaces (U+2009). Of course, all hard and fast rules should be taken with a pinch of salt. And here’s why: not all em-dashes are equal. In most fonts the em-dash already incorporates a little extra space on either side (e.g. Helvetica & Georgia); others (e.g. FF Scala) have no space (no side-bearings); while others (e.g. Dante MT) are actually wider than their advanced width.

Proof that a single rule or solution is no solution at all. As with so much in typesetting, let your educated eye determine what’s best.

If you’re not sure how much space comes with your em-dash (or other dashes for that matter), then type it into a text editor, make it big, then select the dash to reveal the size of its side-bearings, as in the figure below:

Morisawa [Japanese only] foundry in Japan will launch its webfonts service on February 22. Why so long in coming? Well, the size of the font files is a major consideration. While a Latin font contains hundreds of glyphs; Japanese fonts require thousands. Morisawa will address this by offering sub-setting on the fly. I’m not sure that this is the best solution, though I don’t have a better one.

Also, don’t forget to check out the superb weekly type news from Typedia. Erik Vorhes and Grant Hutchinson are doing a fantastic job.

The Codex team is hard at work on issue #2. Aim to publish in June. Very excited about this second issue. you’ll most definitely want to read it. Although the print version of issue #1 sold out some time ago, the PDF version is still available.

Free shipping on the beautiful, screen-printed World Without Type poster, until Feb 14. Just enter the code ILT at checkout. Shipping to anywhere in the world (except North Korea and a few other places, I believe.)

Well, that’s it for this edition of the week in type. If you have an item you’d like to submit, then simply email johno@ this domain .com

Have a great weekend.