More than half a millennium has passed since the invention of moveable type in Europe. It’s now just about impossible to imagine a world without it. That very sentiment is set in ink in this new print collaboration with Stefan Hattenbach. A sumptuous screen-print of gold, white, and black inks on beautiful red Plike paper. A truly stunning print, and perhaps the perfect Christmas gift! 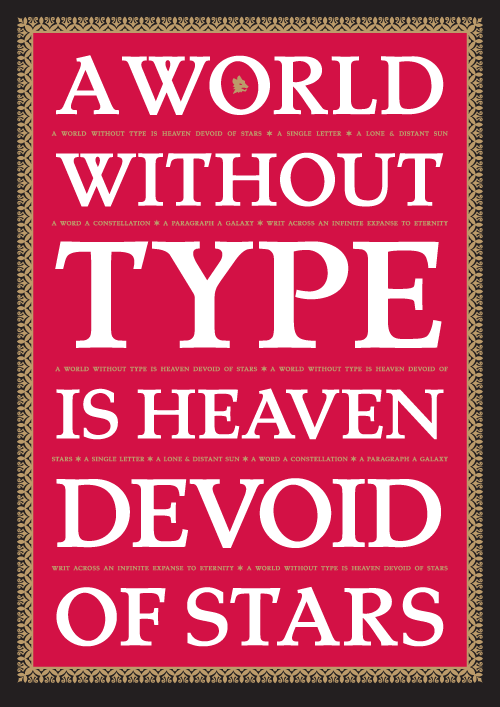 It’s been a while (too long) since the last Week in Type, so without further ado:

Let’s begin with a smile and this great tee from Able Parris:

A lovely short of Robert Warner dancing with his Golding Jobber press:

Another video. This one a delightful spelling video, and some unusual materials for letterforms:

Practice your kerning (or, more accurately, letter spacing) with KernType. 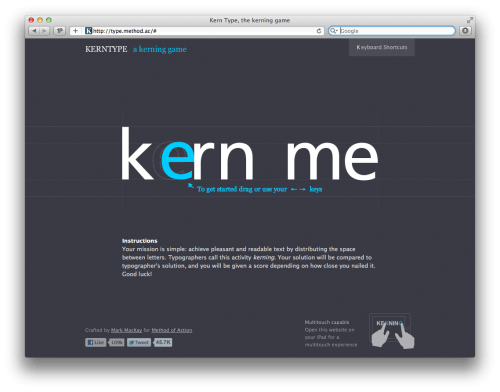 All you need is a large chainsaw and an even larger piece of ice. Promo video from Monotype for Kobayashi’s Akko:

A little baffled by Google’s foray into Kickstarter projects. Why would one of the richest companies in the world seek crowd-funding for its fonts. The quality of many of the fonts in their library is pretty poor. Perhaps they should stick to investing in technologies for improving screen fonts, rather than publishing more sub-standard fonts in a market that is already bursting at the seams with crap free fonts. See Stephen Coles’ no-holds-barred Roboto is a Four-headed Frankenfont, where he describes Roboto as an “unwieldy mishmash.”

It’s merger/buyout time: First Adobe buys Typekit. Though Adobe fails and fails again when it comes to software, when it comes to fonts, they’ve done well. If they keep the present Typekit team — and they’ve announced that they will — then it’s a really great move.

Then Monotype (Linotype, ITC, et al.) bought Bitstream (MyFonts). Looks like a good deal for Monotype. Not sure what it will mean for customers. Perhaps this is a good time for new players (distributors/resellers) to enter the market?

Type Can, where Type Campers talk about their experience of Dr. Shelley Gruendler’s wonderful Type Camps. New Zealand plays host to the next one in January.

In case you missed it, FontFont has a page devoted to free fonts, including FF Nuvo Web Medium.

Great to see the Ludlow Projectt has reached its funding goal. Still time to add your support:

I gave up trying to find a segue from leg hair to Matthew Carter, so:

Highlights from Paul Shaw’s interview with Matthew Carter for the TDC. A must-see:

How to enable more languages in InDesign CS5.5
FontLab Studio 5.1 released at last. Now compatible with Lion.
What Should I Look For In a UI Typeface? (comments are more valuable than the article).
The trouble with font classifications
Putting the ‘Fonts’ into Webfonts
Seminario de Profundización y actualización profesional en Tipografía
Interactive Typography Effects with HTML5
James Mosley on the Elzevir letter
My Type of Music
The Typography Out Approach
Video interview with Oded Ezer

Still controversial, but if you are in the yes camp, here’s how Ralph Hermann thinks the capital Eszett should be drawn:

Cassia, the soft and friendly ‘Egyptienne’ from Dieter Hofrichter, and available from MyFonts:

A display type that’s as fat as they come. Meet Daisy from Ludwig Übele:

Erler Dingbats is free to download and use for both private and commercial use. The core glyphs are from FF Dingbats. You can read more about it on the FontShop blog, the FontFeed; and download it here.

Importantly, it’s Unicode friendly, mapping to Unicode address U + 2700 through U + 27BF, so you can use it on websites and embed it in apps.

There are a handful of Codex magazine still available. Or you can buy the PDF version of Codex.

Have a fantastic weekend.

next: An Interview with Verena Gerlach