the week in type

Perhaps you thought ‘The Week in Type’ was dead. Well, this post marks its resurrection. It won’t be weekly just yet, but from 2011 it will be: a weekly roundup of new releases, type and lettering to inspire, type tips, videos, and lots, lots more. If you haven’t yet subscribed to ILT, then do so now — that way, you’ll never miss a thing. So, ladies and gentleman, without further ado, I present The Week in Type. Enjoy.

The biggest news from my camp is that ILT will soon be a publisher, the publisher of Codex, the journal of typography. A real ink and paper magazine, measuring approximately A4, and weighing in at around 150 pages. An eclectic mix of longer articles, shorter essays, opinion pieces, interviews, type tips, inspiring type treatments, and … well, you’ll see. I’m more than a little excited about its launch. The presses will begin rolling Q1, 2011. I hope to be taking pre-orders at the end of January. Codex will be available online, and will ship anywhere in the world. The plan is for Codex to be a quarterly. Codex is also looking for advertisers, so if you’d like to be a part of the magazine, then send an email to [email protected]

Always nice to begin with something beautiful. Patrica has photographed and uploaded these wonderful lettering specimens from the French Album du peintre en batîment (1882). Here are just two to whet your typographic appetites (lettering appetites to be precise; but perhaps they will inspire revivals or derivative works. 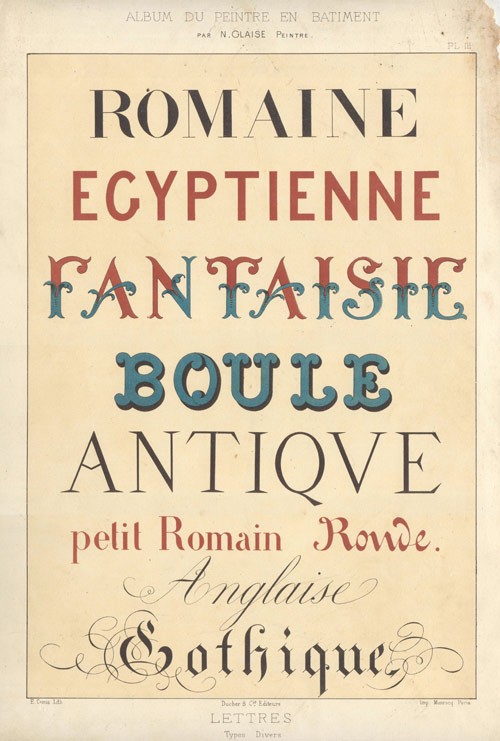 And just one more. This one struck me! Remember this is dated 1882, yet this rounded sans looks so much more recent. Bearing the caption Forme Bambous, or Bamboo shaped! Looks more like steel to me.

Lots more to drool over in Patricia’s Flickr stream.

Sixteenth century scribes didn’t own marker pens, but had they, then they might have done something like this. The wonderfully talented Luca Barcellona:

Legacy of Letters from Vimeo. 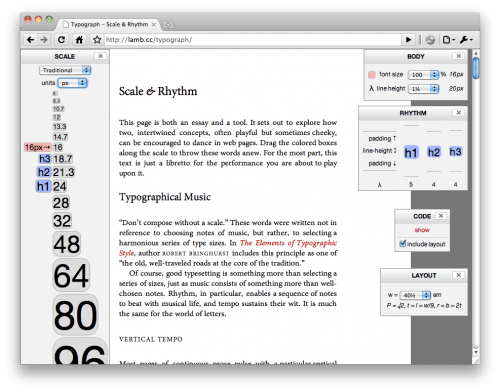 via @klimtypefoundry. Ten points if you can name the typeface.

Ttype is an interesting way to find fonts. For now it only supports Safari and Chrome. It uses the MyFonts database, so tens of thousands of fonts:

A fun book, that would make a fine Christmas present. Hyperactivitypography from A to Z, published by Gestalten. 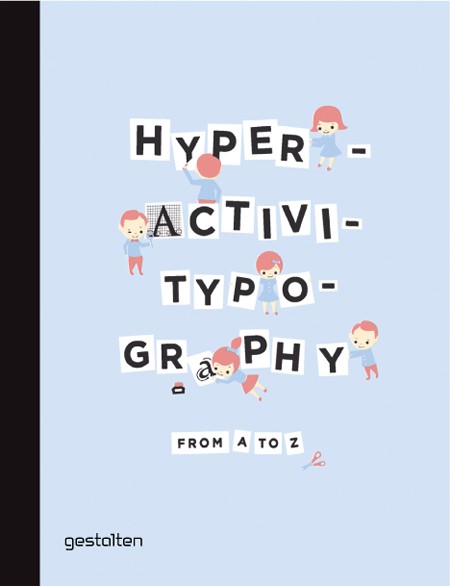 Chocolate. Who doesn’t like chocolate? Chocolate type! Well, you just can’t go wrong, though I might feel a little guilty munching on these gorgeous glyphs. I want to see Johnny Depp and Juliette Binoche eating these in Chocolat Deux.

Drawn, molded, poured (and no doubt eaten) by the Type & Media students. Extra points if you can name all the type styles.

And the making of:

Let’s begin with a script. Stephen Rapp’s Hiatus. Lots of alternates and flourishes. Though it’s a connected script, its low body and generous extenders let in a lot of light. A very pretty script:

Modern takes on Blackletter types can be disastrous, but recently, Martin Wenzel, with Ode, showed that it can be pulled off. The recently launched BAT foundry has pulled it off too. Here’s Adso, drawn by Bruno Bernard. Impressive:

Commercial Type’s latest release will have you sighing ‘oh!’ when you’re looking at the roman; then you’ll be moaning orgasmatronic oohs upon seeing the italic — the fatter the italic, the bigger the ooh. It really is lovely. Paul Barnes’ Dala Floda started out as a logo, then was used by frieze in 2005. Now it’s been expanded to twelve fonts, including that voluptuous Fat Italic. Stencil meets French Renaissance: 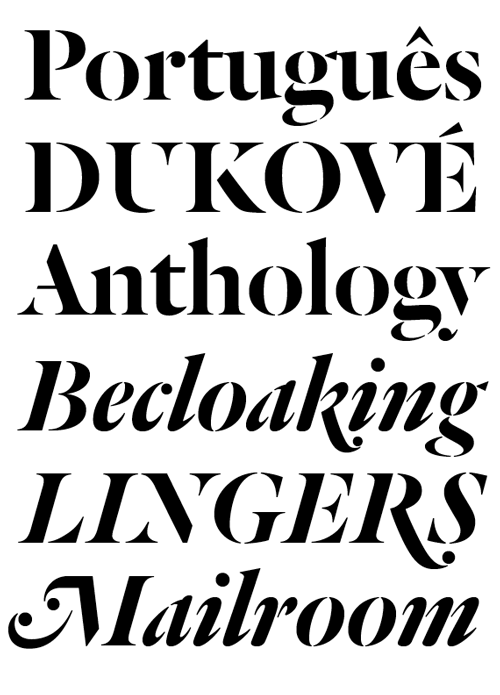 Svetoslav Simov’s reinterpretation of Art Deco in his Aston:

Leyton, a lovely, fat, counterless display face from The Colour Grey, and available through MyFonts.

Perfect for Christmas. Surprised I haven’t yet seen this typeface used in an ad campaign for Marks and Sparks or Coca Cola: Snowflake from Drop Cap Queen, Jessica Hische.

A very neat solution to custom kerning in Adobe InDesign:

Any day now the updated version of the smash-hit Font Game for iPhone and iPod touch will be submitted to the app store. Version two comes with lots more fonts, a terminology game, scalable samples, favourites, Retina Display graphics, Game Center integration, and much more. I’ll shout its release on Twitter. Justin Stahl, the app’s developer, has done an exceptional job. I can’t wait for you all to see it. 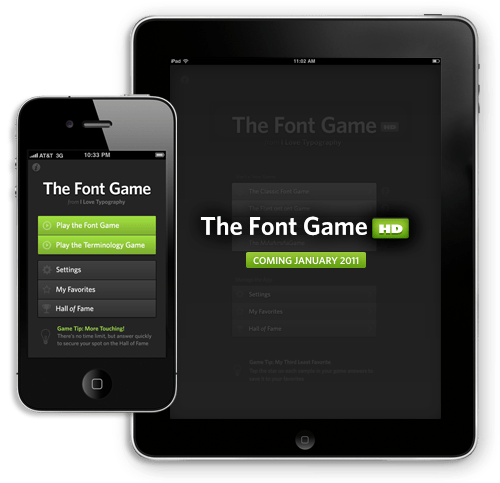 Sneak peek at the upcoming Font Game HD for the iPad. Expect it to hit the app store in January.

And, just in case you missed it, be sure to read H&FJ’s Four Techniques for Combining Typefaces. Forget those silly out-dated, arbitrary cross-reference grids. Read the H&FJ article instead.

Emigre has produced a wonderful series of specimens in their Historia catalog.

Great examples of how to combine type. These demonstrate too that the rules about mixing and matching type are mostly nonsense.

Back to H&FJ: their entire library is now available in OpenType format. Particularly pleased to see Requiem in there. That reminds me: one more H&FJ news item. Something many will be excited about. On Twitter, Jonathan Hoelfer (HEFF-lur) writes that H&FJ webfonts are on the horizon.

I have begun compiling my list of favourite types for 2010. Knowing my luck, December will witness an avalanche of beautiful new types. If that happens, then I guess I’ll just extend the list. In the meantime, you might want to take another look at my 2009 list.

Hopefully, some time before the sun turns into a red giant and vaporises our solar system, I’ll be rolling out a redesign of this site. Very excited about next year, what with Codex, that redesign, weekly Week in Types, and A Beautiful Book, a sumptuously illustrated book I’m co-authoring with Dr Paul Dijstelberge.

Next week on ILT: Sea changes — the coming of the book.

Have a great weekend! It’s back to lots of coffee and lots of InDesign for me.