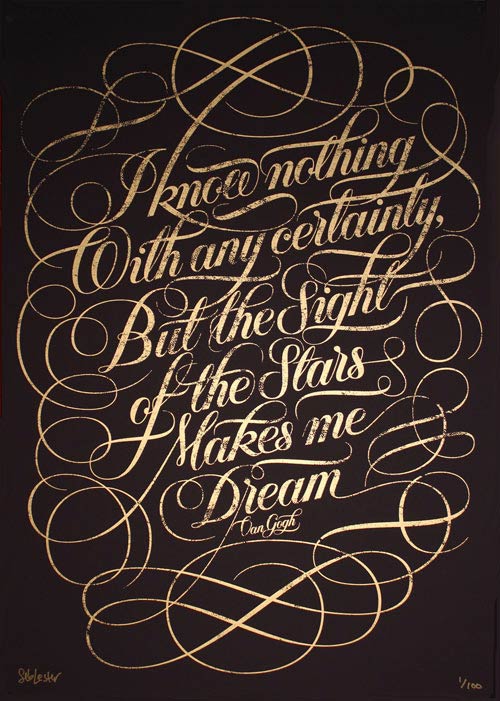 I released three new limited edition prints today, ‘Dreams’, ‘Stars’, and ‘So Much To Do’. I’ll show all three prints in this article, but for practical purposes I’ll focus primarily on ‘Dreams’, one of my most ambitious prints to date. What follows is an outline of what I wanted to achieve, the lettering styles I developed, and why I produced it.

I guess it’s because of my design background that I always write a brief for myself before I start a print — a distillation of everything I want the print to say and do. I always try to aim as high as possible. Shoot for the stars and you might hit the ceiling, as they say.

In the brief for ‘Dreams’ I established that I wanted to draw inspiration from some of the most accomplished lettering in history, but produce something that feels modern and relevant today. I love letterforms and I want to attempt to express that — to design something that hopefully demonstrates a passion and flair for the subject, versatility and craftsmanship.

I think the high water marks in my previous prints have probably been ‘Blazing‘ and ‘Flames’. One of the common denominators in those prints was choosing to limit myself to two lettering styles. Balance, harmony, grace and rhythm are the cornerstones of beautiful lettering. The received wisdom is that it’s much easier to create such things working with a limited palette of lettering styles.

With ‘Dreams’ I wanted to try something else, to push the boat out somewhat and develop something more showy and complex. So I developed five lettering styles for this piece. The designs for ‘Destiny’, ‘Dreams’ and ‘We Shape Our’ would be classified as cursive, flourished, formal scripts. It’s hard to beat this style for sheer unadulterated beauty. To my mind it’s the most aesthetically pleasing classification of all. I don’t think it’s a coincidence that it’s also the most difficult Latin style to draw. The curves, fine hairlines and flourishing in formal scripts leave very little margin for error.

I love strong contrast in design and I wanted to create some bold display styles to act as a counterbalance to the scripts. The two condensed display faces in the piece ‘Believe’ are essentially modern, with echoes of the mid 20th century. It also draws from some exquisite decorative work I saw on 18th century pistols in The Wallace Collection in London. ‘Beauty’ is based on a gorgeous 19th century Stephenson Blake display face, that I modernised and embellished with swashes and a starry sky.

I always try to seek out the best possible materials for a print, and found some amazing papers and inks for ‘Dreams’, which is available in two editions. The first is a glossy metallic black ink edition of 100 on Plike art paper. The second is a bigger scale edition of 100 on Gunmetal Mirri paper. Finishing touches like these can make all the difference, and I’m thrilled with the results. Photos really don’t do the prints justice.

I created ‘Dreams’, ultimately, because I wanted to challenge myself. I’ve been fortunate enough to have been a type designer for ten years drawing corporate typefaces and logos. I thoroughly enjoy such projects, and hope to do many more, but pieces like ‘Dreams’ present creative and technical challenges that rarely exist in corporate environments. This can only be a good thing in terms of personal progression.

I’ve updated my site this week with new type design, typographic illustration, animation, and logo development work. There are also some exciting projects on the horizon. I’d like to have a solo show in London next year of limited edition prints and original pieces. I feel incredibly lucky to have been able to make a living doing what I do. I hope to continue to try to create the most beautiful letterforms I’m capable of producing, and apply them to the areas of art, design, and illustration that interest me most. If I can do that in a focused and intelligent way, I’m hoping the rest will take care of itself!

Here are the other two limited edition prints released today:

Stars
A quote by a man who needs no introduction, Vincent Van Gogh. The words had an immediate resonance with me and I knew I had to do something with them. Available in two colourways.

On close inspection you’ll see the lettering I developed is made up of hundreds of thousands of tiny stars.

So Much To Do
This old proverb certainly struck a chord with me! I found a delightful 19th century display face that I knew I wanted to use. I wish I could credit the designer but I have no record of who that is. The letters warmth and character lend themselves well to this piece and look really sumptuous in metallic gold. The Peregrina paper is a ruby red or deep crimson, depending on lighting.

Seb Lester works in London as a type designer, illustrator and artist. He has created typefaces and type illustrations for some of the world’s biggest companies, publications and events, including the likes of Apple, Nike, Intel, The New York Times, The 2010 Vancouver Winter Olympics and J.D. Salinger’s final reissue of The Catcher in the Rye. He is passionate about letterforms. @SebLester