When designing a typeface, I prefer to explore a construction principle rather than revive an existing typeface idea. These principles or writing models are based on the tools and techniques originally used. Understanding these workings are often a great source of inspiration for me.

The starting point for my latest typeface Ode was the Textualis, one of the various broken script writing models. It has a strong modular build suggesting that it’s easily constructed. Albrecht Dürer further reduced it in his Underweysung der Messung, mit dem Zirckel und Richtscheyt, in Linien, Ebenen unnd gantzen corporen.

This brings us to the first disadvantage of this model regarding its legibility. Because of its simple construction and repetitive pattern, the letters lack individuality, thereby making it more difficult for the reader to tell them apart. Similarly problematic of the Textura model are certain archaic letter forms which are unfamiliar to us because today we predominantly read texts that use the humanist model or its derived forms.

Another readability issue of many classic interpretations of the Textura model is the high contrast between the foreground (letters) and the background (paper or screen). Imagine, for example, a whole page set in a bold typeface.

Tannenberg, a commonly used broken-script during the Third Reich. Even today it’s indelibly tied to this period as the headline in this example shows. (found on http://www.sostars.com).

Another issue that I am especially aware of (being German born), is the association of broken script typography with the Third Reich.* The rigid formal construction has become synonymous with severity — even brutality — its negative associations are now used (in attempts) to express nonconformity.

Considering these above-mentioned ‘shortcomings,’ I needed more leeway for the conception of Ode — a less orthodox approach to the model. 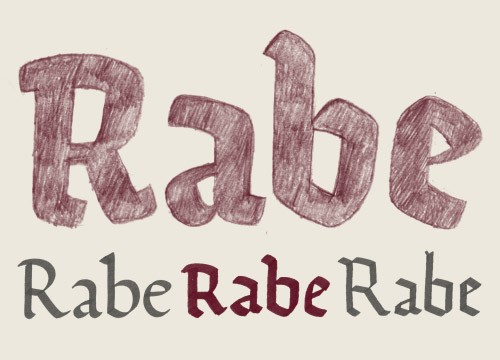 An early sketch; on the bottom are writing examples of the humanist model (left), textualis (right) with between them, a mixture of both.

I loosened up the stern construction of the straight segments and hard corners to give the design a smoother, organic and overall friendlier appearance. Specifically, I rounded off the corners of the outer shapes and curved them while keeping the fractures within the counters intact. To make the whole design more lively and give it more tension, I slightly slanted all letters to the right and shifted the weight within the characters subtly upward, away from the base-line.

Initially I focused on the design of the heaviest weight. But since I had wanted a text typeface, I also needed to draw lighter weights without losing the visual connection to the boldest variant. This was an interesting task since the construction of the Textura model relies on a minimum stoke width without which the elements of some characters would disconnect. So the next liberty I took was to adjust the construction of the lighter weight, introducing a bow that would — as for example with the letter n — connect otherwise disconnected stems. Even though this type of construction is closer to the humanist model (derived from the gothic Textura), it still is compatible: both models are based on writing with the broad-nibbed pen.

Next on my list was dealing with characters like k, x, z and ß, or X and Z. Letters that — if drawn in their archaic form — are simply unfamiliar to most modern eyes. We are often only able to guess the character from its context. Again a more humanist construction was my ideal solution for this problem. The same adjustment to the construction was applied to letters D, M, N, P, U, V, W, and Y so that, while still recognizable, they would not stand out too much for my taste.

To dissociate the typeface further from the typical idea of a Blackletter, I intentionally did not give Ode a long s (ſ), ligatures like ch, or any letter form reminiscent of the classic model. In designing Ode I wanted to give the Textura a fresh start.

By working with a derived model for the letters, I had greater flexibility to extend the typeface’s possible form elements. These I could now re-apply as I designed the figures, allowing, in my eyes, a perfect harmony with the rest of the character set.

In Linotype’s Fette Fraktur™ (first line) — one of today’s more popular blackletters — the figures are neoclassical and are drawn without fractures. Apart from the contrast, the style of the figures does not integrate so easily into the whole. Ode’s flexible design principles permits figures to harmoniously match the rest of the character set.

Had I gone for the Textura as is, the result would have surely been much closer to the classical model. Instead I allowed myself to be influenced by other models and thus discovered my own rules. Maybe I would even have managed to do what I had in mind initially: designing a Textura-related typeface without a severe or archaic look. In my mind this interpretation is a friendly one, a more open design, one that doesn’t require you to decipher text — but just to read it.

Looking at Ode makes me think of food — something that I actually do quite a lot. No Nouvelle Cuisine here but rustic fare, dishes served in bowls and plates with a thick rim, lots of herbs and a wooden board with freshly sliced bread. All that accompanied by a simple vino tavola, a Montepulciano d’Abruzzo maybe. Enjoy your meal!

Ode is available at Martin Wenzel’s foundry, Hannes Famira’s foundry, and from MyFonts.