The impetus for Founders Grotesk originally came from Duncan Forbes of The International Office. We had often discussed the nature and usefulness of the classic grotesks, and the possibility of creating a new one. After trawling through my 1912 Miller & Richard specimen, he became enamoured with their series of Grotesques, particularly the No.7 all-caps showing.

He noted the appealing rudimentary geometry, the serpentine S, and the narrow but welcome aperture of the C and G. Even though I was aware of these styles, I hadn’t considered their possibility for contemporary interpretation. As Duncan is an excellent graphic designer, he saw potential in the Grotesques. I have learned that graphic designers see typefaces differently to type designers—it is wise to take note when their interest is piqued.

The top row is original scale, the bottom is rescaled to common size. Doric No.4, H.W. Caslon, 1919

One of the decisions revivalists face is which size of metal type to base their design. Before digital type each point size was cut specifically, creating necessary variations in letter shapes, spacing and proportions. Even if a letterform is exactly the same shape throughout every size, ink squeeze and paper stocks would ensure distortion. The example above demonstrates the variety of a single letterform found in the H.W. Caslon Doric No.4 series.

The revival decision can be further exacerbated by groupings of seemingly unrelated fonts under a single name, like the above Breite Grotesks from the Bauerschen Giesserei foundry.

However, Founders Grotesk is not intended as strict revival—the Miller & Richard Grotesques are simply used as a starting point. Founders Grotesk is a gentle amalgamation of several fonts, resolutely designed for contemporary typographic usage. A key glyph that demonstrates the departure from strict revivalism is the R. The R in the Miller & Richard range seemed slightly too awkward for a contemporary setting, so the Doric No.7 Series was consulted.

Due to the lack of large size numerals in the general showings, the dedicated numerics section in the back of the Miller & Richard specimen proved invaluable. Note the fascinating 5, which looks amazing here, but was deemed too anachronistic for Founders Grotesk. The narrow apertures of 5, 6 and 9 harmonise nicely with the C and G. 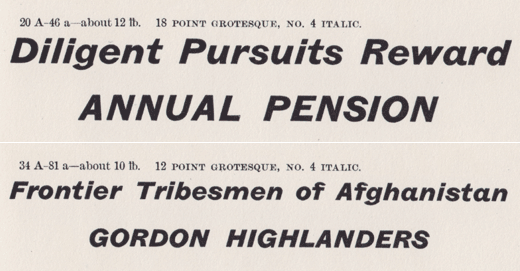 The italics of the original Miller & Richard Grotesques are wonderfully slanted, they seem serious and daring at the same time. A similar slant has been designed into the Founders Grotesk italics, but there are also many key departures. For example, the spur on g tail, the protracted tail of the a, the curve on the u spur and the kink in the f were all discarded for more contemporary shapes.

The spacing in Founders Grotesk is purposely tighter than any of the referenced typefaces. I have found that graphic designers will happily use a sans serif at all point sizes, often tracking the default spacing to suit the size. As it’s simply not possible to space a single font optimally for all point sizes, I feel that designers can obtain better results by opening tight spacing for text, rather than closing loose spacing for display. 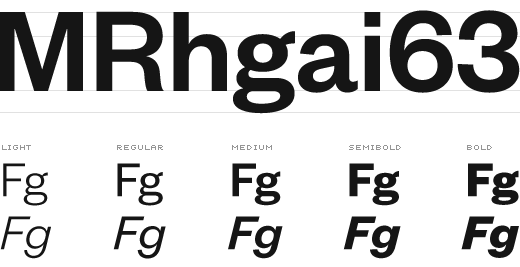 Founders Grotesk was commissioned for completion for the upcoming redesign of a newspaper, lead by deLuxe & Associates. It includes five weights in roman and italic. Founders Grotesk ships in OpenType format and is available exclusively from vllg.com.

Kris Sowersby is a professional type designer from New Zealand. You can view his web site here, and buy his typefaces here.