The Making of Vesper

Vesper was developed over the course of almost three years. For this article, I’ve divided the process into two stages: #1 during my studies at the University of Reading; and #2 After Reading. Hopefully through this highly-condensed-yet-still-rather-wordy account of this project you will learn some interesting bits regarding my first major type family, the design process, and the MATD program. 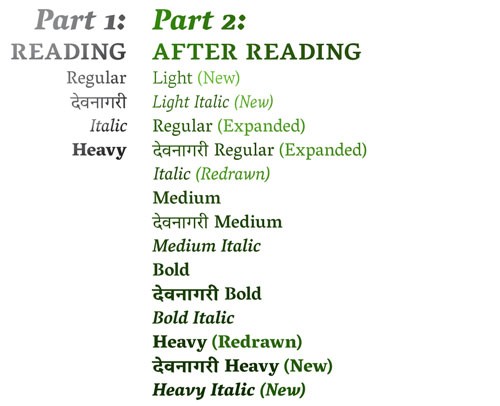 Part 1 – During the University of Reading’s MATD Program

Vesper began as my practical project while attending the MA in Typeface Design (MATD) program at the University of Reading (2006–07).

The course began in October and by November we were all sketching letters and trying to form concepts for our typefaces. Some were off and running quickly, others took some time to find their way. I was the latter. For months I struggled with one horrible idea after another—you would probably be shocked to see many of my early drawings.

My personal breakthrough came in the form of Fiona Ross’ north Indic workshop. This three day event sparked in me a strong interest in Devanagari and non-Latin typography. I decided to add a complementary Devanagari design to my type family and then began intensely practicing Devanagari lettering and calligraphy. These experiments directly inspired many of Vesper’s key stylistic features, as you will see below. Beyond simply influencing this project, my new-found passion for non-Latin typography has become a cornerstone of my interest in type design, research, and Mota Italic. I owe a major ‘Thank You’ to Fiona Ross for this.

The majority of development time at Reading was spent working the regular. More than any other weight or style, the regular is used the most and defines the feeling of the whole family. Finding the overall direction for the design was by far the most difficult part—especially defining how elements such as the curves and angles worked. But once I found the right path, progress was slow yet steady—rather uneventful actually. Most of my decisions about basic proportions, extender lengths, cap height, the amount of contrast, etc., were made intuitively. I used my eyes and personal preferences to decide, rather than measuring and comparing my design to other typefaces. 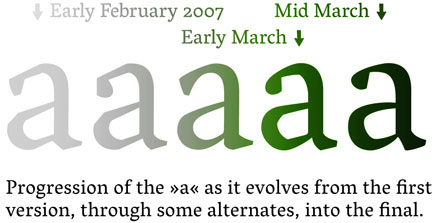 Beginning a non-Latin script, or a non-native writing system, is a serious enough topic for a whole separate article. But briefly: after my jump-start from Fiona’s workshop, I continued practicing lettering on my own and by making use of the university’s significant typographic non-Latin collections. The two key factors in successfully approaching a complex project such as this were time and access to useful materials. I was able to spend countless hours consulting the libraries and archives in Reading and London where I examined old books, magazines, and newspapers; as well as studying font specimens and many items from Fiona’s personal collection. Reading also has a built-in support environment of advisors and friends who are both helpful and encouraging when starting a project like this.

Bold weights are generally pretty closely related to the regular weight, but they can still have some variation. Vesper’s heavy is fairly straightforward; it’s a much fatter regular, featuring a higher stroke contrast.

Italics, on the other hand, can be radically different from the upright versions. It’s a challenge to find the right balance for the regular and italic: how similar or distinct should they be, while also neither being too conservative nor too extreme. Taking these challenges into consideration, I made many versions for the italic and spent a good deal of time before adopting the appropriate style and feel.

A common misconception about the MATD program is that students finish with complete typefaces—this could not be further from the truth. In my case, the regular weight was fairly complete; the Devanagari and heavy designs were decent (having a few hundred characters each), but the italic only had a lowercase and a sloped (and barely adjusted) set of capitals.

One of the tiniest aspects of the heavy and italic that has gotten some attention is the various ‘dots’ (i- & j-dots, period, comma, dieresis, dot accent, quote marks, etc…). They are interesting because as the weights change, the dots rotate and move into new positions. The ‘diamond’ shape is another crossover from Devanagari where its dots (the nukta and anusvara) are traditionally in a similar style. However, I felt the diamond dots were a little too distracting while reading large amounts of text. To counter this effect the dots were rotated to a more neutral, horizontal position in the light and regular weights which tones them down. Then as the emphasis gets dialled up, the dots stand up as well!

The amount of work to be done or redone after finishing the MATD course was astounding. Over the course of the next two years I redefined the character set (doubling the language support and glyph count), redrew the heavy and italic from scratch, then added additional weights and styles.

Re-Drawing the Heavy and Italic

After some time away from the designs, it was much easier to see some of the issues and evaluate how to change the heavy and italic. During my studies, there were some aspects of these designs that just didn’t seem right, or that I didn’t have the time or expertise to correct. Once I got back to work, it was actually quicker and more precise to simply redraw these two styles from scratch, rather than to adjust the old files. This sample shows some comparison between the old and new versions.

Bold/heavy italic is usually fun as a design, but not always such a joy to draw. This master in Vesper was deceptively difficult to get right. The main drawing happened in only a few days; but then the cleaning up, refining and getting all the nodes in just the right places took several extra weeks.

The light masters were added later, somewhat as an after-thought. The regular weight was always intended to be strong and robust with a dark (printed) color. However, after considering a wider range of potential font users, I decided to include a slightly finer version. The light helps extend the scope of the family for when you need something a little more delicate, and permits a few extra words per page.

Throughout this process I learned that good spacing and kerning go a long way to making a design smooth and even, but there will always be difficult combinations. Particularly with serif designs, there will be both dark spots from letters touching; and large white gaps from them being too far apart. This is where Vesper’s most interesting feature comes in: contextual alternates.

I spent a great amount of time looking at all the problematic letter combinations and came up with many alternates to help. There are over a hundred additional characters (including accented versions) that get automatically substituted in certain letter sequences. They are only subtly modified from the default shapes, but they can still make dramatic changes to the text. The key was to adjust the serif lengths and the angles of diagonal strokes in order to separate the individual letters by a fraction. This not only resolves most dark spots caused by collisions, but it also aids in reading by helping to identify each character more easily.

Vesper for the Web

The latest step in Vesper’s development is to make it more useful for on-screen reading. This was not an initial goal of the design, but it has shown to work pretty well. We are at this very moment adding some intricate TT hinting to all the weights—this helps to make it even more clear and comfortable for use on the Web. It ships as .TTF OpenType fonts and is embeddable directly on your server. The updated packages will also include .woff, .eot, and .svg formats for all your embedding needs. These should all be available by the end of the year. 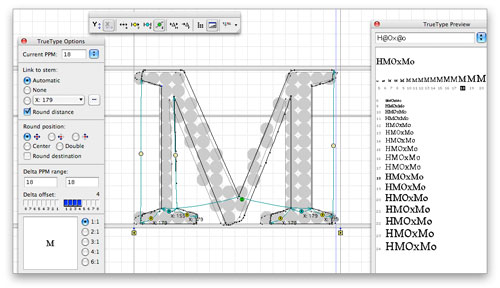 The Future of Vesper

Please feel free to let us know what you think of Vesper. We have many plans for future expansions, including sans serif versions, optical sizes, and further language support. Feedback from customers, friends, and critics is always appreciated—we are always happy to hear your input!

previous: Our own alphabet