Welcome to another roundup of what’s new in type. If you missed the interview with French type designer Alice Savoie, then be sure to take a look. Alice’s next typeface, Capucine will be released through the Process Type foundry. Follow them on Twitter, and you’ll be informed the moment it’s released.

Not quite sure how I failed to mention this before. Chester Jenkins & Kris Sowersby bring us Galaxie Copernicus:

the seriffed sister of Galaxie Polaris. And speaking of Kris Sowersby, I received this stunning KLIM type foundry specimen in the post. KLIM is Kris’ foundry. The specimen is really a well-designed book. (There should be a photo of it here, but I couldn’t find my camera’s USB cable). There are few foundries that actually produce good printed type specimens. H&FJ is one of the exceptions; Typotheque another. Can you name a few more? There are some. A limited number of Kris’ specimen books will be available on vllg.com.

Right now, Kris is on a speaking tour of Australia. Dates and venues can be found on the AGDA Web site. And here are the tour posters: 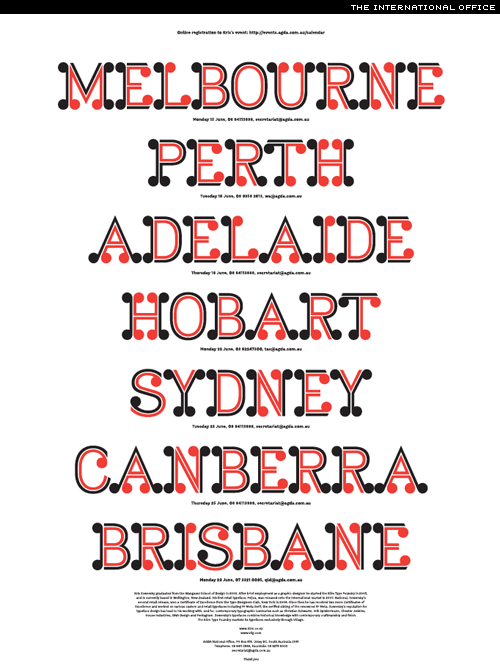 Designed by the talented Duncan of The International Office. The poster is set in National (Kris Sowersby) and Exotique (Kris and Christian Schwartz) for House Industries’ photo lettering collection. I’d love to get my hands on these posters.

I’ve been using Mark Simonson’s Anonymous for coding, for … a long time. The updated Anonymous Pro is a family of four fixed-width fonts. Oh, and did I mention, it’s free! (copyrighted freeware). Be sure to take it for a spin. I think you’ll be impressed.

Discovered this absolute gem of a script from @stwef. Linotype Gneisenauette. Here used in NewWork Magazine:

Fantastic, isn’t it. Available through FontShop.

The four fonts are just US$19. That’s a limited-time offer, so be quick. Also, see what Dan of TypeOff has to say about Axel. Also featured on the FontFeed.

A double offering from award-winning SuitCase. First up is the slab serif Kulturista:

And Nudista, proffered as an alternative to grotesques like DIN.

Not available as a font file, but available as vectors. There are many more interesting type treatments in Simon’s Typography is everything Flickr set, and on his blog. Via Paul D. Hunt on WLT.

I’m still a big fan of Stefan’s Anziano and its lovely set of ornaments:

(The ornaments either side of the RSS feed count are Anziano).

Be sure to visit Darren Scott’s Typographics blog:

I shall say no more.

An interesting discussion on Typophile — initiated by Matt & Aaron of RBtL — on a donation-funded, non-profit, free font foundry.

Since the announcement of TypeKit, the Web has been awash with talk of Web fonts. The following will bring you up to speed:
Typekit blog: 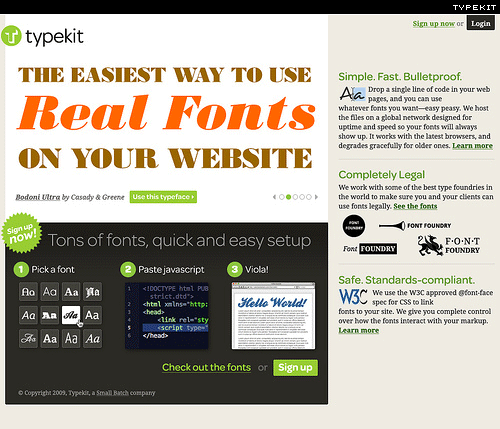 My thoughts (briefly):
I’ll be outlining my thoughts about Web fonts in my upcoming (yes, I know it’s been a long time coming) Why type matters article. Right now there really isn’t that much information available. We don’t know how many foundries will be involved, and we have no idea of the pricing structure, so I’m ‘waiting and seeing’. What I am happy about, is that the years of hot air are finally beginning to condense. That someone has the gumption to actually make this happen — that impresses me. Ultimately, if you don’t like the idea of paying for an additional or extended license for Web embedding, then the solution is pretty simple: don’t buy it.

And it looks as though Typekit already has a competitor (though at this stage they are merely competing ideas, rather than competing services). It will be interesting to learn more about Richard Rutter’s solution. In all of the discussions about Web fonts, the only thing that annoys me (and I don’t lose any sleep over it), is that some feel that they somehow have a right to use fonts for Web embedding. I think it’s important to put oneself in the shoes of a type designer who makes his or her living from selling fonts. Type designers should be no more obligated to give away their fonts, than Lexus should be obliged to give away their cars. Anyway, this year could prove to be something of a watershed for type on the Web. All in all, very exciting.

After an initial ban by the silly Victorian prudes at Apple, Eucalyptus is now available from the app store. It’s an iPhone e-book reader with access to some 20,000 English-language titles. The text displays beautifully: 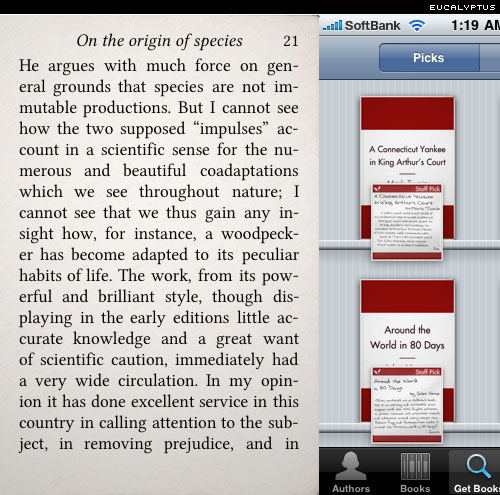 At $9.99 it’s not cheap, but I do think it provides the best reading experience for the iPhone. Pocket Picks has a good review. 20% of gross profits from Eucalyptus are paid as a royalty to the non-profit Project Gutenberg Literary Archive Foundation.

TypeDrawing is another iPhone app:

Not revolutionary, but for $.99, it’s fun. There’s a Flickr group too.

WLT’s co-creator, Kari is working on a raft of new and brilliant features. Our aim is to get more people involved. But rather than open it up to everyone (which invariably will dilute its strength), we’ll be enabling a secondary kind of contributor account. Stay tuned for more news on that. And while I’m the subject of WLT, here’s my WLT pick of the week: 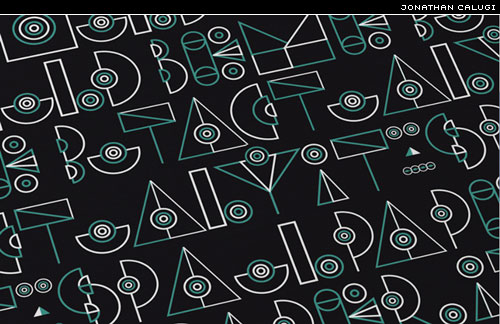 My first ILT poster should go on sale some time next month. A fairly simple affair. A screen-printed poster, set in Restraint, and printed on A2 black Plike paper. Limited edition of 150. This is not the final design, but it will resemble this: 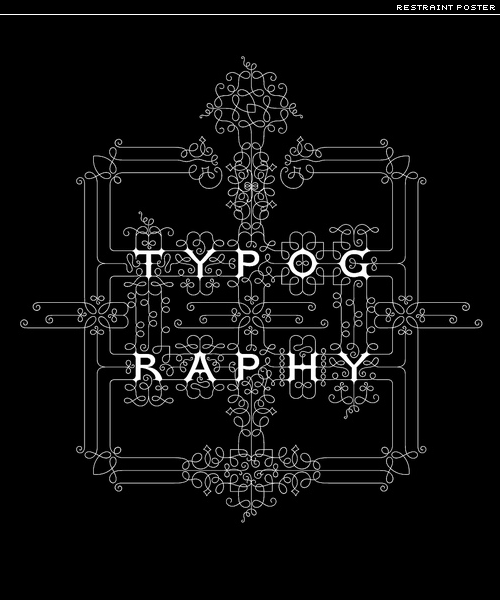 I’ll also be giving two of them away. My second poster will be of my own lettering. There are still several of Seb Lester’s Mightier posters available from the ILT store. More designs coming soon.

I’ll soon be launching ILT’s gargantuan give-away. 40 wonderful prizes from the likes of Veer, FontShop, and House Industries, plus books, t-shirts, software, posters, and much more besides. 30 of the 40 prizes will be distributed via Twitter, so be sure to follow ILT. You can always unfollow afterwards. I won’t be offended.

Have a great week.

previous: An interview with Alice Savoie