Every year The St Bride Foundation holds a lecture in memory of Justin Howes, a great typographer and historian who was instrumental in supporting the St Bride Printing Library. He re-established the firm of HW Caslon, published books, organised exhibitions, delivered lectures and worked with the Type Museum in Stockwell, finally moving to the Plantin-Moretus Museum in Antwerp before his death in 2005, aged 41.

Previous lectures have been popular, but demand was so high for this year’s lecture that all the tickets were booked up in two hours and it had to be moved to Conway Hall to allow more people in, and still there was a waiting list. Given that Matthew Carter was giving the lecture and he would be talking about his views on type revivals, it was perhaps not so surprising so many people wanted to go. For an hour he talked through the development of some of his typefaces and his philosophy not just on revivals but on type design in general. I suspect it’s this philosophy and thinking that interested a lot of the attendees, including me, so I’ll focus more on that here. 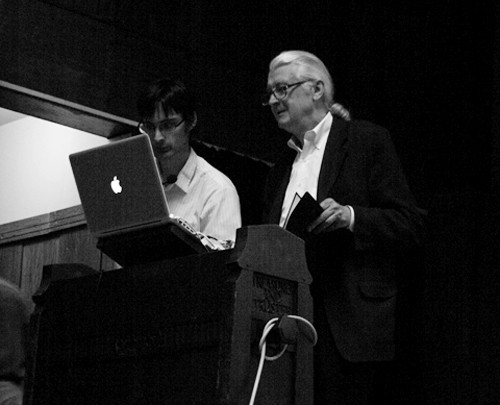 Throughout the talk, and right from the start, Carter emphasised how he was presenting his own views on the subject and not advocating a particular approach, stating, ‘I’m not a ‘nostalgist’, I don’t believe type should look like it did in the 15th and 16th Centuries. You could describe me more of a ‘presentist’ given to typographical regressions’. 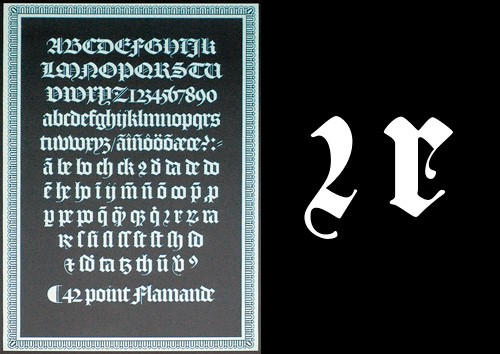 I found one of the earliest bits of work he showed rather interesting. He had recreated a missing ‘ragged r’ for a blackletter font used by Oxford University Press, and I must admit such a thing was new to me. I must have seen (and traced) that form of the letter thousands of times and in context actually read it as an r, but hadn’t thought much on it. To explain, a straight ‘r’ is used after a straight-edged character, and the ragged form is used after a round-edged character. The book in question was on the history of printing, and so the missing character would have been somewhat embarrassing for the OUP. You learn something every day…

Carter spoke often of the help that St Bride Library has been throughout his career, with various anecdotes of sneaking books out of the library to get Photostats done round the corner on Fleet Street. Later, I assume, the Library must have got a photocopier of their own because Carter said that its work would play a starring role in the talk through the examples on his slides. 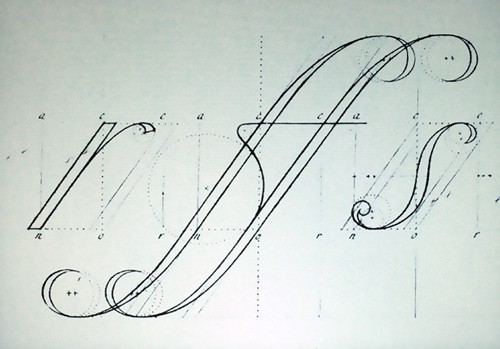 One of the fascinating copies he showed were those of Ambrose Heal’s History of English Types, showing the mechanics and geometry you should follow to reproduce the lettering. 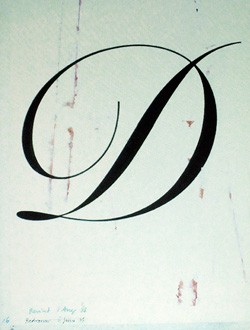 Carter remarked that for a student armed only with a quill the instructions must have been terrifying indeed, but for a type designer the detailed diagrams were an absolute boon; from them he eventually created Snell Roundhand. He also said that revivals and re-creations like this are only possible with digital type – looking at the incredibly beautiful but very deeply kerned double-f ligature, you realise why. Kerning as deep as that ‘would be impossible in metal type’.

He showed some preliminary sketches for the script, which he cheerfully admitted were entirely bogus, saying, ‘Almost all of the preliminary sketches you ever see for a typeface are bogus, created after the fact because a reviewer asked to see them’. So if you ever wondered how these sketches were always so neat and perfect, that’s why. One genuine piece he showed though was the ‘D’ which only exists because someone at Linotype spilled paint on it and it was sent to him to clean up. He promptly forgot about it and it remained in a desk drawer until long after Linotype had decommissioned their Photostat machines and, incredibly, destroyed all the production drawings with them. Carter thanked the clumsy printer for damaging the drawing and ensuring its survival!

At this point he provided some more insight on his philosophy, in that to recreate the original exactly would be to create a pastiche, something of limited use and of interest to very few people.

He likened historical types to musical scores. We can replay them by reviving them, but we can never recreate the original perfectly, as it was a product of its time and place. Each era has its different needs, its different fashions and different typographical conventions. He said to be a type reviver, you need to be an amplifier, a translator, to adapt the original ‘score’ to its new ‘performance’. It’s an interesting approach and I completely agree — just resurrecting an old type isn’t enough, you need to restore it, breathe new life into it.

So for Big Caslon, Carter based much of his revival on the recut of the 1880s, it was, in his words, ‘a revival of a revival’. He recreated swashes that had been introduced in the Victorian recut, admitting that they weren’t quite right for the face but that it was necessary they be included because the Caslon that people were familiar with had them, and they would be missed.

From there Carter spoke on the development of Miller and Century, both of which are pretty well documented elsewhere so I won’t reproduce it all here. He did make a comment on the cliché of Didot-esque faces in fashion magazines which ‘refuses to die’, saying, ‘Perhaps it’s because the hairlines are so anorexic, they represent some kind of ideal for a fashionable typeface?’

One other comment here caught my attention as it fits closely with my own philosophy. While describing the development of the Newsweek typeface, he said he’d come across some font samples produced by Figgins Foundry, and digitised them himself: “To understand something, take it apart and put it back together again. Digitise it.” I couldn’t agree more!

The last revival project he talked about was for Yale University. He had the job of creating two faces for them; one for general use in print, downloadable and usable by everyone associated with the university for use on everything from PhD theses to invoices; and another for use on the University’s signage around campus.

The latter was apparently the most urgent, as Yale had virtually no signage whatsoever. The signs that did exist were carved into the stone on various buildings, usually in heavy blackletter or other medieval forms to match the Gothic-Revival architecture of the University itself. None of it was particularly readable, so something had to be done.

He explained a little of the background to the project: Yale has an original copy of Aldus Manutius’ De Aetna, which was the inspiration for Bembo, and the high point of Venetian Roman type. Bembo was the face that Yale were using already for their official documents, so Carter designed the new typeface as a revival directly from De Aetna, which (I would think) meant he could spend lots of time studying the original manuscript. 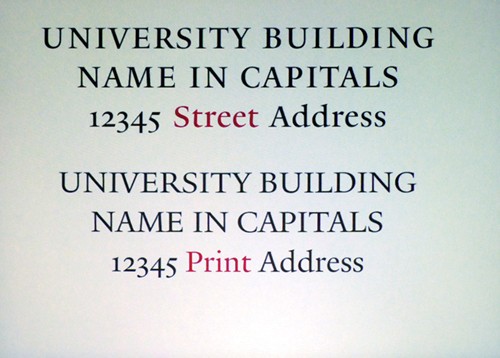 This is an example of both faces together. You’d expect looking at these that the top one is for print use, and the bottom one for signage — after all, signs are basically display type, right? In fact it’s the other way round. Signs, Carter explained, have much in common with captions; they tend to get viewed from a distance, under less than ideal lighting conditions and from various angles, so are often at the limit of what the eye can perceive.

In the end, the Yale signage face was far more successful than Carter imagined. Since 1701 Yale had virtually no signs on campus, but after the face was designed there were signs everywhere. In his own words, the typeface effectively ‘went viral’, appearing not only on buildings but sprinkler valves and recycling bins. Everything that could be labelled, was.

Carter wrapped up the talk at this point with another good point on his philosophy on revivals, for which I shall have to paraphrase as I didn’t write down his words precisely, ‘However gigantic the giants upon whose shoulders we stand, by virtue of your additional height you can still see, however slightly, further than they could’.

And then we had some questions, which raised a few other interesting points.

Q. Is all old type worth reviving?

According to Carter, no. ‘The only reason most old types have survived is because someone was too lazy to throw it away’.

Q. What about new technology? Does that make it easier? Too easy?

Carter: The technical part of type design is not the difficult part. OpenType will not make you a good type designer. He said he sees students producing 800 characters really quickly, where by the same point he would still have been working on type pairs such as na, nb, nc and so on. He said that it’s easy to race ahead without having got the basics sorted, and that on his courses students aren’t even allowed to kern until they’ve got to a fairly advanced level, as kerning can mask fundamental problems in the design of your type.

He commented that OpenType is revolutionary and useful but has far greater relevance to non-Latin scripts, that writing systems that couldn’t be digitised before now can be. I would say that this is going to be one of the interesting typographic developments of the 21st century, as more writing systems become available online, how will the Anglo-centric internet develop and change? Will it break everything? After all, even now we have character encoding problems online, and that’s often with pages written in English!

Q. What is your methodology on producing type?

Carter said that he doesn’t draw well, so as soon as he didn’t have to, he stopped. He now draws directly onto screen.

One final, and very good point he gave was that when teaching he tries not to be doctrinaire; so many type designers are self-taught, there are so many routes into the discipline that there are many more valid approaches than the one he uses.

Pretty informative, and highly inspiring all round. Thank you Matthew Carter, and St Bride!

Aegir Hallmundur is a UK-based designer, and author of Ministry of Type.

next: An interview with Alice Savoie