If you’re a designer and haven’t already heard about Typographica‘s relaunched site and Favorite Typefaces of 2008 list, chances are you’ve been stranded on a desert island, far away from any relevant news sources. And even then, the list has received considerable attention beyond the usual design and typography blogs, getting mention in sources that wouldn’t usually have much to say about type. 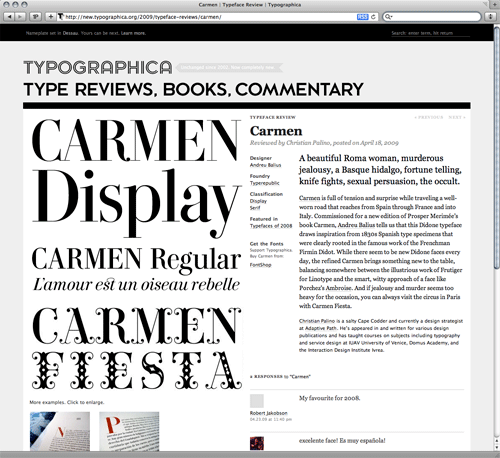 With all that coverage already out there, what’s left to say that hasn’t already been mentioned? Stephen Coles has written and spoken about the history of Typographica and the reasons for its redesign; Joshua Lurie-Turell (Typographica’s founder) has bestowed his blessing on the new site; and countless other sources have heralded, congratulated, and approved via blogs and Twitter updates.

An element of Typographica that I think deserves to be noted—and indeed has contributed to the site’s fine reputation—is how it is purely about type for type’s sake… type for the joy of type. Consider the following, from a “font industry” point of view: Both Stephen Coles and Chris Hamamoto (the site’s editor and designer, respectively) are employees of FontShop (a major font distributor). Knowing that, one might assume that the content is biased accordingly, that the opinions expressed are not objective. However, Typographica’s vast archive is evidence to the contrary.

For instance, despite my own employment with MyFonts (another major font distributor), I was  honored with being invited to write the introduction to this year’s Favorite Typefaces list. Also note that Stephen has written fair commentary on numerous other topics in the past, despite a direct relation to his professional circumstances.

Historically the site’s contributors also come from every facet of the type world, presenting views from about as many “competitors” in one place as is possible. I use the term in quotation marks, because—regardless of politics—a mutual passion for typography in some shape or form will bring people together as the best of allies. Typographica embodies that spirit perfectly, where the only thing that matters in the end is the love of type.

Listen to Stephen on the RBtL podcast.

next: Show some restraint