Last week, Linotype released my newest typeface family, Malabar. With six fonts for the Latin script, Malabar is a sturdy oldstyle serif. Designed for extensive reading, Malabar was originally part of a larger design project conceived for Indian newspapers, and a Devanagari addition will be released at a later date. After that, who knows?

I began work on Malabar about 17 months ago, as a postgraduate student on the MA Typeface Design course at the University of Reading in the UK. Back then, it had the working title Martel. My brief was to create a Latin and Devanagari newspaper face for the Hindi press. 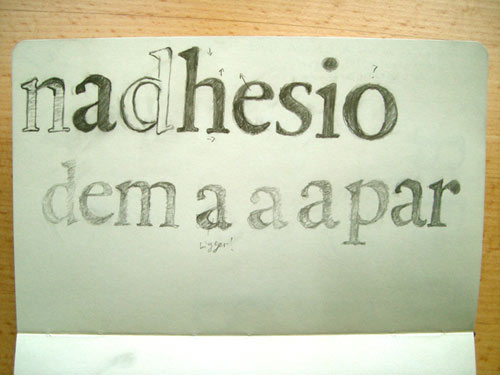 The above sketch is from November 2007. I had been looking at a lot of Hendrik van den Keere, and a little bit of Miklós Kis, and it was time to start drawing Malabar’s first letters in FontLab. I should point out that I don’t work out all of my ideas on paper before I begin drawing digitally, but I do use my sketchbook to record thoughts about letters, and to occasionally try out a few shapes. I don’t expect these sketches to be pretty or accurate; my sketchbooks—when I keep them—are much more stream-of-consciousness.

So what are we looking at here? This is my observation of some van den Keere-y display type, or at least the sixteenth-century book equivalent of display type. The relatively high x-height and the combination of the chunkiness of the letters with a high level of contrast captured my attention most. There is some degree of angularity in the letters, especially the a. The letters’ terminals are on the heavy side.

Above are the same letters from Malabar’s released version. What happened from there to here? Well, the terminals became even heavier, and the serifs have changed, too. There has been some reduction of the angularity, but I’d still say that this has a sharpness to it. Certain characters are much wider, particularly the s; the lowercase s is just expected to be wider now than it was during the Renaissance.

Is 17 months a long time for a typeface like this? I spent about nine of those months working on the typeface as a student, plus another two after I returned to Germany. There were a few months in between where I was working full-time on other projects, and did not touch this typeface at all. And then the necessary production work gets added in…

iLoveTypography.com accompanied me along almost every stage of Malabar’s development. The site launched in August 2007, about two months before I began my MA course. I can’t exactly recall the first article that I read on iLT, but it was probably the Decline and Fall of the Ligature, from the beginning of that following September.

As John pointed out recently, we tend not to offer detailed PDFs of our typefaces at Linotype.com, although every font does have a basic PDF that may downloaded and printed. Malabar, however, is one of a few exceptions. Also, at the Reading MATD Alumni site, there is a detailed PDF that may be downloaded for Martel. Note, however, that the Bold and Heavy weights have changed significantly since that Martel PDF was published. Bold Italic and Heavy Italic fonts have been added to the family, and none of the Malabar fonts have Devanagari character sets.

Malabar received a Certificate of Excellence at the Type Directors Club of New York TDC2 2009 competition in 2009.

About the author:
Dan Reynolds is font engineer and typographic specialist at Linotype in Germany. You can see his personal blog at www.typeoff.de

next: The first one’s the hardest