It has been predicted that Apple will have sold 45 million iPhones by the end of 2009. And that’s before it hits China. There aren’t hundreds of type-related apps for the iPhone, but here are few; and a few type-related tips too. (Helvetica Moleskine give-away details at the end).

Recently released, MyFonts’ What The Font for iPhone is a terrific little app. The biggest barrier is not MyFonts’ image recognition technology (which has proven itself online), but the dreadfully inadequate iPhone camera. However, despite that it does a pretty good job. Just ensure that the lighting is good. 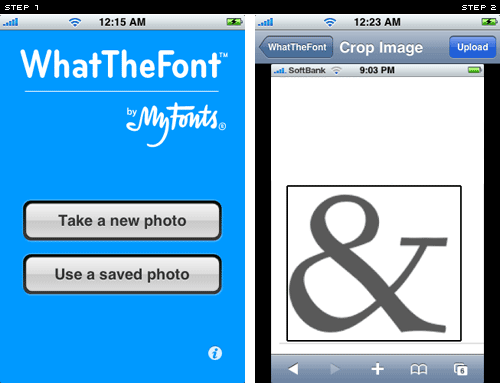 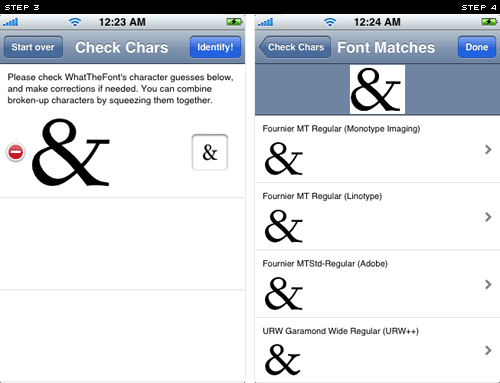 And remember, that even with a great photo and big type, there are no guarantees. Although the MyFonts database of type is big, there are numerous foundries and faces that just aren’t there. For example, you won’t see the likes of H&FJ and the Gothams. There’s a review of the app over at DesignWorkPlan. See my font identification post for further resources.

The next app (free) is imaginatively named Fonts. It’s incredibly ugly (I refuse to post the app home screen here, lest it set off a migraine), but it lists the iPhone’s system fonts. 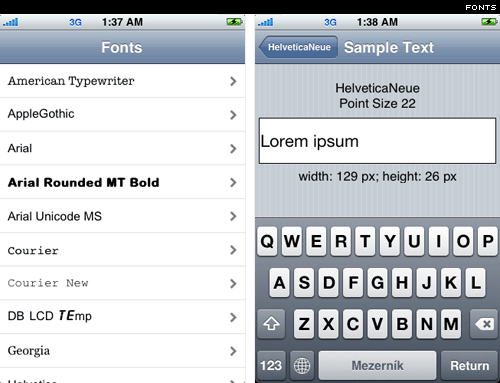 Knowing which fonts are installed on the iPhone will help with your font stacks. So, if you’ve chosen Lucida Grande, and wonder why it doesn’t display as Lucida Grande on the iPhone, then this app shows you why. [iTunes link]

FontShuffle from FontShop is aimed at helping you find typefaces. You can home in on a selction of faces by selecting from a number of categories and sub-categories (general to specific); e.g. serif > french > or sans serif > grotesque. It’s you pocket type catalogue: 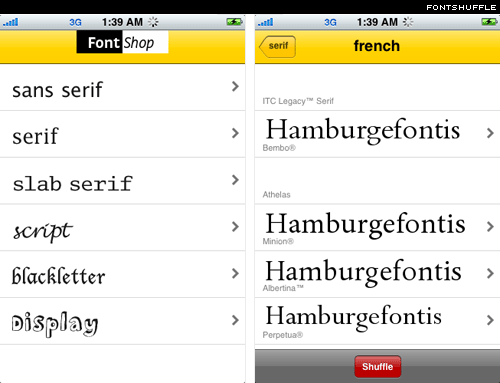 It was recently updated with 50% more fonts. Again, it’s a free app. I think it could be educational too — in teaching the basic type categories. [iTunes link]

The next is a fun little game by the name of Kern. Not easy to describe how this one works, so take a look at the Kern site for instructions. Basically you play at letter spacing. More fun than it sounds. 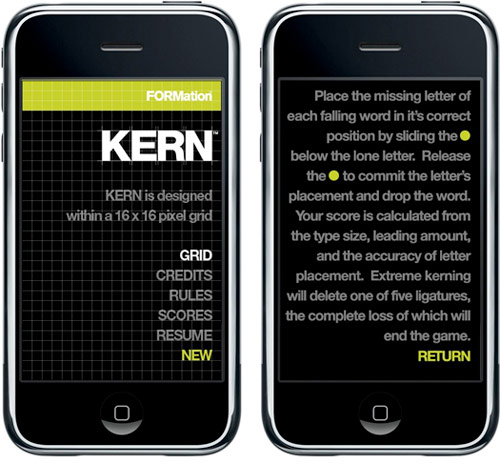 Another game, and one that can be quite addictive, is iLT’s own FontGame: 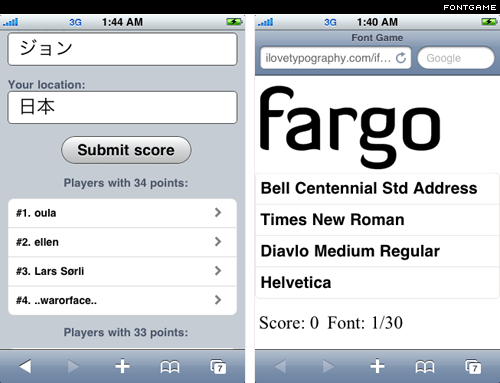 I’ll talk to the Kari, the maker of the FontGame, and see if we can develop it further. And of course you don’t need an iPhone to play this one. There’s also a regular (no pun intended) version of the FontGame.

Would be happy to hear your suggestions for improvements, or additions to the game.

I’ve heard many complaining that they don’t have access to accents (diacritics) on the iPhone. If you don’t already know, then you simply have to press and hold down the key, and you’ll see a list of alternates, like so: 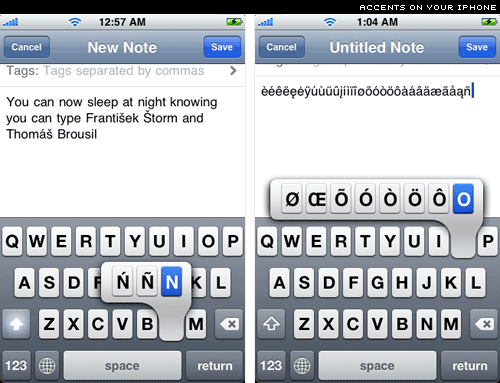 The standard US keyboard has quite a few accents, but if you want something like ý (y acute), as in Josef Týfa, then simply turn on the Czech keyboard: settings > general > international > keyboards.

ShinKanji isn’t for everyone, but if you’re interested in Japanese, then this is really useful. Includes handwriting recognition. Just draw the character (Kanji) with your finger, and it finds it in the extensive Japanese dictionary: 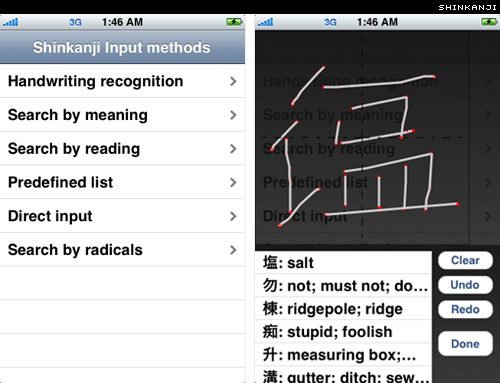 The Lite version is free. The standard ShinKanji, with an expanded dictionary and alternate input and search methods is $5.99 (much cheaper than an electronic dictionary). Might be worth consulting before you get that gorgeous Japanese tattoo. 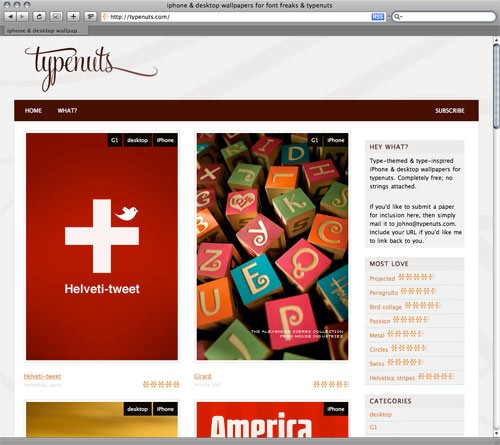 Even some for the G1 & BlackBerry. I promise to add more for those devices.

And the lovely poolga. Not all type-themed, but lovely, nonetheless: 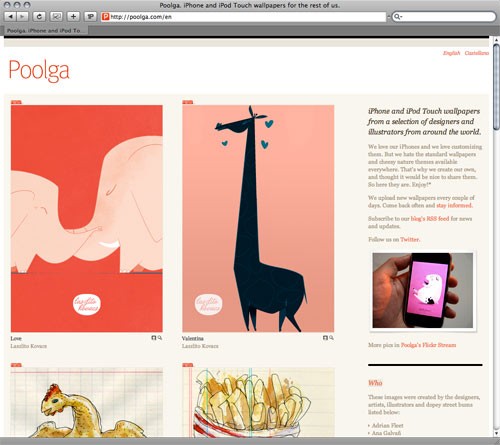 I wonder what’s next for the iPhone. Imagine a mobile version of FontStruct, or … well, I have some ideas too, so stay tuned. So, if you’re an iPhone developer and you’re interested in collaborating, then please mail me.

If you have your own type-related tips & resources for the iPhone or other mobile devices, then please share below. And, if you’ve used any of the above, let me know what you think.

My apologies to those who do not have or don’t want an iPhone.

I mentioned here that I’d be giving away some of these beautiful limited edition Helvetica Moleskines, produced by the Helvetica Project in Japan:

I have already given away three. I have another two to give away. The winners get to choose black or red. I paid full price, plus postage, so although I’d love to give them all away, I’m stretching it with five. Of course, if there are any philanthropic souls out there who’d like to donate some cash, then I’ll give away even more (and mention you, if you so desire). 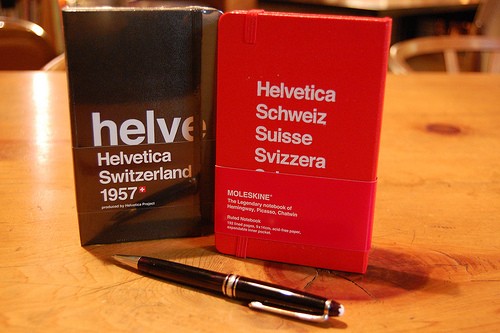 So, how to win one? I’ll give one away to someone in the comments below (might regret that); the other I’ll give to a random twitter user who tweets about iLT. It needn’t be a tweet about this competition. And you needn’t tweet multiple times. No prizes for driving twitter users crazy with iLT tweets! I’ll announce the winners within the next few days. Always difficult to know how to run these give-aways; if you have a better idea, then do let me know. 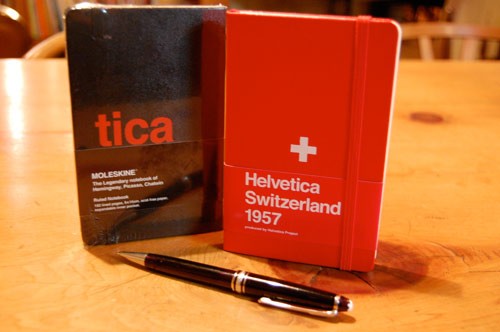 The remaining 10, I will sell. Not sure of the price (approx US$30 + postage). I’ll set up a shop with someone like bigCartel. Hope to have it live by Monday.

I will also have some limited edition handmade bags (made from sail cloth, and until now, not available outside of Japan): 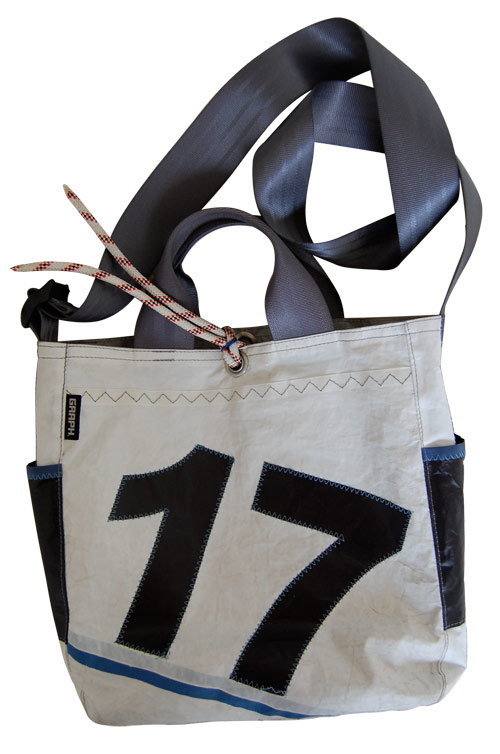 @justincraigen got a copy of the font management app, Suitcase Fusion 2. Courtesy of Extensis. Winner of the Bolda Display font give-away is @chergaoui. I used twitRand to choose the winner (and did some quick checks for multiple accounts).

A monster-sized the week in type, and a number of educational articles, including one all about the zero (promise it’s not as boring as it sounds); some more translations (German & Japanese) … oh, and that iPhone app, and lots more.

Have a great week, and thanks for reading.