The move to my new host, Fused Network, went very smoothly. As iLT has been expanding pretty rapidly, a server with a little more oomph was required. If you’re looking for great hosting and fantastic support, then try Fused. David, the main man at Fused is something of a server superstar.

Chelsea Darling was the winner of my first twitter-type prize. Chelsea won a copy of Simon Loxley’s The Secret History of Letters. I’ve decided to do this every week. So, from now on, I’ll pick a random follower and send you some type-related goodies. And, no, Chelsea Darling is not a character from AbFab — it’s her real name.

OK, let’s kick off this week’s the week in type with something I really need. The Helvetica Moleskine:

Great little video from RocketBoom, in which Vincent Connare, creator of Comic Sans (by no means his only achievement), talks about the ubiquitous hand-drawn type:

House kindly let me use one of their photos to create an iPhone wallpaper which you can download over at TypeNuts.

Nice idea for a Flickr Group, Book of the Week, where you’re invited to create your own book cover — based on an existing cover:

Take a photo of some type or lettering with your iPhone, and upload to Huge Type: 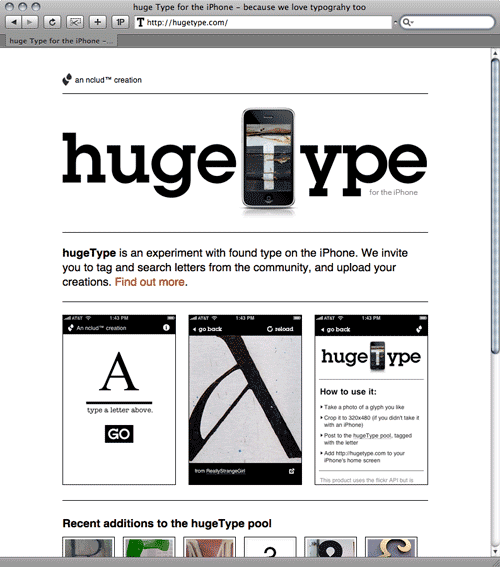 Business cards from Studio on Fire: 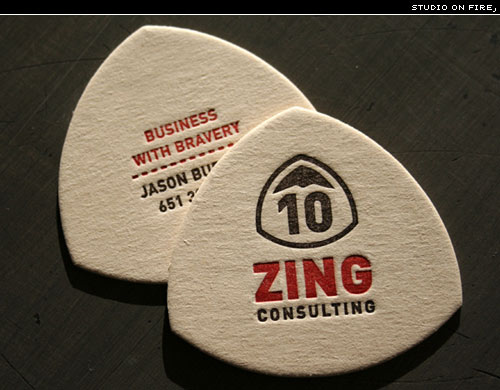 You’ll need to sign up to download them, but it’s free to do so. Let me know if you make use of them.

Lavoisier, the free and Open Source font I mentioned in last week’s the week in type has been updated to include support for Cyrillic.

First, the surprise release of Skolar. Had expected a much later release date, but it’s available from TypeTogether from today. Skolar is the type used for iLT’s default masthead, and I’m a big fan:

David tells me the Bold Italic will be released in April. Be sure to take a look at the new Skolar PDF specimen too. 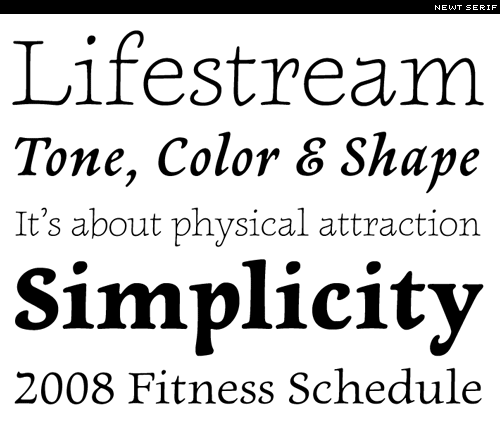 Not sure how to describe this one. It doesn’t easily fit into existing categories. It has a hand drawn quality about it, though it’s a seriffed face. I don’t have a license for this one, so haven’t had chance to play with it. Anyway, I think I like it. What do you think?

A limited character set; only lowercase a-z, but comes in Regular and Outline. I’d like to use this on a poster.

The League of Moveable Type intends to create a repository of Open Source fonts: 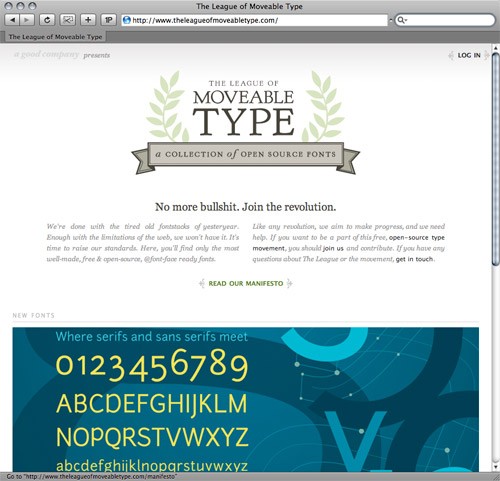 This could really become a great resource for typographic posters. Mentioned in passing a while back, but has been updated since:

This Sagmeister is one of my favourites: 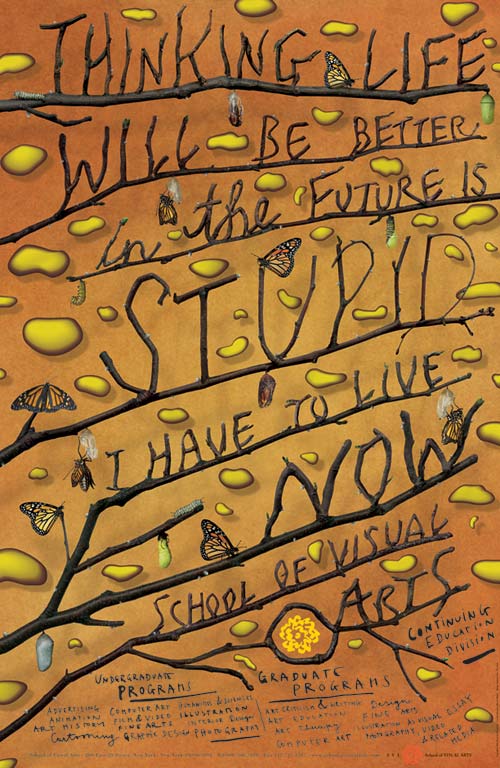 Love this poster by Spin from the recent We are Tokyo exhibition: 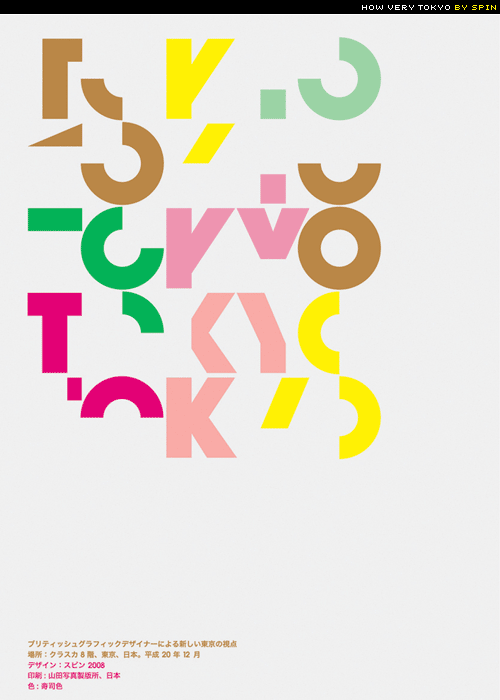 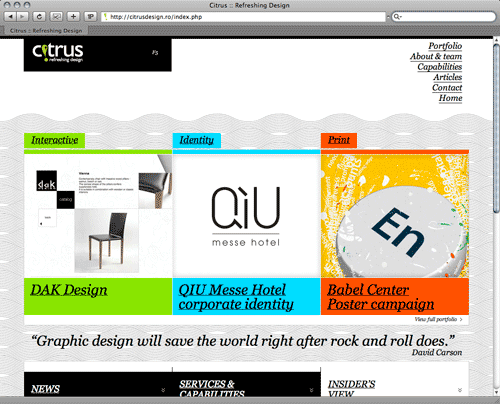 I lost faith in the Tooth Fairy after getting just 10 pence under my pillow. And that wasn’t during a recession. However, for those less cynical, how about the letterpress Tooth Fairy kit:

Looking forward to the publication of Oded Ezer’s The Typographer’s Guide to the Galaxy: 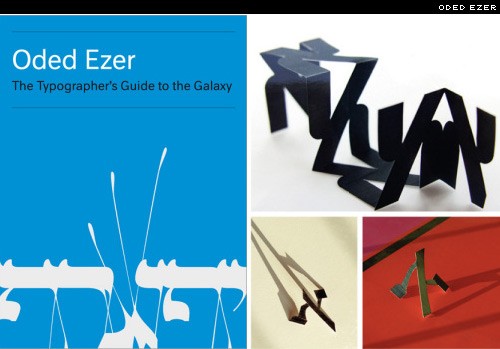 Another resource for typographic imagery, the new image tagging imgspark. Take a look at the typography tag:

Can’t believe I haven’t featured this site on iLT before. if you haven’t already seen it:

Some lovely photos from the Musée de l’imprimerie in Lyon.

Love this kind of experimentation with letterforms:

I’ve offered a number of give-aways in the past, and I’ve often done so through the comments; leave a comment, and I pick one at random. Once that led to some 300 comments. In future I’ll give away things via twitter (unless someone has a better idea). I have absolutely no problem with you ‘unfollowing’ me after the give-away; it’s just an easy way for me to pick a winner.

prize 1
a license for Bolda Display mentioned above. What do you need to do to be in with a chance of winning? Well, if you’re already following me on twitter, then nothing. I’ll pick a winner at random from my twitter friends within the next few days.

prize 2
a copy of Suitcase Fusion 2 for Mac OS X, from Extensis: 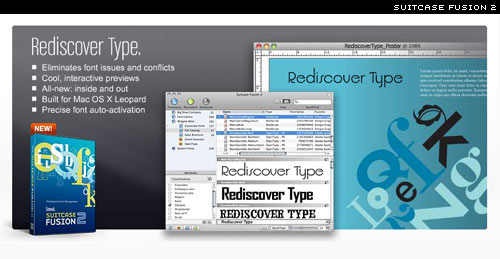 In the meantime you can download a free 30-day trial. If you’d like to be included in the draw for this one (remember the app is for Mac OS X only), then simply let me know on twitter. Add #ilovetype so I can find it. Thanks to Extensis for donating this prize.

There will be prizes every week from now on. Next week will be a book or some fonts. If you’re already following me, then you’re automatically entered into the weekly draw. Spread the word. And, If you’re in a position to offer prizes, then let me know.

Hope that at least some of the above inspired you. Wherever you are, and whatever you’re doing, have a great week.