The globalization of the type market and rising interest in multilingual typeface design is a source of great optimism among many typographers. Yet despite the proliferation of these beautiful new typefaces, many still do not support some European languages, let alone cater for African and Asian languages. In fact, contrary to the claims of advertisements, the offering is, in respect to language support, quite limited.

The aim of this article is to explain the fundamentals behind the use and design of Latin diacritical marks (accents) and help typographers make informed choices regarding their use. Design considerations are illustrated mostly with Central-European diacritics for the following reasons: a) they are generally less familiar to Western typographers. To quote Czech type designer Tomáš Brousil: “For Western typographers our accents are as strange as, for example, the Arabic script.” That they are seen as merely an add-on to the familiar Latin alphabet often leads to severely underestimating their importance; b) they are fairly familiar to the author; c) Central European, and the Czech language in particular, made one of the earliest uses of diacritics with Latin script (the substitution of diacritics for the use of digraphs was proposed by Jan Hus in his De Ortographia Bohemica in 1412).

For some time, floating or connected marks assigned to characters have been used in numerous writing systems, and have various purposes. Greek uses them to express tonality (so-called polytonic Greek), Arabic and Hebrew use them, optionally, to annotate vowels. In some of the Indian syllabic writing systems the marks represent alteration of the syllable sound (e.g. modifying the inherent vowel component). 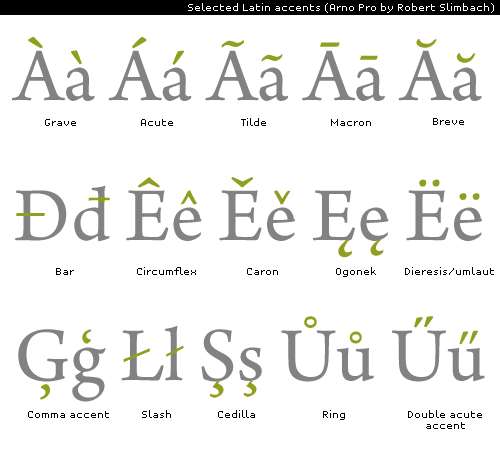 Diacritics are clearly not the only way to extend the writing system. New characters can be added (e.g. German ß) or clusters of letters (digraphs, trigraphs) can be used to represent specific sounds (as in Welsh, for example).

Nowadays, most of European languages make use of diacritics (for a nice overview see FontShop’s “Beyond ASCII” poster). Latin script was also extended for writing many African languages and Vietnamese. Various accents are used for transliteration of non-Latin scripts-languages to Latin (e.g. the pinyin system for Chinese). The International phonetic alphabet (IPA) is yet another extension of Latin.

It is often (but not always) the case that accented letters are equal citizens of vernacular alphabets. In Danish, for example, the alphabet goes “a–z, æ, ø, å”. The accented characters are compound, comprising character plus accent. Diacritical marks are therefore inherent parts of characters as much as stems or bowls. Even though accents are often detached from the basic letterforms, it does not mean they are any less important, or that they belong to punctuation.

The latter is a very common misconception and deserves some clarification. Punctuation is a tool to divide and structure sentences. Its style can differ (and it often does, in order to deliver the requisite distinction) from the stylistic principles of the letters. On the contrary, accents should form a harmonious whole with the letter-shapes they accompany, as they are intended to make consistent word-shapes to communicate meaning and/or word sounds.

This is nicely illustrated with the alternative caron. In Czech and Slovak, the caron has a special vertical form used on tall characters (ď, ť, ľ, Ľ). Its introduction was no doubt a solution to the limited vertical space available on the body of a piece of metal type. The regular caron (ě, š, č, ň, …) could not fit above the taller characters, therefore the vertical form was placed adjacent to the basic letter-shape. It is often mistakenly referred to as an “apostrophe-like accent”. But the alternative caron has nothing to do with the apostrophe! In fact, their similarity can be very confusing. The Czech word rozhoď (d with caron at the end) is the imperative form of “[do] scatter”. The word rozhod’ (apostrophe at the end), on the other hand, means “[he has] decided” in informal spelling commonly used in the literature. The possibility of text misinterpretation lead designers to come up with various ways of differentiating the caron from the apostrophe. The solution suggested by contemporary designers is based on a tight incorporation of the accents with the letters (see Peter Biľak’s Greta or some typefaces by František Štorm). The accent has a simple vertical wedge shape, whereas the apostrophe is larger and retains its typical comma-like form. Thus, the distinction between letters and punctuation remains clear.

There have been various issues with encoding non-Western characters since the early days of computers, and people became accustomed to writing emails and other ephemeral electronic communications without accents. This does not mean that the accents could be omitted in contemporary designs. They are still essential in transmitting meaning precisely, and in aiding readability.

The problem with diacritics is how to judge the quality of their design if one is not an experienced reader of a particular language (note that the expectations on the same diacritics may differ depending on the language or geographic area). Some of the biggest type foundries, to this day, employ the very same set of accents for many of the typefaces they produce. This dubious cookie-cutter approach makes for unreliable designs and generally makes things even more confusing. On the other hand, there exists a tradition of good accent design. Such accents have better readability and aesthetic value for the native reader. The following points together with further references should help designers to recognise satisfactory diacritic designs: 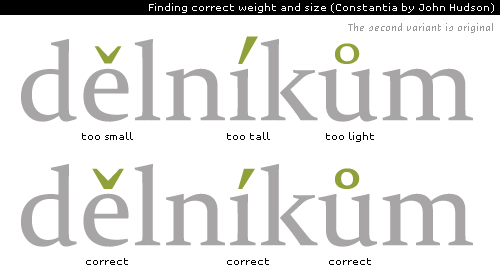 As mentioned above, accents are word-builders. Therefore, they should not stand out from the texture by being either lighter or darker than the letters they accompany. Furthermore, letters with and without accents are semantically equally important, hence the importance of accents should not be undermined by their insufficient size. This becomes even more important at smaller sizes, e.g. around 10–12 points. Type designers tend to judge their accents at big sizes, only to discover (or not) that at text sizes, the accents are underdeveloped and illegible. The smaller the text the bigger and more articulated the accent should be in relation to the basic letter-shape.

The position of the accent is crucial in order that the correct accent is attributed to the right letter while reading. Many of the accents are visually centered above or below letters. However, there are exceptions where the accent needs to be positioned to the right side of the letter (ogonek in letters -a,e,u- for example) or next to the letter (the aforementioned alternative caron). Proper positioning and proximity of the accents is crucial, but can prove difficult to achieve. The approach differs from display to text sizes and from regular to italic. And indeed, there are different approaches to positioning amongst designers. The general rule of thumb might be that the accents should not fall off the base letters — neither to the right nor to the left — when centered. Neither should they appear to belong to adjacent letters.

3. stylistic harmony
Weight and placement definitely have greater influence on readability than stylistic harmony. Nevertheless, stylistic harmonization should never be underestimated. Particularly, when it comes to contrast distribution in the accents. Type designers often “overdo” the application of the “characters’ style” applying the very same contrast and stress axis to the diacritics. The diacritics are not small letters, hence the contrast in accents such as acute, grave or caron may be very dissimilar to the contrast within the base letterforms.

In order to achieve better legibility and articulated shapes, designers often use so-called symmetrical accents for their text typefaces (see figure below) thus achieving a very good compromise between stylistic unity and readability. The stress axis in these accents varies, for the main goal is to produce symmetrical shapes. The design and placement of asymmetrical accents have proven difficult to master. Such accents work well mostly in typefaces based on broad-nib pen calligraphy (for a nice mid-way solution see one of the previous figures with Arno by Robert Slimbach; the capital accents are symmetrical — with breve being the odd one out — where the lowercase accents are more influenced by calligraphy).

It is recommended to reduce the contrast between thicks and thins as accents are proportionally smaller, and the thin parts tend to become fragile. Some other principles worth mentioning: the style of the simple endings should be the same as in the letter-shapes. More elaborate terminals (such as serifs, bulbous terminals, &c.) usually have no place in the accents. When the typeface employs open counters, the accents (cedilla, ogonek) should likewise have open counters (wide apertures). Of course, the stroke modulation should be as similar as possible.

As there is limited space above the capitals, special uppercase accents need to be used. These are smaller and shallower and better complement the capitals. Some designers also create special accents for use with small caps. This is especially advisable in cases where the style of caps (and small caps) and lowercase differ significantly; otherwise, lowercase accents can be applied without any problem.

Last, but not least, styling of the accents should not make them too similar to each other. Too shallow an acute may be mistaken for a macron; too rounded a caron mistaken for a breve. For the sake of legibility, the design of diacritics should not stray too far from their standard, accepted forms.

4. fitting/kerning
Diacritics should not collide and produce illegible shapes. For that reason, careful fitting and kerning is required. No type designer can foresee every possible diacritical combination, so typographers are strongly advised to apply their own judgement and taste. 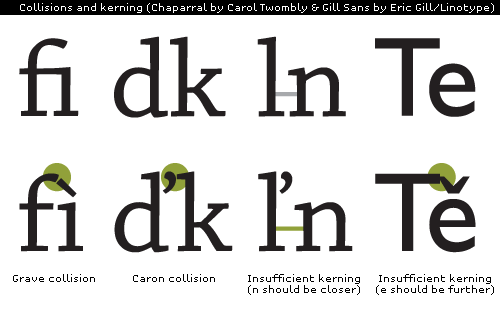 The broad topic of diacritics is clearly beyond the scope of this general introduction, but it should be evident by now that diacritics are not merely an add-on to the basic letters. They make letters.

The views presented here focus primarily on text typefaces, where the demands, for obvious reasons, are higher. Careful research and sensitivity to their utility and aesthetic should help typographers to choose typefaces with well-designed diacritics (or at least recognize their shortcomings), thus improving the quality of many a vernacular text.

David Březina is a type designer and typographer with a computer science background. His interests lie in non-Latin type design and typography of multilingual and complex texts. He graduated with distinction from the MA in Typeface Design at the University of Reading (UK), and has since been working with Tiro Typeworks. He occasionally publishes in Typo magazine. David is currently fighting with the upright omega of his soon-to-be-released typeface Skolar.