A year ago, after the ten of us settled in The Hague, we started the Type and Media masters course—excited to begin our education in type design. Expecting to immediately start drawing letters, we were surprised to find that our first course was in Python programming. Though unexpected, it was an appropriate way to begin the semester, as we quickly learned that in type design you need to understand a wide range of different tools, adapting to and preferably making them your own. Understanding as many tools as possible gives one that added flexibility.

Over the course of the first semester each week was filled with a variety of physical and mental exercises, using tools which spanned the analogue and digital realm: from the swing of a hammer to the click of a mouse.

The week began on Monday with Just van Rossum, who taught us Python through an educational program he developed called Drawbot. This application visualizes the Python language, and was a good way for us to understand the abstract nature of programming through a concrete, aesthetic representation of it on screen. The fundamentals learned from Drawbot later helped us to understand the logic of scripting in FontLab.

Tuesday morning was spent with Paul van der Laan, in which we were given an assignment to revive a past typeface. We first chose a book printed before 1950, and after identifying its typeface began the process of creating a digital revival of it. Since most of us had very little past experience with type design, it was a valuable exercise to acquaint ourselves with part of the process, using an existing typeface as a starting point. In the afternoon we had stone carving lessons with Françoise Berserik.

Through our weekly practice of carving a single letter to eventually a full word, we’d become the loudest band in school. Later in the semester, during a tea and typography afternoon at her studio, Françoise showed her work in book design. She also gave us a lettering tour in The Hague, followed by ice cream.

Wednesday was the most theoretical day of the week, with Gerard Unger in the morning and Peter Biľak in the afternoon. Gerard lectured about topics between type and graphic design. We met at both the Royal Library in The Hague and the University Library in Leiden for his lectures, and were presented supplementary printed samples. Peter Biľak gave exercises dealing with the design and logic behind multiple scripts, lectured about theoretical aspects of design, and discussed various ways of thinking. Every other Wednesday evening was shared with Petr van Blokland. We had coffee, tea and biscuits at his studio in Delft as he spoke about the design process, programming, as well as tips and guidance in starting your own studio, to name a few. 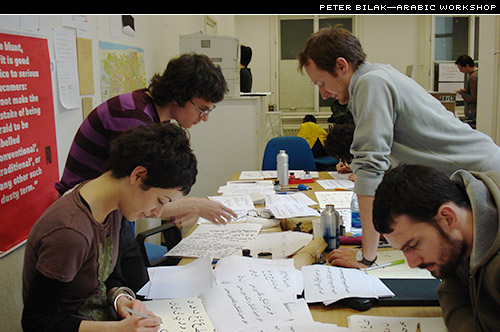 On Thursday morning Petr’s brother would take over. Erik van Blokland subscribes to Make magazine, which isn’t surprising, as he can explain how practically anything works. He would bring many printed books and treasures for a weekly show-and-tell. He gave demonstrations of two programs he developed with Just van Rossum and Tal Leming: Superpolator and Robofab; plus the font data storage format of a .ufo. Other programs included Feature Proof, Metrics Machine and Prepolator. He also taught us drawing, using TypeCooker a tool for generating type-drawing exercises, sketching methods and the basics of the pointed pen. From one stroke contrast to the other, Peter Verheul would teach the afternoon class, explaining the broad nib pen as well as contrast and weight modulation. The Thursday team also coordinated the class to make chocolate letters for an exhibition shortly before Christmas.

On Friday we had the ability to sit in on undergraduate classes taught by Frank Blokland, dealing with the basics of letterform construction and design. Being all graduates who’ve studied at different schools, it was impressive to see the amount of letterform training undergraduates received in only their first year. A number of the current tutors — Frank Blokland, Erik van Blokland, Petr van Blokland, Just van Rossum, Peter Verheul — were taught by Gerrit Noordzij and they all continue teaching his theories from a personal perspective. Jan Willem Stas, the course supervisor, taught the afternoon by showing us his country through visits to Rotterdam and Amsterdam, and made sure that everyone felt at home.

The second semester was mainly devoted to our final project, receiving weekly feedback from Erik van Blokland, Paul van der Laan, Peter Verheul, and with semi-weekly instruction from Christoph Noordzij. Lectures were also given by Petr van Blokland and Fred Smeijers every other week. Miguel Sousa from Adobe gave us a FDK one week workshop and later we had James Mosley visiting to share his knowledge of English Vernacular Type, Didot and the Low Countries. Frank Blokland came to the class to give a demonstration of FontMaster, and how DTL handles its library.

Breaks throughout the course came in the form of various trips outside and within The Hague. A visit to Enschedé in Haarlem, the Meermanno in The Hague, the special collections of the Amsterdam University library, the Stedelijk Museum in Amsterdam, the Plantin Moretus Museum and the Integrated conference in Antwerp, and lectures in Leiden by the PhD students of Gerard Unger. The ultimate distraction, a week in Berlin including Typo Berlin, came two weeks before our final presentation. There was also the yearlong distraction of an ongoing fussball tournament between countries.

Since Gerard Unger also teaches at Reading, and their class was visiting Holland, we were able to enjoy meeting each other over lunch and show some of our work. We were also lucky to have visitors from China and France, as well as Naima Ben Ayed, an exchange student from Ecole Estienne in Paris.

To celebrate our graduation and our friendships we decided to design a collective poster. The poster was printed by Jan de Jong, a passionate printer and publisher we visited during a class trip to Amsterdam. Though we’re proud of what we were able to accomplish over the past year, we’re excited in the knowledge that this is just the beginning, with many years of learning and practice ahead of us. Not everyone will end up being full time type designers, so it will be interesting to see how we manage to incorporate this passion into our chosen professions.

Extreme moments in life grab attention, demand reflection, and are remembered. What one person finds extreme another may not, but there are many things in the world that people agree are extreme. Extremes are interesting, and was a good place to start my design research!

Kina is a type family designed for magazines, packaging and general graphic use. Coming soon: the complete three weights in Italic.

Pomme is a text typeface originally inspired by the proportions of newspaper typefaces such as Corona, Ionic, Excelsior, Times New Roman and Swift. Pomme is identifiable by its round curves, open counters, wedge serifs, and short ascenders and descenders (for setting with minimal leading). The final result is a typeface suited for use in magazines.

As a first try, I wanted a simple ‘typotoolbox’ with only a few cuts and substantial differences between them. The initial family tree contained four cuts: Text, Italic, Bold & Display (later dropped owing to time constraints). Nelly, as a small type family, also explores the boundaries of unity.

Happy shapes and peaceful colours in order to spread the word and save the planet! Not more, not less ;-D

Alda explores how a typeface’s weight may be represented beyond the width of a stroke. By changing details speciﬁc to each weight, my intention was to emphasize each weight’s inherent characteristics, where the bold is robust and sturdy, and the light is delicate and soft. As letterforms reduce, so do these differences in detail, allowing Alda to function as a family at smaller sizes. The goal of this process was to produce a typeface family that is cohesive in appearance under smaller conditions, yet very expressive at large sizes through its variation in weight and character.

An (upright) italic decorative display typeface with a few different styles: a regular version, a continuing script version, a stencil version and an illustrative version based on the regular version. The typeface is funky and quite bold, it has swing and short ascenders and descenders. The idea was in the first place to make a typeface for use in my own graphic design. It had to fit my illustrations, which are simple lined and absurd: tortured and dead animals, naked people and happiness in general. It is for posters, book covers, kebab restaurant windows and t-shirts.

Dendra is a typeface born from the simple wish to have a legible text typeface. It was designed to work for setting catalogues or similar text based stuff that needs hanging and lining figures with some small caps and other useful opentype features. To proof its usability it was tested in running texts from sizes 6 to 14 points. But the idea was to make it interesting enough to be used for headlines around 36 points as well. As a special OpenType feature it contains a set of tree silhouettes.

Vasinto was born in a small town in the middle of Italy in 1909. His parents, working as enlighted farmers, named him in honour of the first President of the United States, George Washington. Owing to their poor knowledge of English, the name was literally translated to the Italian Vasinto. Vasinto is also a contemporary typeface.

Pocket is a bookish type family.

About the Academy,the course, and students. TypeMedia.