Last week we led with a beautiful found type photo from David John Earls. This week we lead with another stunning photo from Adam Polselli. It just happens to be one of my favourite cars too. Anyone have a spare one languishing in their garage?

Parachute Fonts has built a great library of type, so it’s no surprise that they should start picking up some silverware. Parachute’s Centro Pro super-family was awarded best original typeface. How about this for a trophy:

Congratulations to Parachute and to Centro Pro’s designer Panos Vassiliou. It’s a beautiful family. Be sure to check out Parachute’s Flickr too:

For type fans who are also Poker fans (me), then how could you live without P22’s second edition of the hugely popular type-inspired playing cards.

Every card features a different font. $10 or free if you spend over $100. Thanks to Diane Zerr.

Click on the big G to see a list of fonts from Megi Zumstein & Claudio Barandun. Via swissmiss.

A tag-cloud or word-cloud generator from Jonathan Feinberg with numerous options to play around with:

FontBooklet One from FontShop is a rather nice looking specimen. Includes FF Maiola, Whitman, FF MetaSerif, and friends.

PSDTuts had another great tutorial demonstrating how to achieve that glowing text effect. Lauren, over at Creative Curio turned the whole process into a PhotoShop Action that you can download and play with.

Dream Type—make your own message

Excerpts from Finer Points in the Spacing & Arrangement of Type

An Alphabet Of Chairs

Arial, the most legible ‘font’ in the world—haha

The beautiful Symphony in Red:

Next, a lovely marriage of poetry and experimental typography from poet Derek Beaulieu:

The above illustrations are from Chains, published by Paper Kite Press.

With chains, derek beaulieu once again turns his attention to how “language regards itself, stalks itself, begins, slowly, to eat itself” (Canadian Literature) in a series of graceful abstractions made entirely from antiquated dry-transfer lettering. In chains, letters gather in elegant arrangements, architectural constructions and sinews of meaning.

Would love to see some screen-printed posters of Derek’s work.

I mentioned Daily Type a while back. Here’s a reminder.

And for Russian readers, there’s typoholic.ru, the brainchild of Valery Golyzhenkov and Ilya Ruderman (Ilya is one of the founders of Daily Type). And Ilya’s Flickr is here.

Some very interesting experiments with letter forms from Christine Cerniglia, while taking one of Kristy Pennino‘s classes:

and this example from a former student in the same class:

Does anyone out there know Kristy Pennino? She certainly sounds very interesting.

I guess it’s not quite the time of year for it, but here’s something you might want to buy for this coming winter: 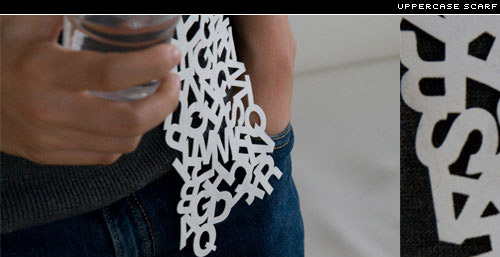 Laser-cut scarf in microfiber suede from littlefactory.com. Via typographer.org. And if you need yet another type-themed t-shirt to match your scarf (or the other way round), then be sure to enter Typophile’s t-shirt competition.

This entry from Andrea Emery, and set in FF Meta made me smile.

I mentioned Milton Glaser’s I Love NY logo in the fifth instalment of my Type History series. Found this nice little interview with the great man here.

Be sure to check out his Flickr Photo Stream too.

I would have included a link to the Sancho BBDO agency, but it resizes the browser window and throws popups all over the place—pity. Thanks, Vivien.

A bit of fun from the Ink Finger Store—the Baseline Ladies, including Sister Baskerville and Ms Helvetica Neue.

Designs by Matt Sutter. Thanks to Peter van Impelen.

Today’s Type Tip is from Bringhurst’s The Elements of Typographic Style, where he suggests using the roman or upright version of parentheses and square brackets, even if the text itself is set in italic.

In my own experience this has proven a good general rule. However, it is typeface-dependent. Some types come with parentheses and square brackets that slope less than the italic letters, and sometimes just look better than the roman or upright versions. If you do choose to follow this type tip, then you’ll often find that you’ll need to tighten up the spacing between the upright bracket or parenthesis and the letter that follows it (the parts highlighted in red above). For the Web, the above practice may create more problems than it solves. Try it—which one looks best?

Thanks to the dozens who sent in their solutions to iLT’s second crossword competition. I think this one was pretty difficult, so in future I’ll try to set an alternative concise version. Of all the correct entries, Zacahry (Zacahry who? I don’t know) was drawn at random and wins a license for Stefan Hattenbach‘s rather lovely Anziano.

I did permit two possible solutions to 4-down—both border and margin were deemed correct solutions. And here’s a taste of the prize:

A big thanks to Stefan for offering this great prize.

An article on letterpress, an interview, and a piece about the making of a recently released font. Thanks for reading, and have a great week.

previous: A Brief History of Type—Part 5

next: Anivers — birth of a typeface