A Brief History of Type—Part 5

Welcome to the early 1800s and the birth of the Slab Serif, otherwise known as Egyptian, Square Serif, Mechanical or Mécanes. What’s with the name Egyptian? Upon Napoleon’s return from a three-year Egyptian expedition and publication in 1809 of Description de l’Égypt, Egypt was all the rage, and it appears that type founders simply used a term that was on everyone’s lips, a term that was in vogue. The nomenclature has absolutely nothing to do with Egyptian Hieroglyph Slab Serifs—because there’s no such thing.

Like the industrial revolution, the Slab Serif was born in Britain, and was no doubt inspired by a new wave of advertising, and those beefy letter forms that could be found on just about every billboard, pamphlet, and poster of the day. Until this time, type was designed to serve one purpose—it was designed for long stretches of texts, for books. But with mechanization, and major innovations in printing technology (e.g. the Steam Press, 1814), advertisers in particular were looking for a type that stood out from crowd; a type that shouted, look at me! Thus was born the the display face—type for use at large sizes, for short bursts of copy.

…there is sometimes a lack of understanding of the fundamental difference between types designed for display and types meant for text. The difference can be expressed as a maxim: text types when enlarged can be used for headings; display types, if reduced, cannot be used for text setting.—Walter Tracy**

Those posters were a riot of big type, often a half-dozen different styles on a single page. If the Didones are a lissome Audrey Hepburn, then the Slab Serifs are those guys one sees all too often on construction sites around the globe — trousers half-way down their posteriors. What I’m getting at is that the early Slab Serifs weren’t discreet. They were designed to be noticed.

The Slab Serif or Egyptian is also home to further subsets of typeface styles, like the Fat Faces which are fundamentally Didones (or Moderns) on steroids. Take a Modern style typeface, give its thicker strokes even more weight, triangulate some of those serifs, and you have a Fat Face. You might be familiar with types like Poster Bodoni. Bodoni is of course a Modern style type but, carrying all that extra weight, it’s a Fat Face. The Fat Face, then, is basically an Obese Didone.

If, as some commentators remarked, the Didones were parodies of Baskerville‘s types, then the Fat Face types are parodies of parodies. The first Fat Face was designed by Robert Thorne (c. 1800), who was also responsible for coining the term Egyptian to describe what is generally known today as the Slab Serif.* 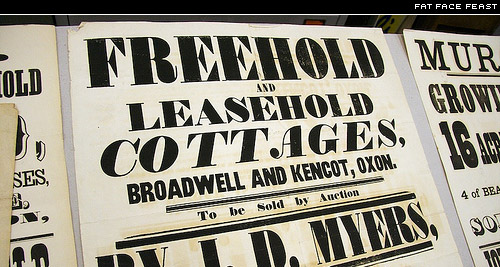 By the mid-1800s, another sub-set of the Slab Serif class of types began to emerge—the Clarendons. They were an attempt to reign in some of the extravagences of the Fat Face display types, making them fit for use as text faces. Contrast was reduced, the serifs thinned somewhat and up with the x-height for legibility at those smaller sizes.

Strictly speaking an ‘authentic’ slab serif has unbracketed serifs (an abrupt serif that meets the stem at a 90° angle), though there are numerous examples that come with bracketed serifs. Then, of course, come the Geometric Slab Serifs that look like the early Sans Serif types with the serifs broken off.

The Geometric is a twentieth-century riposte to the Antique. Informed by the same kind of rationalist thinking that inspired the great sans serifs of the Bauhaus, Geometrics abandon traditional forms in favor of mathematical strategies.—Jonathan Hoefler

There are thousands of slab serif types available today; some are simply digitised oldies; others are sans serifs and geometric sans serifs with slab serifs stuck on; others still, rise above the crowd and bring something fresh to this style of type.

Archer from H&FJ is perhaps one of the best slab serifs for setting extended text. It comes in numerous weights, has an excellent italic accompaniment, and just looks damn good. And, of course, the heavier weights and caps work beautifully for display.

One of my other favorite slab serifs is Erik Spiekermann’s Officina Serif, a very robust, very legible type that just doesn’t break—you could print it on toilet paper, and it would still look good (no, I haven’t tried). If you don’t have Officina Sans and Officina Serif in your type library (or you have a stolen version), then I strongly recommend you purchase a license—it’s a simple type that will never let you down.

Just about every typewriter face is a Slab Serif. There are hundreds to choose from, from Courier to ITC American Typewriter immortalized in Milton Glaser’s I ‘Heart’ New York logo. 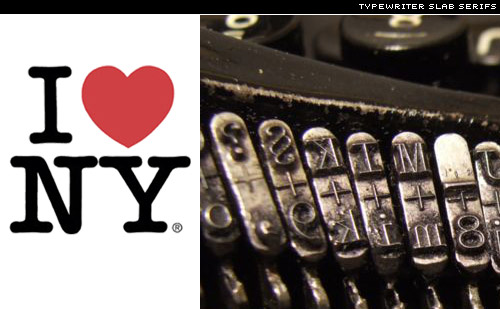 The heavy-weight, no-nonsense serifs of the typewriter types are well-suited to this particular form of printing, and perform well on even the poorest quality paper.

We’ve taken just a very brief look at the Slab Serif. Upon completion of this series, a more comprehensive version will be included in the free PDF.

So what do you think of the slab serif? Do you have your personal favorites? In part six of A Brief History of Type we move on to the Sans Serifs, so stay tuned.