Before I begin, I’d like to thank all those who helped me fix a problem with some of my posts not displaying. Special thanks to Travis and also to Michael over at WP Candy. And all on Twitter. If you haven’t used Twitter, then I recommend it.

Let’s get started with Brand Tags, a simple, great idea from Noah Brier. Look at the brand and enter the first word that comes into your head. The collective results are displayed as a tag cloud:

The tag cloud—the use of hierarchy in typography (but be careful with line-spacing). I wonder if you can name the brand from the above tag cloud? In fact there is a backward version of the ‘game’ here.

Next is something for fans of Blackletter. If you’re one, then you won’t want to live without this:

You can find out more on the FontBlog and here. Also a little information (in English) on Typophile. Via Vogelwarte (Twitter).

A wonderful little article by Jonathan Hoefler on the ampersand.

And while we’re on the topic, here’s my kind of plate:

Some nice work from experimenta in New Zealand:

An interesting series of 14 crypograms from Pentagram. Here’s number five:

And I love this Letraset collage from Able Parris:

There are some general standards for the design and placement of diacritical marks. The examples in this Flickr group are sometimes quite outlandish. For more on Diacritics see here.

David Earls has written a wonderful piece on Building type for under $300.

Above is a screen-grab from the Inkscape application. This is part one, so keep your eyes peeled for the next instalment. In fact, there are so many great articles from typographer.org, that I suggest you subscribe.

Great article on the making of Centro Pro. What started out as a relatively small project, turned into a super-family: 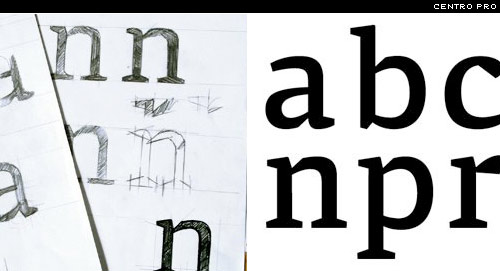 Hindi Rinny is a wonderful blog all about South Asian type and typography:

Spice up Your Rails with regexp—see ligatures section.

Cora Basic (free for a limited time, so hurry):

Remember to check the license that comes with the font.

A brief note on Kerning

There appears to be some confusion about what Kerning is. Oftentimes, people complain about text and remark, for example, that “the kerning there is awful”. I think it’s down to confusing Kerning with plain-old letter spacing. Kerning is concerned with the spacing between pairs of letters (not only letters, of course). So most often, if you see letters set a little tight or loose, then it’s more than likely the letter-spacing is the issue. Most good fonts are kerned well. However, no type designer can possibly kern every possible combination of glyphs, so in some instances (and when using type at large point-sizes), kerning may be the issue.

Sometimes poor letter-spacing can be attributed to “optical kerning”. In the Adobe suite of applications, one has the option to set text with optical or metrics kerning. The optical method pretty much ignores the kerning that’s built into the font (that determined by the type designer); metrics pulls the information about kerning from the font’s ‘kerning table’. So, most of the time it’s poor letter spacing, rather than poor kerning. Hope that helps. See also: iLT investigates Type Torture.

If you find your own examples of bad letter spacing, then why not post it to Joey’s Appalling Letter Spacing Flickr Group. You don’t usually need to look far. Your newspaper is a good place to start.

Last week I held a competition to identify the types used on the cover of Dot Font: talking about type. Two winners were chosen at random. They are Eben Keun and Jongseong Park. And the types used are all from Joshua Darden’s brilliant  Freight family.

This week I’ve composed a typography-theme crossword. The crossword is on this page (enter the solutions and click submit); there’s also an image of the crossword that you can download and print, solve, and mail to me—if you’re an analogue kind of person ;)

The prize is the wonderful Haptic typeface family worth $475. Click here to play.

An interview with a Swedish type designer, the final part in the eXtreme Type terms series, and too much more to list here.

Don’t forget to play The Rather Difficult Font Game. Wherever you are, and whatever you’re doing, have a wonderful week.