Welcome to ILT’s 100th post. Thanks to everyone who sent in questions and who read and commented on my interview with Jos Buivenga. Also, thanks to Jos for being such a good sport, and taking the time out of his busy schedule to answer our questions. I’ll be sure to keep you updated on the man from exljbris.

First, a rather nice combination—food and type. And what a name! I introduce to you (deep breath) the gastorotypographicalassemblage:

Thanks to Lauren for the link.

Sander over at segd is running a competition. For the chance to win a laser-etched name plate, worth over 150 Euros, just name this typeface:

Give Me an “A”! That’s It, Just an “A”!
Christoffer Hald, Grapic Design, Typography
The Brooklyn Bookbinder
34th Williams A. Dwiggins Lecture
Eurostile Next—Eurostile gets a facelift.
Excellent Book Covers and Paperbacks—SM

A wonderful documentary video from the BBC. Stephen Fry travels to France and Germany on the trail of Johannes Gutenberg, and sets about reconstructing a replica of Gutenberg first press. This is a must-see program. Owing to contractual restrictions, it’s not available outside of the UK; however, I see that it’s available on Youtube. More like this BBC, please. And more Stephen Fry.

Typeface of the Month

Seb Lester should have reason to celebrate. His new sans Soho Gothic is stunning. And with more weights than you can shake a stick at, it’s a very versatile beast indeed. From the elegant hairline to the sumptuous black italic (see this article’s masthead), it’s beautifully crafted.

Soho Gothic is a beautiful accompaniment to Seb’s slab serif Soho (9 weights and 5 widths!). If you’d like to have a little Soho Gothic on your desktop, then download iLT’s Soho Gothic wallpaper.

Some lovely work from The Brooklyn Bookbinder. Beautiful bookbinding and letterpress:

Kari’s Font Game has proven incredibly popular, so much so that at times his server is puffing clouds of smoke. Kari and I have been talking about moving the game over to iLT. The game will remain Kari’s baby, but we’ll have a page on iLT devoted to it. Nothing set in stone as we’re still testing it. I’ll keep you up-to-date. In the meantime, you can still play it here.

If you have ideas for new things you’d like to see on iLT, then let me know. I’d love to see more reader-contributed content. It is, after all, your site.

I’ve been reading the Linotype Matrix magazine. It’s brilliant. Great article from the likes of John D. Berry, Jan Middenthorp, and even an article on the history of Helvetica from Walter Greisner, the former CEO of Stempel AG. I especially enjoyed Claudio Rocha’s piece on the Plantin-Moretusmuseum. 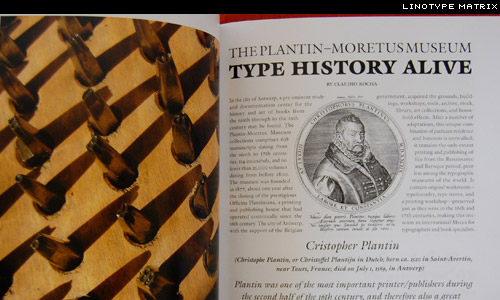 Linotype describes it as a typographical journal published from time to time. You can get copies from the Linotype web site. I’m surprised Linotype hasn’t made more of a fuss about this magazine. If you love type, you’ll love it. 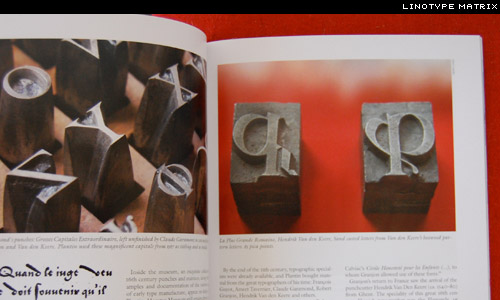 I wonder if there’s anyone reading this who’s old enough to remember the original Matrix by John and Rose Randle? I’ll ask Linotype about permission to republish the odd article from Matrix right here on iLT.

And the winner is…

Last Sunday I offered a copy of The Complete Manual of Typography to someone who could name the typeface used in the masthead, in addition to naming one other typeface designed by the same man.

The answer of course is Template Gothic (bold) designed by Barry Deck. Arbirary is another typeface designed by Mr Deck. Anyone old enough to remember Emigre magazine, would most likely have recognised the typeface immediately. Out of 136 correct entries (thank you), Ricky Irvine’s name came out of the hat. A copy of the book is on its way. Ricky has a great web site called Dressed in Value.

However, of all the competition entries, my favorite was from a young lady who practically wrote a novella outlining her search for the name behind the typeface. Ultimately her answer (Le Monde Livre) was wrong because she was attempting to name the typeface used in the default header (on the home page). I’m tempted to send a consolation prize. Well, as it’s ILT’s 100th post, then I’ll send her a copy of Ellen Lupton’s Thinking With Type—if you’re reading this, then please claim your prize.

Next Sunday, I’ll run another competition, so keep your eyes peeled.

I’d like to say a big thank you to everyone who’s working hard translating iLT articles. I’m a little behind in posting them to the site, but they’re coming soon. If you’re interested in translating articles for ILT, then do let me know before you begin work, so that you don’t duplicate.

An interview with Nadine Chahine, an article from Sander Baumann on type in use, and much, much more. Oh, and iLT has given birth. A mini-site is in production. I hope to launch it next Sunday. And if you haven’t already guessed, yes, it’s all about type.

Have a great week!

previous: An Interview With Jos Buivenga