Small caps are uppercase glyphs drawn at a lowercase scale. A common misconception—unfortunately reinforced by most word processing programs as well as by CSS on the web—is that a small cap is just a regular capital letter scaled uniformly down to a smaller size. In actuality, a proper small cap is a carefully crafted glyph that differs in significant ways from a uniformly-scaled-down capital letter.

Obviously, since the height of the small cap m is about as tall as the x-height of a regular Minion Pro lowercase m, a small cap m at any given point size is significantly smaller than an upper case or regular cap M at the same point size:

When we scale the small cap m up to be the same height as a 381pt M, it’s 534pt; and in this case we can clearly see the differences between the two glyphs. The small cap version is, for one thing, wider than its capital counterpart, and its serifs are, for another thing, taller. 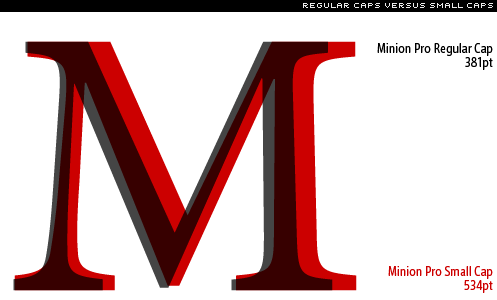 Why is the small cap “m” proportionately wider and bolder? A picture is worth a thousand words: 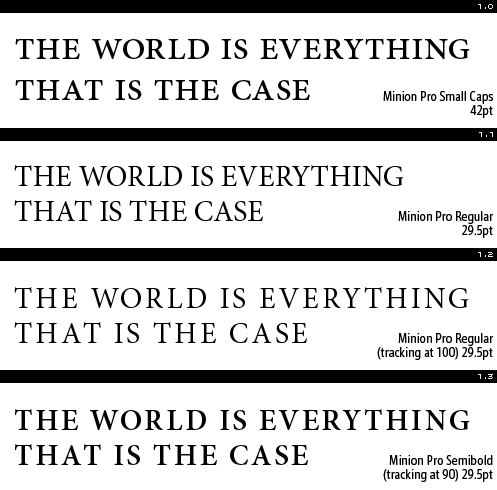 What we’re used to

The algorithms for generating small caps in most desktop programs is both simple and woefully inadequate. Look at what Microsoft Word does when it generates ‘small caps’ in a font (Times New Roman) that doesn’t come with its own small caps:

First of all, note that, compared to our Minion Pro example, the Times fake small cap m is too tall. But the more heinous crime is that the fake small cap m is literally just a small capital. When we scale the ‘small cap’ to be the same height as the regular capital, we can see this clearly—note the position of the lines in the graphic below: 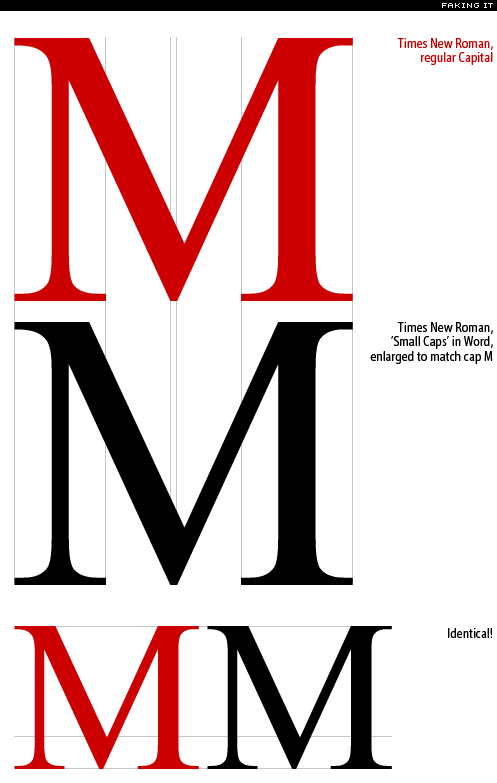 And the same thing happens in your browser. Unfortunately most so-called web-safe fonts don’t have small caps and, even if they did, it appears that CSSs font-variant: small-caps simply ignores them and rescales the regular cap; and yet The World Wide Web Consortium (W3C) states,

Well, it doesn’t appear to work.

Here’s a random page from a David Hume book, via Google Books:

Uses of small caps are circled in red.

What are they good for?

As you can see, small caps are an important part of your typographical arsenal—most commonly, they are used for acronyms, but they can also be used for setting page headers, in captions and legends, or for abbreviations, acronyms and definitions in your body text—but if you’re going to use them, do it right: buy fonts that have small caps in them, and use them in a decent page layout program that respects them.

Anziano designed by Stefan Hattenbach is a relatively new type that has an excellent set of small caps.

[Alec Julien, a regular contributor to iLT, is a web developer and amateur typographer, living in Vermont, US. He dreams of someday living somewhere warm, and typesetting a novel.]