Warning: readers may find some of the images in this article disturbing.

It was 2am when the call came in over the radio. Italic rain lashed down against the wind shield, liquefying the neon sign’s reflection. Clarendon looks good in Neon, but perhaps…

The radio interrupted my thoughts, bearing a voice that had woven itself through distant thunder…

“We’ve got a BK over on Lucida Avenue, opposite the Emigre Foundry. This one’s ugly, real ugly….”

By the time I arrived at the crime scene, the rain had subsided. I’d been on the force 25 years, but nothing had quite prepared me for this:

A week later, after an anonymous tip off, we brought in a guy for questioning. David Terrence Paine had a string of previous convictions. He was one sick puppy; got his kicks out of this kind of thing.

Yes, “BK” or Bad Kerning can be found everywhere. But before we get into bad kerning, let’s remind ourselves of what kerning is.

Sometimes there appears to be some confusion over what kerning actually is; it’s sometimes confused with tracking. So this is what kerning is:

Kerning refers to the spacing between pairs of characters or glyphs.

So, for example “A v”: the upper-case “A” is bottom-heavy, while the lower-case “v” is top-heavy; kerning can be used to reduce the space between this letter combination to make it look better and to improve readability.

Kerning should not be confused with tracking which is about the letter-spacing between a series of characters in a line, paragraph, or block of text.

In tech-speak, Kerning is “pair-wise adjustment of horizontal glyph metrics.”

For those of you interested in the etymology of the word “kern”, there’s an interesting discussion over at Typophile on the subject — it starts out as a discussion about parallels between kerning and life; but if you scroll down, you’ll learn something of the origins of “kerning”.

In the screen shot below you can see some of the kerning pairs on the right (this screen shot is taken from FontLab Pro, one of the applications you can use to design type): 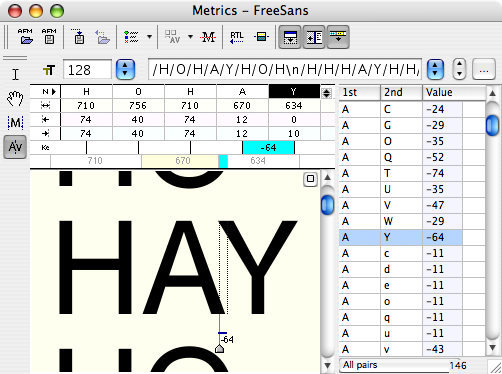 Note that for the “AY” pair — highlighted in blue — the value is much lower (-64) than, say, for the “Ac” pair; because basically the “A” is bottom-heavy, while the “Y” is top-heavy, so they need to be brought closer together.

Well, we could talk all week about kerning, but we’ll save it for another day (“the excitement is killing me”, I hear you say). In fact you never have to look far for examples of poor letter spacing. This is from today’s National Newspaper:

Can you spot it?

In a future article we will revisit this topic, and look at the difference between metric and optical kerning; and, why it’s sometimes necessary to get our hands dirty and manually adjust kerning. We’ll also look at kerning for the Web (is it possible?), and alternatives to kerning pairs.

In the meantime, can you think of letter combinations that might require extra space (a positive kerning value)?

And finally, a TypeNuts cartoon, only I’ve omitted the captions. Perhaps you can come up with something better than mine: 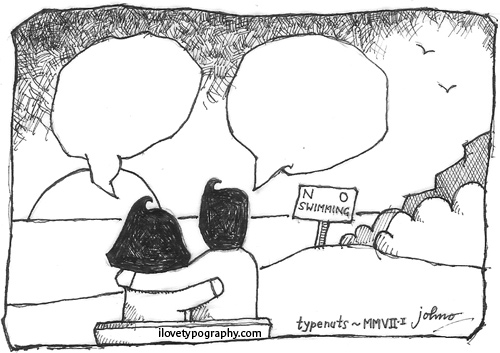 Ensure you don’t miss out on the next article by subscribing to I Love Typography.

next: 15 excellent examples of Web typography