Helmut Schmid, born 1942 in Austria as a German citizen. Studies in Switzerland at the Basel School of Design under Emil Ruder, Kurt Hauert and Robert Buchler.

Later works in West Berlin and Stockholm (covers for Grafisk Revy). After Montreal (Ernst Roch Design) and Vancouver he works in Osaka for NIA (for Taiho Pharmaceutical and Sanyo). 1973–76 at ARE in Dusseldorf he designs publicity material for the German government and the chancellors Willy Brandt and Helmut Schmidt. 1976 election campaign symbol for the SPD. 1978 exhibition of his politypographien at the Print Gallery in Amsterdam. Independent designer in Osaka since 1981. Member of AGI (Alliance Graphique Internationale) since 1988. 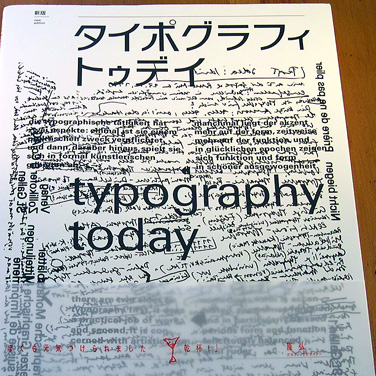 His syllabary face Katakana Eru, created during the years 1967 to 1970 with the purpose of achieving a harmonious relationship with the Latin alphabet, is today a trademark of his work. He is editor and designer of typography today (Seibundo Shinkosha, Tokyo 1980) and of a special issue of the Swiss TM (1973) on Japanese typography. 1983 lecture in Xian, China (typography, seen and read). His book design work includes the japan typography annual 1985, Takeo Desk Diary, and Hats for Jizo (Robundo, Tokyo 1988) with illustrations by nine-year old Nicole. He celebrated the fall of the Berlin wall with the publication 1989 11 09, typographic reflections 1. In preparation is Japan japanese, the book containing his series of articles which appeared in the Swiss Typographische Monatsblatter (1968–79).

previous: Welcome to I Love Typography

next: Helmut Schmid at ddd Osaka